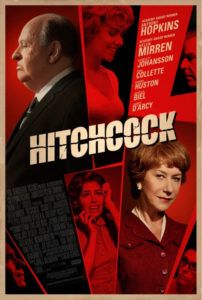 Director Sacha Gervasi’s trivial behind-the-scenes biography Hitchcock considers how in 1960, at the height of his popularity, the Master of Suspense made the riskiest move of his career to shoot what would ultimately become his greatest financial success, Psycho. Less about the production of that film than the relationship between Alfred Hitchcock and Alma Reville, his creative partner and wife, Gervasi’s film contains fewer informational tidbits than a Wikipedia entry on the subject. Gervasi, working from John J. McLaughlin’s screenplay, based on the book Alfred Hitchcock and the Making of Psycho by Stephen Rebello, treats Hitchcock the man like the dry, comically macabre figure who appeared on television each week to introduce the latest episode of Alfred Hitchcock Presents. As a result, the superficial film feels like a fantasy made by a Hitchcock fanatic instead of an accurate historical or biographical account.

The structure is not unlike last year’s My Week with Marilyn, wherein the audience gets to know the complex celebrity figure under the pretense of a film production, allowing us to see their stage persona and mere hints of their off-stage persona. Hitchcock opens at the 1959 premiere of North by Northwest, a stunning success for MGM. Hitchcock, played under layers of prosthetics by Anthony Hopkins, has a contractual obligation to Paramount Pictures to make another movie at their studio. As Hitch searches for the material for his next film and wonders if he’s passed his prime, Alma (Helen Mirren) wants him to tackle the new book by Whitfield Cook (Danny Huston), the writer of Strangers on a Train who has carried a flame for Alma ever since their collaboration in 1951. But Hitch is more interested in Robert Bloch’s novel Psycho, in which the character Norman Bates is based on maniac Ed Gein. Something about Gein’s ability to act out his repressed impulses strangely appeals to Hitch; that, and the fact that everyone tells him he’d be crazy to try elevating a low-budget slasher convinces Hitch to move forward.

Having long suppressed his sexual desires and acted them out onscreen and behind the scenes by obsessing over his frequently blonde leading ladies, Hitch finds Bloch’s story of voyeurism, cross-dressing, and murder relatable in a deeply personal way that Alma cannot understand. The personal significance is so powerful that he begins imagining conversations with Gein (Michael Wincott) in the killer’s Wisconsin home, these being rather inane sequences that imply far more disturbing parallels than were perhaps intended. Meanwhile, since Paramount refuses to finance such a picture except in a distribution capacity, Hitch and his agent Lew Wasserman (Michael Stuhlbarg) resolve to waive his director’s fee and put up the $800,000 budget by mortgaging his house, much to the chagrin of Alma. In her resentment, she finds herself considering an affair with Cook, while on the set, her husband struggles to bring his investment to life.

The actual making-of scenes show little of Psycho’s journey to the screen and offer even less insight into how the picture was made. Scarlett Johansson makes a believable and endearing Janet Leigh, whose respect for Hitch isn’t shared by her costar Vera Miles (Jessica Biel)—the actress who became pregnant during the prep for Vertigo (Kim Novak was cast instead). Most impressive is James D’Arcy’s dead ringer appearance as Anthony Perkins, his impression spot-on with Perkins’ quirks and fidgety movements. Brief mentions of troubled screenwriter Joseph Stefano (Ralph Macchio), composer Bernard Herrmann (Paul Schackman), Saul Bass (Wallace Langham), a bag of candy corns, and the famous shower scene are skimmed over, acknowledged obligatorily not because they naturally fit into the story Gervasi and Rebello want to tell.

More prominent is the relationship between Hitch and Alma, which is depicted as tumultuous and hindered by the director’s preoccupations. Of course, in the end, Psycho becomes a mega-hit, but only after its director realizes, quite melodramatically, that his pictures are “stillborn” without Alma’s input. She worked on nearly every Hitchcock script and almost never took the full credit due to her; the film at least acknowledges this fact. But in the end, it suggests something absurd—that Hitch learned some valuable lessons from making Psycho, even implying his repressed desires subsided by working through them during Psycho’s production. The truth is, after Psycho, they only became worse. Next, he made The Birds and Marnie, and on both productions, he all but tortured his star, Tippi Hedren. Later he made Frenzy, a film about a rapist in which Hitch explores some notoriously graphic rape scenes. Indeed, they did not live happily ever after as Gervasi’s film would have you believe.

This could and perhaps should have been a much darker film, less reliant on the ever-present quipping Hitchcock television persona we’re all familiar with. Hitchcock is a fluff piece for audiences who know nothing about Alfred Hitchcock and will have a lark seeing Hopkins don a few pounds of rubber makeup. Hopkins seems to have Hitchcock’s voice patterns down, though, at times, he slips into Hannibal Lecter territory; it’s more of an impression than an embodiment. Since Alma was a less public figure, critiquing Mirren’s performance remains more difficult. She brings her standard charisma to her role, particularly in one scene where Alma finally confronts her husband’s ways and leaves him speechless. The acting is top-notch all around, but Gervasi’s treatment makes one want to pick up a Hitchcock biography instead. I suggest Patrick McGilligan’s Alfred Hitchcock: A Life in Darkness and Light or François Truffaut’s famous interviews with the director.