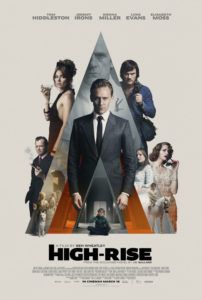 British society in the 1970s existed in a bubble constructed of consumerism and status, and J.G. Ballard’s 1975 novel High-Rise at once characterizes and bursts that bubble. In a dystopian pastiche of capitalistic society, the long-gestating film version of Ballard’s novel proves as surreal and unapologetic as its source. Featuring an impressive cast headed by Tom Hiddleston and Jeremy Irons, the film unfolds in a series of progressively more disturbing developments inside an ultra-modern apartment complex. Over the course of the film, all power, food sources, and social decorum break down in ways that test the viewer’s tolerance. We watch as this morbid microcosm descends into occasionally comic bedlam, resulting in out-of-control parties, a sad division of sexes, bursts of ugly violence, and a virulent strain of narcissism. The experience cannot be described as enjoyable; however, many may come to appreciate the anarchy’s commentary with distant admiration.

Ballard’s novel serves as a springboard for later books about the crumbling of social order after the fall of an establishment, such as José Saramago’s Blindness or several stories by Stephen King, such as The Mist or Under the Dome. When the lights go out and the watchers aren’t watching, a group of trapped people turns on itself and reveals the worst about humanity in the process. But unlike King, Ballard avoids pure entertainment value or a gimmicky hook. Ballard wrote in a visual symbology he called “the internal landscape of tomorrow that is a transmuted image of the past”—essentially writing about the future as a reflector for events in Ballard’s life, meaning the past. His brand of storytelling was far more didactic and imaginative than emotionally or dramatically engaging, cutting into his social subject with surgical precision and viscera. High-Rise was just one of a number of Ballard’s novels turning his then-contemporary world on its head through his often violent, psycho-sexual, and uncompromising narrative metaphors.

The story begins when Dr. Robert Laing (Hiddleston) moves into his spacious apartment on the twenty-fifth floor of a forty-story block. It’s the first of five still-in-construction buildings in a complex designed by a mysterious architect (Irons), who lives on the top floor. From the bottom up, the building’s residents slide up the class scale, with blue-collar working classes on the lower floors, and preposterously posh upper-class residents toward the top. That Laing is a physiologist and still remains fifteen floors from the top says something about who’s above him. But, without pretention, he’s also able to intermingle with those under him, such as the rowdy and appropriately-named Wilder (Luke Evans). When power begins to fail and food resources grow scarce throughout the otherwise operationally self-contained building, all semblance of culture begins to break down into a grotesque bacchanalia. Think a (slightly) less bloody version of Snowpiercer. Although, any film that features dialogue like, “He’s raping people he’s not supposed to,” couldn’t be described as anything but confronting.

Ballard’s original book followed his Crash (1973, adapted into a scorching film by David Cronenberg in 1996) and Concrete Island (1974, a post-modern riff on Robinson Crusoe). In each, Ballard’s almost impenetrable storytelling style could be called dreamlike, although it bears no particular resemblance to a dream. More like a heavily constructed and self-conscious nightmare. For decades, producer Jeremy Thomas has worked with filmmakers from Nicholas Roeg (Don’t Look Now, 1973) to Vincenzo Natali (Cube, 1998) to adapt the book with no results. Thomas finally locked director Ben Wheatley to take on the material, though Wheatley is best known for lower-brow genre fare like Kill List (2011) and Sightseers (2012). Then again, Thomas helped move body-horror maestro Cronenberg into very literary projects like Naked Lunch, Crash, and A Dangerous Method, so perhaps Wheatley is now on that trajectory.

Screenwriter Amy Jump, Wheatley’s wife, translates Ballard’s source, and she retains the original era arguably to a fault. Seventies fashion, cars, technology, and hairstyles (most distractingly) are abundant, while the CGI-rendered depiction of the apartment complex at the film’s center seems both from the future and past. The adaptation’s devotion to Ballard’s vision is a bold choice for modernist viewers wanting to see the original text; however, a freer and more post-modern adaptation could have related the book’s themes to contemporary culture, specifically the isolated and capitalism-obsessed American culture. Unfortunately, the film hasn’t deepened the role of women in the story; they’re reduced to symbols of various sexual meanings—from maternity in Elisabeth Moss’ pregnant housewife, to the anonymous droves of scantily clad whores occupying the parties of the higher floors. Still, Wheatley makes a brave choice to jealously preserve the film’s British-centric quality and 1970s setting, even if it means isolating a large portion of his audience.

Cinematographer Laurie Rose offers clean lensing of production designer Mark Tildesley’s sleek interiors and muted color palette. Wheatley and Jump teamed for editing duties, and they create a bizarrely effective rhythm to show the story’s progressive downward spiral. Images of the declining situation drop into the frame to create a kind of movement into the story’s extremes through a disjointed, but very functional style of montage. The often jarring-but-gorgeous effect reminded this critic of a video piece that might play in a museum of modern art. Among these shots, there’s a recurring visual metaphor that cannot help but burn a place on the viewer’s mind as the overarching theme of High-Rise: While instructing students, Liang pulls back the tissue from a cadaver’s face to reveal the skull underneath, a horrific reminder that beneath our artificial human façades reside the same base, animalistic framework. Loaded shots like this make a pivotal suicide in the film seem almost tame by comparison.

In the final scenes, Wheatley plays an excerpt of a Margaret Thatcher speech in which she praises the moral right of capitalistic values. For Ballard, capitalism resulted in an isolated, cannibalistic society in Great Britain where an unchecked narcissism fuels the individual, while in the meantime culture itself crumbles into sheer moral debauchery. There are perhaps better ways than Thatcher to make the material relatable for contemporary audiences, if that’s Wheatley’s aim (then again, Ballard’s work has never been widely relatable). Much like Cronenberg’s adaptation of Crash, emotions are kept at a far-off distance in place of a portraiture of an underlying cultural psychosis. For that reason, audiences will have trouble connecting with the material emotionally, particularly in the more carnivalesque second half. Intellectually, there’s a wealth of material here; but cinema is best when it engages both our hearts and minds at the same time. Nevertheless, High-Rise‘s artistic merits remain both fascinating and disturbing from a safe distance.