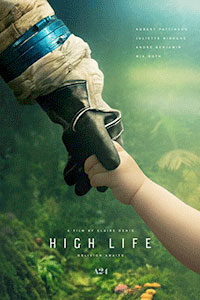 A mesmerizing but elusive study of primal emotions under the pretense of cerebral science-fiction, Claire Denis’ High Life is, unmistakably, a significant film. It’s the most expensive and, on the surface, commercially viable film ever made by the French auteur, who is often cited as one of the greatest living directors. But rather than embrace the conventions of her chosen genre here, she excises any need for the traditional film grammar or storytelling put forth in the guidebook for making a so-called successful film. It’s no more a pure science-fictioner than her 2001 effort Trouble Every Day was your run-of-the-mill cannibal movie. Denis somehow assembles a motion picture that has the production value and cast of a Hollywood feature, yet she does not betray her penchant for opaque filmmaking, preoccupations with the body, and entrenched symbolism contained within a nebulous framework. High Life is headlined by Robert Pattinson and Juliette Binoche, two of today’s best performers, who set out to explore black holes in deep space; however, the machinations of the plot may exist entirely as a pretext for whatever else is on Denis’ mind. It’s the sort of film that has the potential to be everything to everyone. And it’s no stretch to claim that it’s about life, death, everything in-between, and whatever awaits in infinity. Above all, it’s experiential viewing, where your response depends less on a clear breadcrumb trail left by Denis for you to follow, and more on something that taps into the subconscious.

With that in mind, I have searched my own impressions and reactions to High Life over the last several days since watching it. And I must admit that I remain unsure of how exactly to define what I saw or explain what it means with the self-assuredness I’ve had about other Denis films. From her debut Chocolat (1988) to her latest comic portrait of middle-aged desire in Let the Sunshine In (2018)—which was quickly made as the director waited for the cast and funding to come together for High Life—the elusiveness of her sci-fi confrontation has prevented me from thoroughly reading it after a single viewing. But rather than wait until I can confidently explain every hinted meaning or symbolic detail in the film, I feel that I must push through, tell you about what I saw and how I felt about it, and leave the rest to a second, third, or fourth viewing. It’s not insignificant to emphasize that, yes, indeed, I want to watch High Life again; if it were a terrible experience or unworthy of reconsideration, this would not be the case. But it’s also a humbling experience, in the sense that what I saw moved me, though pinpointing exactly why proves a challenge.

Let’s consider what Denis shows us. In the long pre-title opening, we meet Monte (Pattinson), one of two survivors on a space flight whose mission will be explained later in the film. Monte lives in solitude except for his infant daughter, Willow, to whom he talks via radio in the opening sequence. Behind a makeshift gate, the child watches on a monitor as her father goes out into space to repair some gizmo on the shuttle’s exterior, and her cries penetrate his ears, and the audience’s, with one of those eardrum-shattering baby screams. When he’s back inside a moment later, he comforts the child, though her continued crying leads to a near breakdown. “You’re killing me, you’re killing me,” he repeats when his attempts to calm the child have failed. Monte is a man unaccustomed and perhaps not innately equipped for childcare—he’s caught between his past as a criminal, when he was convicted of murdering someone who killed his dog, and his life of solitude with no one except his infant daughter. Back on Earth, he was susceptible to his violent impulses; in space, he has become something akin to a monk, desperate to suppress his earthly whims and desires. While isolated on a ship that races toward a black hole at nearly the speed of light—so fast that not even the light from passing stars is visible, only an absolute blackness—he is confronted by himself and those around him. 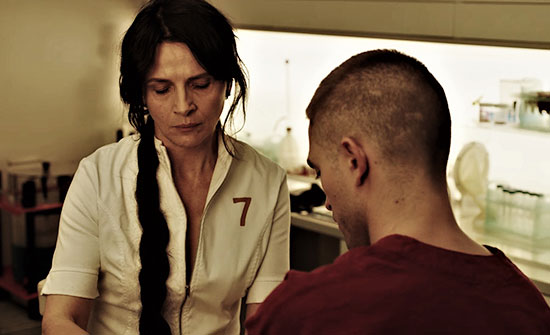 Later in the film, the viewer gathers the reasons behind what we’re seeing during an oddly isolated, expository scene between an earthbound Professor (Victor Banerjee) and a journalist (Juliette Picollot) on a train. An organization has commissioned the use of prisoners to explore deep space, locate a black hole, and run tests to determine whether the energy of a black hole can be harnessed for use on Earth. This primary mission is almost an afterthought in the film, however. It’s overshadowed by the fertilization experiments of Dr. Dibs (Juliette Binoche), the senior officer and doctor on board the spaceship—at least, back when there were other people on board besides Monte and Willow. Similar to her approach in White Material (2009), Denis’ story structure fades and cuts through time, creating an impressionistic view of the events and characters. Not long after Dibs is introduced, then, we know that one of her experiments must have worked, since Monte has a child later in the story. In the meantime, we watch as she subjects the station’s prisoners to a dehumanizing process: there’s no sex between the male and female inmates; the men must masturbate into a cup behind a curtain, and the women are inseminated with sperm via long plastic syringes. As she discovers, reproduction doesn’t work in space; every pregnancy before Willow has died due to radiation. And the experiments seem to escalate as Dibs degrades following the death of the captain (Lars Eidinger), her lover.

Because the travelers are prohibited from intercourse, they have access to a “Fuckbox” equipped with a metal, penis-like extension, dangling grips, and animal fur. Denis never gives us a complete look at exactly how it works, but Dibs enters at one point for a frenzied, undulating sexual encounter with a machine that spews out an unidentified white liquid on to the floor when the user has finished—it’s as though the machine ejaculates, as if it’s a conscious participant in the intercourse. How others use the sex toy room is uncertain. Aside from Dibs and Monte, the other crew members are peripheral and, inevitably, fated to have their corpses jettisoned into space as shown in the prologue. There’s Boyse (Mia Goth), who has no interest in becoming a mother; the sexually frustrated and aggressive Ettore (Ewan Mitchell); a calm gardener and family man, Tcherny (André Benjamin); and the severe female pilot, Nansen (Agata Buzek). Most of these characters inhabit the middle of the film in episodic segments, and the evidence of their fate is foreshadowed by dried blood spatter on corridor walls. To be sure, this is a bloody film, especially when it considers what happens to the human body as it enters a black hole. Elsewhere, Ettore’s attempted rape of a fellow inmate is a searingly brutal sequence of face punches, sexual violence, and bloodshed that will induce audible gasps.

Following the caustic substance of High Life, Denis and production designer François-Renaud Labarthe have created a science-fiction aesthetic far removed from the clean lines of utopian, NASA-esque science-fiction that have permeated the genre since IKARIE XB 1 (1963). The shuttle housing these doomed inmates looks like a weathered rectangle with thrusters, while inside, the cold and shabby rooms recall the blue-collar living quarters seen in Alien (1979). It’s a grim and functional interior designed by artist Ólafur Eliasson to resemble the prison of the future, where the inmates must record daily reports to ensure the life support apparatus keeps functioning, and their captors deliver random images of Earth life on television screens, seemingly as a reminder of what the inmates are missing. Each room has metal bars that Dibs can seal if she chooses; usually, that’s not necessary, as she keeps her fellow passengers sedated by slipping downers into the water supply. As for the science, Denis achieved some authenticity after consulting quantum cosmologist Aurélian Barrau and the writings of Stephen Hawking to complete the script, co-written by Geoff Cox and her frequent collaborator Jean-Pol Fargeau. It’s curious that just days after High Life opened in the U.S., scientists have captured the first images of a black hole in space, and they look eerily similar to the one captured in the film, complete with a reddish-orange shell surrounding a dark center—“a crocodile’s eye,” as one character describes it. 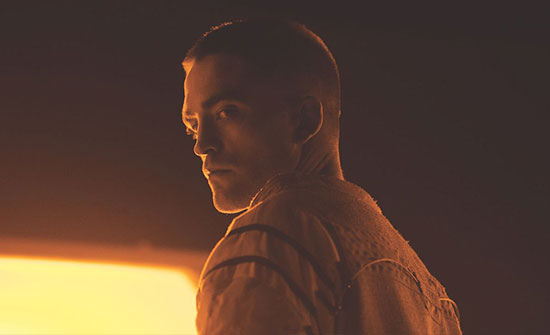 Shot by cinematographer Yorick Le Saux (Personal Shopper, A Bigger Splash), High Life invites, intentionally or not, comparisons to other films in the brainy sci-fi subgenre, both visually and structurally. The few flashback scenes on Earth have a grainy, color-desaturated look to them that recall Andrei Tarkovsky’s ventures into science-fiction, namely the earth scenes in Solaris (1972), where bodies of water symbolize the transitions of life, including one unshakable image of a dead dog here. Solaris also comes to mind aboard the spacecraft, where time exists as a fluid and transcendent concept given the amorphous structure employed by Denis and her editor, Guy Lecorne. Another shot of young people hanging onto a train on bumpy tracks resembles similar imagery from Tarkovsky’s Stalker (1979). Certain visualizations, from the lush gardens growing on the lifeless spacecraft to the singe-orange sight of a black hole’s event horizon, bring to mind everything from Danny Boyle’s Sunshine (2007) to Christopher Nolan’s Interstellar (2014)—although, it’s more likely a nod to Eliasson’s 2003 installation “The Weather Project,” where he tried to recreate the Sun in London’s Tate Modern. Finally, in a scene that seems to carry Monte and Willow beyond the infinite, the viewer cannot help but associate High Life with the ending of Stanley Kubrick’s 2001: A Space Odyssey (1968), as both take their characters from one plane of existence to another, mysterious one.

Though I’ve drawn many comparisons between High Life and other landmarks of the sci-fi genre, this should not suggest that Denis engages in a conscious form of pastiche; she resists it, concentrating less on the images themselves than their symbolic consequence and raw emotional power. The film is, I think, less about space than matters of isolation and loneliness, about how people either degrade or emerge stronger when given time to ruminate on themselves and their obsessions. Characters like Dibs and Ettore become inhuman monsters when imprisoned, and Denis recognizes that they are both victims of imprisonment yet both horrible in their actions. As for Monte, he transforms from a violent man to someone finally capable of loving another human being, even if the limits of his love for the teenage Willow (Jessie Ross), seen later in the film, may lead to an incestuous association as they occupy Adam and Eve roles in a realm beyond the known universe. Though it may be taboo, Denis doesn’t mind transgressing; she disregards the very notion of taboos and embraces whatever the situation demands.

It may be too lofty to call High Life a microcosm of humanity; then again, it may not be. Denis seems to liken the isolation of a few people trapped on a ship hurtling through space to the entire human experience. We’re all alone in a craft headed toward who-knows-what end, only our spaceship is a planet of limited resources, where we cannot help but carry out acts of violence toward one another, feed our desires in sometimes hideous ways, endlessly procreate despite the grim outlook for our progeny, and use up everything around us because we’re selfish. And when infinity presents itself, Denis seems excited to leap into the unknown if only as a break in the pattern of traditional human experience. She asks us to have the same curiosity, holding out a hand and asking, “Shall we?” Capped by an ambiguous final scene that may result in frustrated confusion or certain enlightenment, High Life will inevitably require further investigation and additional viewings, but at this moment it feels sublime, and in that, both impenetrable and full of possibilities.