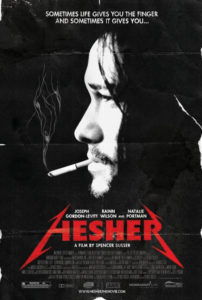 At first glance, the titular character in Hesher looks like a cross between Charles Manson and Jesus, and both he and the film itself pose just as diametric combinations. As played by Joseph Gordon-Levitt, this creepy loner who drives about in a black, rusted-out van showboats as an anarchistic, tattooed rocker with nothing to lose. He presents himself with a threatening disposition and spouts out strings of vulgarities that would make Sam Kinnison blush. But underneath his exterior of crudity and violent rebellion dwells a heart. And therein resides the problem with the debut film from co-writer and director Spencer Susser, who wrote the screenplay with David Michod from a story by Brian Charles Frank. They create a seemingly singular character as potent as fire, only to suppress his dynamism with a saccharine finale. Think of it as a feel-good movie for the death metal crowd.

In this update of Renoir’s Boudu Saved from Drowning (1932), an uncouth, uninvited guest squats in a suburban family home, and in due course, his unruly attitude awakens everyone from their dysfunctional malaise. The story, set in the San Fernando Valley sometime in the 1970s, centers on a pubescent boy, T.J. (Devin Brochu), whose mother recently died in a car accident. T.J. ventures out to sit in the wrecked vehicle at a nearby used car lot, afraid to let go. Meanwhile, Dad (Rainn Wilson) remains in a pill-induced grief stupor on the couch, and Grandma (Piper Laurie) grows closer to senility by the moment. And this is where Hesher enters the story, almost at random. He follows T.J. home, wholly unwelcome, and begins to live in his family’s house. Only T.J. seems to care, as with everyone stricken over their loss, they hardly notice the stringy-haired pot smoker watching porn on the couch in his underwear.

But then, no one much notices T.J. either. Brochu is spot-on as a troubled boy bullied at school and palpably devastated by the loss of his mother, with equal parts fear and burgeoning anger lingering under the surface of his vulnerable eyes. Also the sole family member worried over Hesher’s presence, T.J. tries to befriend the aggressive freak only to earn a trip to the police station after helping him set a late night fire—Hesher’s idea of male bonding. And then there’s the grocery store clerk, Nicole (co-producer Natalie Portman), who saves T.J. from a bully beating. His innocent crush on her catches Hesher’s attention; he starts with encouraging the boy to bed the girl and then to predictably pursuing Nicole for himself. This all leads to an unfortunate, dramatic funeral climax where Hesher drunkenly snaps his host family out of their coma-like mourning—a resolution that feels far too simple given the complicated emotions presented earlier in the film.

Levitt, currently best known from (500) Days of Summer and Inception, reminds us he’s an underrated actor capable of greatness. See The Lookout for further evidence. His character spends most of the film shirtless, displays his many tattoos (one on his back shows a hand giving the middle finger, and one on his chest features a stick-figure blowing its brains out), and spouts no end of verbal obscenities and harsh assessments. It’s a performance that makes this film worthwhile, at times riotously funny, and, at least in the first two acts, somewhat challenging. The rest of the cast plays what amounts to the same role, the lot of them sad sacks in the rut of their lives. In this company, Levitt’s standout performance was bound to outclass his costars.

Picked up at the Sundance Film Festival by Newmarket Films, Hesher combines indie movie trends from recent years by featuring another eccentric family brought together by another resident weirdo—akin to Little Miss Sunshine, except darker and angrier.If only the film upheld the confronting emotions and entertaining recklessness so shocking early in the film with an appropriately downturned ending, the result might not feel so inharmoniously optimistic upon reflection, regardless of Hesher’s behavior. With the final punch pulled, Hesher resolves to be a “safe” and altogether familiar film instead of something truly different. Mainstream audiences may fail to see the humor in the destructive behavior purveyed by Hesher, and ultimately T.J., but without doubt there’s a crowd for this material given the sunny day conclusion.