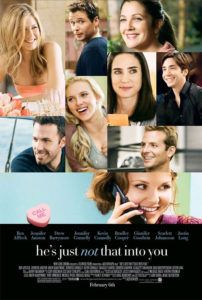 Rules and the exceptions to them. They’re the lifeblood of any self-help book that portends sensible truths about weight loss, self-esteem, a healthy sex life, or, in the case of He’s Just Not That Into You, the confusing world of dating. When trying to find love or companionship, we go through an absurd trial and error process that leaves our heads spinning. This movie attempts to bring some clarity to our second-guessing and help reevaluate those rules we make up, such as wait this long before calling a guy or girl after a date. This is silly. If you want to, just call. The entire message can be summed up within the movie’s prologue: A little boy pushes a little girl down and tells her she smells like poop. Her seemingly knowing mother suggests the boy did this because he likes her. A priceless confused look takes over the girl’s face as she tries to figure out what the hell her mother means. The message is simply that men aren’t always sending mixed messages. If they want you, they’ll let you know. If not, they’ll ignore you… or push you down and say you smell like poop.

The movie attempts to construct sitcom-ish storylines around the mantras described inside the 2004 text by Greg Behrendt and Liz Tuccillo. The structure of the book is broken into life-lesson chapters, each with a specific focus. But characters in a movie need to live and breathe, not find themselves confined within a preachy seminar. A film’s lessons are learned by drama, not because a chapter title tells us so. The film is a mosaic piece that screenwriters Abby Kohn and Marc Silverstein (Never Been Kissed) can’t assemble into the medley needed to bring the many stories within together. Of course, this person knows that person through so-and-so, so they’re all linked in some way, but there’s no organic, coincidence-based structure like Robert Altman or even Paul Thomas Anderson might assemble.

Gigi (Ginnifer Goodwin) has no brain for reading men, and so she checks her voicemail every two minutes and preplans not-so clever fortuitous meetings with beaus that never gave her a second thought. She meets bar manager Alex (Justin Long) who attempts to teach her, with blunt accuracy, what her prospective men are thinking. Alex’s friend Conor (Kevin Connolly) pines for his distant girlfriend Anna (Scarlett Johansson), who’s enjoying an affair with a sleazy married man Ben (Bradley Cooper). Janine (Jennifer Connelly), Ben’s wife, suspects not that he’s cheating, but rather smoking, and she’s furious about it. Meanwhile, Janine and Gigi’s coworker Beth (Jennifer Aniston) breaks up with Neil (Ben Affleck), her boyfriend of seven years, because she wants to get married, and it’s marriage or nothing.  Oh, and somewhere in there is Drew Barrymore in the role of Mary, who’s illiterate to reading signals from men in The Age of Technology.

Director Ken Kwapis organizes this throng of stories by jumping back and forth between them. Their connections are superficial at best, but each is interesting enough to keep us actively participating (versus the overrated Love Actually where only six-tenths of the storylines were involving). The film stops for chapter-like introductions and documentary-style confessionals with random and anonymous interviewees, the best comparisons to which are those in When Harry Met Sally. And sloppy bookend narration explains what we should learn from it all.

Unable to decide if they should retain the book’s self-help arrangement, make something like a mockumentary, or dive into full-fledged narrative, the script and its director fail to reconcile their awkward choices. What’s worse, the stories told take a decidedly standard romantic comedy path when each character ends up happy as a clam, which any real-life participant in the dating scene will tell you just doesn’t always happen. When a movie with so much truth inside snubs the possibility of a sad ending, the audience feels betrayed.

All this complaining on my part doesn’t mean I didn’t find myself entertained, however. The greatest benefit of this romantic comedy is that it contains both touching romance and light comedy, which, given its genre, seems appropriate doesn’t it? Problems with the composition aside, the stories will have audiences saying “I know just how they feel.” And since your standard Hollywood rom-com often avoids reality whatsoever, the mild dose of truth in He’s Just Not That Into You is both refreshing and welcomed.