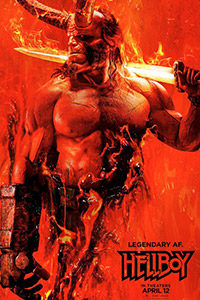 Hollywood decided to forego giving Oscar-winner Guillermo del Toro the creative control to write and direct the third entry in the Hellboy franchise, as the 2004 original and 2008 sequel weren’t unqualified breakthroughs. Without del Toro, the star of the previous entries, Ron Perlman, refused to don the red devil suit once more. Absent the original director and star, the third Hellboy movie became a reboot, as tends to happen, and audiences are left with the result. As unwanted as a personal phone call from a doctor, the new Hellboy is bad news. It replaces the original cast and crew with familiar faces and names from television, but their artistic authority is lacking. And the outcome seems like a cheap knock-off that tries to distract from its inadequacies with frantic pacing and the hard-R’s increased blood and swearing.

Hellboy is one of those movies that has you saying “Uh-oh” in the first scene, the first shot even. In a black-and-white prologue set in Arthurian times, Ian McShane, who replaces the late John Hurt as Professor Broom, provides a voiceover account of Nimue, the Blood Queen (Milla Jovovich). The camera begins swirling through lousy CGI landscapes, adopting those overwrought slow-fast-slow movements that Zack Snyder popularized more than a decade ago on 300. McShane’s voice, filled with sarcasm and enough “fucks” to rival Al Swearengen, tells us that Nimue was determined to take over the world, but she was stopped by King Arthur and Merlin, who dismembered her and hid the pieces in various locations throughout England. Director Neil Marshall, whose credits include the great horror film The Descent (2006) and two of the best Game of Thrones episodes, relies on flashy camerawork and ridiculous gore to communicate this information.

Cut to the present day, where Hellboy (David Habour, reaping the benefits of his popular role on Stranger Things), a government agent for the Bureau for Paranormal Research and Defense, engages in his usual overindulgence of alcohol and unsubtle covert action. For those unfamiliar, the movie offers a backstory that’s similar to del Toro’s original from 2004, but not exactly the same. Hellboy arrives on Earth after being summoned by occultist Nazis hoping for an edge in the Second World War, but Broom thwarts the Nazi scheme and adopts the devil child, honing his unique monster-fighting skills for good. Thus begins a father-son bond, except Broom hides the fact that Hellboy is fated to bring about the end of the world. Meanwhile, in a series of seemingly unrelated assignments involving vampires and giants, Hellboy comes to learn about evil forces, among them Gruagach (Stephen Graham), a boar-faced humanoid, working to resurrect Nimue. Once Nimue returns, she’s determined to join with Hellboy to unleash evil onto the world.

Screenwriter Andrew Cosby introduces various super-powered supporting characters, creatures, and set-pieces at a relentless speed and, given that Hellboy runs two hours, the pacing begins to wear on the viewer, numbing the mind. Hellboy’s usual sidekicks, the fish-man Abe Sapien and fiery girlfriend Liz Sherman, have been replaced here by the medium Alice Monaghan (Sasha Lane) and were-cat Major Ben Daimio (Daniel Dae Kim), who have achingly dull backstories forced unnaturally into the proceedings. These roles have none of the weight or emotional clarity with which del Toro wrote his characters. Elsewhere, a nightmare sequence with the demon Baba Yaga, who is bent on taking revenge on Hellboy for imprisoning her in another dimension, represents the single instance of a visually inspired fight. But somehow Marshall and editor Martin Bernfeld cheapen the sequence with frenzied editing, making it impossible to enjoy, or even notice, the details in Paul Kirby’s production design.

Perhaps worst of all, Cosby’s script resorts to a familiar arc for the titular hero, and the movie turns what should have been its most emotional moment into a laughable, painful-to-watch scene. The question throughout: Will Hellboy follow his destiny as the bringer of destruction, or will he follow the lessons taught by Broom? In a crucial point near the end, Broom, having been killed just before the third act, returns in ghost form—vomited up by Alice, who has the power to conjure the spirits of the dead from inside her stomach (don’t ask). McShane’s floating head appears on a poorly animated ectoplasmic body, delivering lines that should contain the dramatic crux of the Hellboy character, except that the visual realization of the sight is so laughably bad that it’s difficult to endure. It’s a What were they thinking? moment, in a movie that has many such moments.

You’d think the viewer would spend the duration of Hellboy contrasting it with the earlier, superior versions, dwelling on how no one wanted another iteration of the comic book character unless del Toro and Perlman were involved. Except, we’re far too busy feeling assaulted and bored by everything onscreen for such comparisons. It’s not merely that del Toro made two visually inspired, technically rich, and surprisingly touching superhero movies, it’s that Marshall has made an aggravatingly terrible version of the same material. At every point, Hellboy is disastrous; even the promising note of Harbour’s casting is ruined by the unfunny quips and sarcasm he’s forced to speak. Hellboy wants to appease fans with its bloodshed, rock ‘n’ roll soundtrack, and a copious number of monsters, but it’s an unfocused and messy reboot that lacks coherence or inspiration.