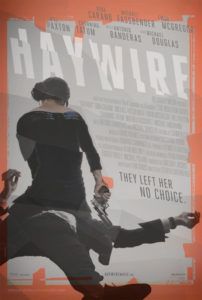 In Haywire, director Steven Soderbergh puts his penchant for inventive casting to wonderful use, as he combines his affinity for ensembles with his skill for exploring unknown actors. With films like Contagion, the Ocean’s trilogy, and Traffic, he employs numerous big name stars like Matt Damon, Kate Winslet, and Benicio Del Toro in key, albeit minor roles that supply consequence to a broader story. On The Girlfriend Experience, Soderbergh gave an unlikely actress, adult film star Sasha Grey, her legitimate screen debut. But for Haywire, the director makes an action hero out of mixed martial artist Gina Carano, a first-time actress whom Soderbergh discovered on television one night, and in turn developed the project around her involvement. The resulting film elevates the typical globe-trotting spy actioner into a work of formidable style and storytelling economy, a dash of hard-hitting reality thanks to Carano’s presence.

Carano plays Mallory Kane, a former-marine-turned-hired-gun whose smoky good looks give way to a lethal, spartan character not to be underestimated. We first see her entering a small coffee shop in wintry upstate New York, where she’s soon confronted by Aaron (Channing Tatum), an apparent associate. There’s a brief exchange before he attacks, and Mallory takes him down through a ruthless swap of blows. She escapes with young onlooker Scott (Michael Angarano) in his car, in which she recounts how she came to be the center of attention for international authorities and an elite group of privatized killers. Flashback to assignments in Barcelona and Dublin where she’s sent by her shifty employer, Kenneth (Ewan McGregor), the head of a clandestine firm that carries out off-the-books missions for the government. When Kenneth sells her out for money—what else?—she’s left to clear her name and seek out revenge for the betrayal.

The cloak-and-dagger plotting contains nothing audiences haven’t seen before, but screenwriter Lem Dobbs, who also wrote Soderbergh’s Kafka and The Limey, lends a streamlined austerity to the proceedings and makes the story feel sophisticated beyond its components. The material’s treatment and its adornments are what make Haywire an exceptional thriller, from Soderbergh’s casting to his mode of filming. Consider the cast of players supporting the unknown Carano: in addition to McGregor and Tatum, Michael Fassbender plays a suave but deadly MI6 agent; Michael Douglas plays a U.S. government official eager to put Mallory on the payroll; Bill Paxton plays Mallory’s father, a writer of modern warfare nonfiction; Antonio Banderas is a deliciously sinister figure who plots while stroking his graying beard. They’re all very effective in their limited roles, and as a result, they raise Carano’s role into a star-maker.

Using his usual pseudonyms (Peter Andrews as cinematographer; Mary Ann Bernard as editor), Soderbergh composes a lean 92-minute thriller shot with elegant camerawork and pieced together through economic cutting. In attendance is the visual style he’s employed on earlier works, where color filters and saturations express mood or locale. New Mexico scenes appear redder; scenes in colder climates are blue-hued; scenes involving a particular villain are rendered in black & white. He uses a 4K Red One camera for mobility and a wide-range of angles, but we’re always able to see the action. He never resorts to the industry standard “action movie style”, where handheld cameras shake about and the frame rattles with a frenzy of unintelligibility. Rather, Soderbergh presents his action without frills, allowing Carano’s talents as a fighter and the splendid choreography to take over.

In the film’s numerous fight scenes, the music—which comes with a hip 1970s vibe courtesy of David Holmes, who also made the music for Soderbergh’s Out of Sight and Ocean’s trilogy—drops out so the audience is left with nothing except the sound of the actors. We hear only thuds and crunches during these brutal fights, but mostly we’re watching in awe as incredibly realistic bouts unfold. Carano doesn’t pull her punches, and her costars on the receiving end (Tatum, Fassbender, and McGregor) aren’t playing nice either. Soderbergh strips away the usual Hollywood ornamentation used to disguise or distract from the presence of stuntmen onscreen, and shoots from a distance to allow the viewer full visual access to Carano’s heavy-hitting and impressive delivery of foot-to-face. This is a fighter restraining herself not to hurt her actor costars, and her skill (but not her restraint) is apparent in each one of the film’s extended fight sequences.

Like her character, Carano presence is sober, minimal, and hard-edged. She isn’t some former-model-turned-actress like Angelina Jolie or Charlize Theron, pretending her way through action scenes or gallivanting around the screen half-naked. Indeed, Soderbergh resists showing off her curves or transforming her into a sex symbol, as a more standardized production might have. Later in the film, someone says of her “You shouldn’t think of her as a woman. That would be a mistake.” True enough, as Soderbergh resists playing up obvious sexy-female-action-hero angles by representing Mallory as a capable, tough-as-nails character. Though Carano’s beauty carries her in an evening dress in one scene, her tomboy persona never dissipates, and her authority as such gives Mallory certain command of the screen. We believe she has the capacity to carry out her missions, outsmart her opposition, and exact reprisals with a believable amount of kick-ass. Though her dialogue and expressiveness are limited, Carano’s performance fits nicely into the requirements of a Jason Bourne-type character.

And with any luck, Carano will have earned herself a Bourne-esque franchise with Haywire, as the continuing adventures of Mallory Kane would be more than welcomed in future sequels, especially with Soderbergh behind the camera. But, as Soderbergh has recently avowed that his plans for retirement from filmmaking are moving forward, as quickly as 2013, the prospect of a Soderbergh-directed sequel is doubtful. What a shame. In part, because this film is a rarity: a solid, classy action movie that avoids the formal clichés of its genre and introduces an exciting new action star. But also, because Soderbergh’s recent films (including The Informant! and Contagion) have served as a reminder that he’s one of today’s best working directors. For his continuing output—balanced between inspired independent projects and commercial films of impressive craftsmanship—to suddenly disappear would amount to a major loss to the integrity and possible ingenuity of modern cinema.