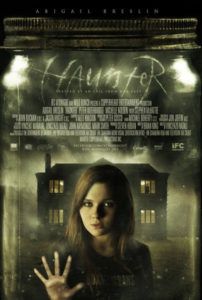 Like a mad scientist, Canadian director Vincenzo Natali enjoys putting his characters into a maze and watching how they react to punishing stimuli. Whether he condemns them to the ever-shifting machine of death in Cube, tests their loyalties in the futuristic corporate spy yarn Cypher, or tempts them with the endless possibilities and monstrosities of genetics in Splice, his characters always feel as though they’re on the examination table, under scrutiny if only so the audience can see what’s inside. The same is true of Haunter, Natali’s indie ghost story that combines elements from Groundhog Day, The Others, and The Lovely Bones into what is an interesting concept, but ultimately an overly familiar tale with few surprises and a prevailing sense of aimlessness. IFC Midnight picked the film up after its premiere at the South by Southwest Film Festival, and like most of Natali’s releases, it will perform better on video than in theaters.

Brian King wrote the screenplay based on his novel, which finds angst-ridden teen Lisa (Abigail Breslin), complete with Siouxsie and the Banshees t-shirt and dour expression, reliving the same day over and over—the day before her sixteenth birthday. Circa the mid-1980s, she suffers awareness of this temporal loop as her parents busy themselves with their routines, Bruce (Peter Outerbridge) fixing his car in the garage, Carol (Michelle Nolden) preparing the meals, their youngest Robbie (Peter DaCunha) glued to his game of Pac-Man. None of them are aware the same day keeps repeating itself, and when Lisa tries to explain what’s going on, her parents don’t believe her, not that they would remember once the cycle begins again.

Lately, the days have been changing for Lisa; she hears eerie whispers in the vents and looks suspiciously at a red door in the basement. Their house is something out of a gothic horror tale, surrounded by a perpetual, limitless fog from which Lisa cannot escape. The whole setup seems like a none-too-subtle metaphor for the feeling of hopelessness in adolescence, that is until the loop breaks with the arrival of a creepy telephone repairman (Stephen McHattie, from Pontypool). He confronts Lisa and wants to know how long she’s been aware of her flux, and then warns that if she tells her family or tries to talk with the whispers again, her family will be punished. Of course, Lisa breaks out the Ouija board and quickly realizes she and the spirits of several other young girls are living in the house, and that the mysterious man who contacted her is responsible for all of their deaths.

For much of the first two-thirds of this 97-minute feature, King’s script keeps us guessing as to what exactly is happening to Lisa and why her family’s behavior takes on sudden, uncharacteristic traits. But the journey to Haunter’s string of revelations is unimpressive, the material plagued by the independent production’s low-grade special FX (the CGI fog surrounding the house is particularly bad) and performances driven more by the requirements of the ghost story structure than what feels natural for the characters. In a way, only Breslin and McHattie have any acting to do, whereas the rest of the cast remains locked in the same few lines over and over. But Breslin’s considerable talent is wasted in a role where she wanders about trying to understand her predicament. Her character isn’t particularly clever or plucky, and if the plot didn’t corner her into resolving her situation, Haunter might never have ended.

Over the opening credits plays a cheap-looking animation where a sole butterfly flutters around shelves upon shelves of jars, each containing other butterflies. It’s a corny piece of symbolism for the events to come—about as understated as the house engulfed in fog—and Natali doesn’t do much with the imagery to create a visual motif to connect butterflies with the narrative. Natali tries to transform common supernatural elements into a labyrinthine story that will pack a profound emotional punch, except the film’s long segments of directionless searching prove a bore, and the payoff underwhelms. Haunter seems like the sophomore effort of a director you’ll never hear from again; not someone like Natali, who’s come close to greatness in the past. Never challenging or innovative, and consistent only in its fuzzy supernatural logic, the film is an empty exercise in atmosphere.