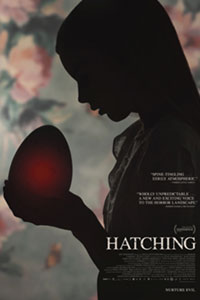 Critics often praise horror movies for their ability to fold genuine emotions or social issues into frightful symbolism. If a movie’s masked killer, demonic spirit, or grotesque creature can represent a significant idea that reflects our culture or some facet of the human condition, then it allows the genre to address more than pure entertainment value and thus elevates the art form. Hatching, from Finnish director Hanna Bergholm, supplies an allegory about growing up, bad parenting, and social media obsession. Many critics have praised the movie on these terms, remarking on its themes and use of symbolism worthy of a dark fairy tale. The story—about a 12-year-old girl, Tinja (Siiri Solalinna), who incubates a giant egg until a murderous humanoid bird-thing, her counterpart, emerges from the shell—captures the imagination with its loaded imagery. However, great movies should be about more than ideas; they’re also about how the filmmakers convey those ideas using the tools at their disposal. But, in almost every way, Hatching looks and plays like a made-for-TV coproduction between the Lifetime and SyFy channels, undercutting its otherwise inspired concept.

Working on a budget of around four million Euros, Bergholm delivers a movie that looks overlit and artificial, perhaps intentionally so. The resident Mother (Sophia Heikkilä) is an influencer, more concerned about her online image than her family’s health. The opening drone and smartphone shots of Hatching capture her so-called “Lovely Everyday Life”—a manufactured social media identity. She crafts her “everyday Finnish family’s” image with faux marble statues, flowery wallpaper, and carefully selected wardrobes. Her meticulous attention to detail extends to her children’s lives, Tinja most of all (whereas Tinja’s oblivious father, Jani Volanen, and brother, Oiva Ollila, go mostly ignored). Mother demands that Tinja fit into the family’s picture-perfect façade, pressuring her to remain thin and make the cut for an upcoming gymnastics competition. Of course, we eventually learn that Mother has no self-esteem, maintains an open affair with another man because she blames her current family for her sadness, and puts everyone through hell instead of facing her issues.

Early in the film, a raven bursts through the window of their idyllic home, spreading chaos. It’s a bad omen of what’s to come. That night, Tinja hears the bird, which should be dead after Mother shockingly wrung its neck, cawing from the woods. Tinja wanders into the dark to put the animal out of its misery and, when there, finds a large egg about the size of a fist. She brings it home and places it under her covers. Never mind how her parents don’t notice the growing oval, which, in its final stage, looks like it could contain a small person. When the creature emerges, it’s a fleshy, birdlike thing with patchy feathers and a twisted mouth—occasionally disturbing, often unintentionally funny—rendered unconvincingly with a mix of CGI and puppetry by creature FX supervisor Gustav Hoegen and special FX make-up supervisor Conor O’Sullivan. The scarcely credible creature shares a psychic bond with Tinja, so the monster attacks whenever she resents or grows angry with someone. Gradually, the bird-person looks more like Tinja every day, until eventually, they could be twins—aside from the cold eyes and facial scars from where a beak used to be.

Along the way, Bergholm explores body horror and disgust when Tinja has to feed her beast by chewing up birdseed and vomiting it into a bowl. There’s also some suspense as Tinja tries to keep her secret, named Alli after an unnerving Finnish lullaby about an abandoned child. If this all sounds weird and intriguing, you’re right. But frankly, the bird alter-ego proves less concerning than the behavior of Mother, who turns every moment with her children into social media content for her followers. By the final sacrificial scene, the whole parable becomes a lesson in self-love, suggesting we should embrace the dark parts of our personalities as much as those deemed socially positive: love yourself, whether you’re a trophy-winning gymnast, a grotesque bird-person, or somewhere in-between, even if your life does make for good content. The screenplay by Ilja Rautsi imparts these rather broad life lessons with heavy-handed dramatic effect and doesn’t have enough fun with the genre in the process.

Hatching is neither profoundly emotional nor particularly inspired as a creature feature, despite its family drama and murderous monster. On a technical level, most scenes look like a high-quality afterschool special, complete with a gracelessness to the cutting and lensing that gives away the amateur production. Of course, even C- and D-grade productions can result in an entertaining experience given the proper application of tone and energy. Unfortunately, Hatching drags at 87 minutes, pulling us through familiar scenes from daytime television with a modest helping of B-movie flair along the way. Clearly inspired by the storybook quality of The Babadook (2011), Bergholm doesn’t lean into that aspect enough and never quite pulls off the intended balance of domestic realism and fantastical horror. IFC Midnight picked up the movie at this year’s Sundance Film Festival, and there’s doubtlessly an audience for this fare. But the movie proves disappointing because you can see the unrealized potential in the concept, just as you can see how often it falls short.

(Note: This review was originally suggested on and posted to Patreon on May 31, 2022.)