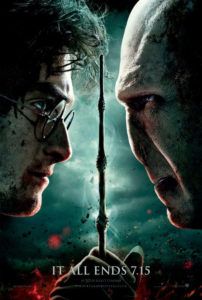 After ten years and now eight blockbuster films, it comes with a great sigh of relief that Harry Potter and the Deathly Hallows Part 2 brings a fitting end to this impressive franchise with a conclusion that will satisfy (albeit to varying degrees) both those devoted to the books and those only versed in J.K. Rowling’s magic lore from the cinema. From a critic’s point of view, the film must be viewed through several perspectives: first, and most obviously, as “the final film” of the ongoing series; second, as the direct sequel to Deathly Hallows Part 1; third, as a standalone entry in the Harry Potter continuation. From each standpoint, Deathly Hallows Part 2 performs on a superior level and delivers an experience that balances crowd-pleasing action with tender emotions. In other words, it contains all we’ve come to expect from the most profitable and among the most beloved franchises in film history.

After a momentary return to Deathly Hallows Part 1 as a refresher, the film picks up where its immediate predecessor left off. During the first half-hour, Harry (Daniel Radcliffe), Hermione (Emma Watson), and Ron (Rupert Grint) search in Gringotts Bank for the remaining horcruxes to defeat the dark wizard Voldemort (Ralph Fiennes). After that, at its most basic, Deathly Hallows Part 2 is an action movie playing with wizardly weapons. The story involves the forces of good bracing for the impending onslaught by the forces of evil. Once the epic battle begins with the siege of Hogwarts by Voldemort’s army of Death Eaters, the momentum doesn’t slow and the film’s relatively short running time (by Harry Potter movie standards) of two-hours-and-ten-minutes breezes by. It all leads to the inevitable showdown between Harry and Voldemort, which, reader of Rowling’s text or not, you probably know. Regardless, the result proves as stirring and dramatically significant a story as we’ve come to expect from these last few films.

For this fast-paced, grandiose farewell, screenwriter Steve Kloves, who adapted six of seven books (all except Order of the Phoenix), glosses over some of the finer details from the book. Just as with Deathly Hallows Part 1, some major characters meet their demise off-screen only to be accounted for during the aftermath with the brief appearance of a corpse. Some may feel not enough time was spent exploring the complex backstory of Albus Dumbledore (the excellent Michael Gambon), so crucial to this last tale, or discovering where favorites like Luna Lovegood (Evanna Lynch) or the now-heroic Neville Longbottom (Matthew Lewis) end up. With another half-hour of screentime and a heavier tone, no doubt these characters could have been given their due respect both during and after the battle. But Kloves and director David Yates (helmer of the last four films) also acclimatize Rowling’s material to cinematic demands. A smart, if sometimes wanting choice. Their economic storytelling and speedy tempo may not allow the viewer to soak up the rich side-character detail offered by Rowling’s source material, but the film ultimately arrives at a heartwarming station for our central trio: Harry, Ron, and Hermione.

In terms of production value, this entry reflects every Harry Potter film by sparing no expense in its display of wondrous special FX and impeccable production design. A scene involving a dragon crashing through its underground detention displays some very tangible looking CGI, some of the best in the series, whereas the barrage of black-magic projectiles bursting on the force field surrounding Hogwarts is at once gorgeous and horrifying. The single scene that doesn’t work is Harry’s interlude in a white limbo that has little to offer visually, except a bloody, decrepit creature that pushes the film’s PG-13 rating. Aside from this momentary deviation into blandness, and the unfortunate choice made by Warner Bros. to distribute the film in optional 3-D screenings (this franchise’s first), the production looks nothing short of expert. (Even if this critic still wishes Alfonso Cuarón had finished out the remainder of the sequels after Prisoner of Azkaban, by advancing the series with his personal signatures and bravado cinematic flourishes.)

Of course, drawing our attention more than wisps and zaps of CGI are the actors, a quality in which the Harry Potter films have always excelled. Radcliffe and Fiennes have the most screentime and give the most varied performances, the former demonstrating his impressive range and growth as an actor, while the latter embodies evil through and through. Ciaran Hinds joins the cast as Aberforth Dumbledore, brother of the late Albus, and Kelly Macdonald appears in ghostly form as Helena Ravenclaw. Almost every great British actor has played a role in this series, to the extent that major thesps like Jim Broadbent, Emma Thompson, David Thewlis, John Hurt, and Jason Isaacs now make only marginal appearances. Yet their talent serves to boost that of Radcliffe, Watson, and Grint, each of whom transcends their performances in the earlier films and reaches a definable maturity here.

The previous seven films’ worth of emotion has built up to these final moments, and every one of those feelings comes rising up into the throat throughout the course of the film. We have waited with anticipation for years to see how these ongoing storylines would play out, our nerves simmering until now, when we can finally revel in Harry confronting the duplicitous Professor Snape (Alan Rickman), watch as Ron and Hermione embrace their love for one another, chuckle as Mrs. Weasley (Julie Walters) finally gives Bellatrix Lestrange (Helena Bonham Carter) her due (with a little inspiration from Ellen Ripley, it seems), or finally watch Voldemort’s face fill with fear instead of evil malice for a change. We’re so filled with joy and terror and sadness for the duration that the experience proves exhausting. At one moment we cheer for a small victory in the larger battle, but the next moment we feel tears welling up during one of the more significant death scenes. Screenings will be filled with gasps and applause alike, as the film works on us like a rollercoaster of sentiments and thrills. Best of all, when it’s over, the saga feel complete.

The filmmakers involved have created something spectacular, not only with this final sequel but with the entire series. Imagine how future generations will look back to appreciate the consistency of the storytelling throughout the Harry Potter films, all nineteen-plus-hours of them. Regardless of momentous highs (Prisoner of Azkaban, Goblet of Fire) bringing those tolerable lows (the first Chris Columbus-directed two) down even further, this franchise, followed by millions the world over, has put forth a collection of films that nearly rivals Peter Jackson’s The Lord of the Rings trilogy in its regularity of artistry, distinction, and scope. Beginning with the innocence of disposable children’s fantasy and developing into an essential, grand epic of looming darkness, the franchise has taken moviegoers on an expansive journey that here makes a dignified exit and allows audiences closure. For that we must be thankful, and cherish the saga all the more in its entirety. And now it’s time to say goodbye to the Harry Potter films, which will be missed, but will be remembered fondly and returned to again and again by future generations.