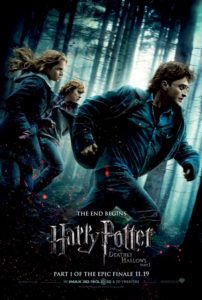 J.K. Rowling’s concluding episode to her series of fantasy books was just too epic for one movie. That, or Warner Bros. simply couldn’t resist making another near-billion in box-office receipts. Either way, just when it was becoming easy to approach the Harry Potter franchise with a sense of predictability from a cinematic perspective, the first part of Harry Potter and the Deathly Hallows arrives, looking and feeling nothing like the films that preceded it. Free-form in structure and visually unique for the series, the film boasts gorgeous location photography, some impressive acting by the leads, and dramatic weight unprecedented by the film adaptations thus far. Fans may be caught off guard by these changes in tone and atmosphere, but they signal that after nearly a decade of Harry Potter films, the series is finally coming to an end.

Perhaps it would be best to describe the film by what it’s not. This is not an ensemble piece, insomuch that the previous films have relied on countless characters to supply those delightful little details from Rowling’s magic world. Not so here. There’s no new ‘Defense Against the Dark Arts’ professor played by one of Britain’s finest actors in cameo. There are few wowing set pieces. There are no splendorous receptions at Hogwarts, nor do we visit Hogwarts at all—not one scene takes place on the school’s grounds. This means there are no student interactions, leaving the weight of the franchise’s penultimate film almost exclusively on the shoulders of Daniel Radcliffe, Emma Watson, and Rupert Grint. And the scenario doesn’t play out at the pace of a fantasy-mystery-thriller likened to Agatha Christie by way of J.R.R. Tolkien, as previous entries have.

Instead, the movie centers on the respective Harry, Hermione, and Ron as they elude Voldemort (a snakelike Ralph Fiennes) and seek out the various pieces of his Achilles Heel (called Horcruxes) for destruction, deepening their relationships along the way. No longer are they mere adolescents just barely evading danger thanks to the roundabout aid of wise professors. With Dumbledore dead and the magic world overtaken by Voldemort’s army of pseudo-Nazis, called Death Eaters, no one is watching over our heroes. On their own, they struggle to find clues into Voldemort’s evil plot, which involves the title’s “Deathly Hallows”—enchanted items that when collected will render the Dark Lord all powerful. A darkly visualized shadow-puppet animation tells the mythological tale of these items in the film’s most inspired sequence; stylistically, it’s unlike anything this franchise has offered before.

Director David Yates (The Order of the Phoenix, The Half-Blood Prince) returns for his third go-round, proving once again that he does his best work with small-scale scenes of human drama. Yates’ big action sequences are jumbled and occasionally hard to follow. Like something out of The Bourne Supremacy, a shaky cam sequence set in the woods proves unintelligible. In another sequence, globs of smoke zoom through the sky in a CGI-driven magic battle; the audience knows who to root for only by the color of the smoke (black = bad/white = good). But the solemn tone of the film prevails. Not one special effect is more impressive than the emotional range of Harry and Hermione’s somber dance, or the gravity of Minister of Magic Rufus Scrimgeour (Bill Nighy) executing Dumbledore’s last will and testament.

In many respects, this is a road movie, albeit a pensive one. Our trio of heroes brave hazardous terrain teeming with enemies, apparating and roughing it by foot as brooms would signal their whereabouts to Voldemort’s army. Shot on location in several wilderness exteriors throughout England’s countryside, the isolated young wizards and witch camp out and face adulthood. They reflect on the gravity of everything that’s happened over seven films, and in some ways redefine the significance of their friendships. Never have Harry, Hermione, and Ron felt so independent or fully rounded as three-dimensional characters, and several touching, even confrontational scenes emerge that showcase how talented these three actors have become. Alexandre Desplat’s musical score captures these subtleties beautifully.

Yet, while Yates and screenwriter Steve Kloves bring a sense of maturity to the franchise, their exposition of the plot falters occasionally, even disengages the viewer. Consider the contemplative scenes with Harry, where he looks for help in a shard of mirror. What is the significance of this shard? Although readers of Rowling’s books will surely know, the films have left out this detail (which should have been present since The Order of the Phoenix). This franchise is usually quite clear about such things, but not here, leaving audiences with only their best guesses to fill in the blanks. Or consider the many deaths in the film. Several characters die and only one is given a significant death scene; others meet their demise offscreen only to be referenced later on. Characters that we’ve grown to love disappear without a trace, leaving the involved viewer feeling slightly robbed. Granted, after six movies, the filmmakers no doubt assume everyone seeing the latest film already knows the story from the books (even if continuity between a book series and its filmic adaptations shouldn’t be considered interchangeable).

Surprising for its dramatic clout and atypical presentation, The Deathly Hallows, Part 1 will instantly challenge audiences to reconsider the formula-bound hands with which Yates has directed the franchise up to now. The pace will be called slow by those approaching the series as a simple diversion; measured or pensive are more affectionate descriptions, as Yates proceeds with patience toward the grim cliffhanger that cleverly sets up Part 2, due July 2011. Though lacking the artistic flourishes of Alfonso Cuarón’s The Prisoner of Azkaban, Yates nonetheless creates a most distinctive sequel, and broadens his directorial horizons along with the limitations of the Harry Potter saga in the process.