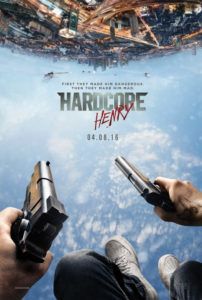 Gamer culture explodes onto the screen in Hardcore Henry, a nonstop rush of testosterone and violence that cannot help but exhilarate, regardless of thin characterization and the general air of videogame action and plotting. Ilya Naishuller of the Moscow-based rock band Biting Elbows wrote and directed the film in the same style of his popular music videos “Stampede” and its sequel “Bad Motherfucker”—both being shot from a subjective perspective, much like a first-person-shooter, except with fisheye lens quality. If all these descriptions sound foreign to you, chances are you’re not the audience for Hardcore Henry. Viewers most likely to find the material redeemable will be well-versed in videogames or have a particular liking for endless onscreen bloodshed and cyberpunk science-fiction.

The opening shots recall the scene in RoboCop when Murphy first awakens after being rebuilt from robotic parts. In the first-person shot, we see a pretty scientist (Haley Bennett) screw on the protagonist’s arm and leg, then tighten his vision, whose eyes we see through for the film’s duration. Our name is Henry, a salvaged human reengineered into a cyborg-warrior for purposes unknown by a mysterious group of scientists. The scientist’s name is Estelle, and she says we’re married. Within moments of standing, but before our voice module has been activated, armed goons attack the lab. They’re led by the blind and telekinetic albino Akan (Danila Kozlovsky), the resident super-villain who’s after Estelle’s cyborg-warrior technology so he can make an army. To what end? We don’t have the time or ability to ask. Probably world domination, though, because what else do you do with a cyborg army?

After making a daring escape from Estelle’s laboratory-in-the-sky via jet pod, our wife is kidnapped, and we must pummel endless mercenaries to retrieve her and stop Akan. That’s a pattern in Hardcore Henry. The camera sends us running and shooting into a situation that will bring us closer to Estelle, only to discover there’s something else we must blow up or someone else we must kill before rescuing her. Each clue or mission feels like a level in a videogame, and during each level we’re ushered along by Jimmy (Sharlto Copley). He’s our mischievous ally who adopts multiple guises and accents and dies repeatedly, presumably because he’s a series of clones. If this sounds like the barebones plot description of the latest first-person actioner, you’re spot on.

In addition to killing with no end of weaponry and hand-to-hand combat, there’s another macho strain running through the film, and that’s its unfortunate treatment of women. Hardcore Henry makes Grand Theft Auto look like a feminist platform. Every female appearing in the film proves to be a prostitute or promiscuous, and Estelle is no exception. That unfortunate truth aside, the technical execution of the action leaves us wondering, How’d they do that?! Given the amount of explosions and special FX jam-packed into this display, the small budget of $10 million suggests a massive degree of ingenuity on first-time director Naishuller’s part. Choreographing the illusion of mostly long, seamless shots with just a few obvious cuts amid the carnage is a monumental feat that should be acknowledged.

However, this critic can’t widely recommend Hardcore Henry to general audiences, but there’s certainly a subculture out there primed for this fun and electric ride—at least once. To be sure, doubtful I’d ever want to watch Naishuller’s film again, nor was I completely engaged for the entire 90-minute runtime (which seemed much longer than it was). Naishuller’s presentation begins to numb the viewer about midway through, leaving us hungry for the story’s few remaining kernels of plot instead of another of its chaotic set pieces. Watching the film is sort of like watching someone else play a videogame. For a while, you might be entertained by the sheer audacity and slap-in-the-face displays, but ultimately you’d rather be handling the controller. Hardcore Henry is undeniably well-made, but it doesn’t transcend its central gimmick.