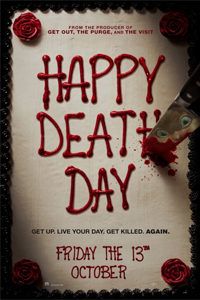 The latest horror programmer from Jason Blum’s scream factory Blumhouse Productions, Happy Death Day features a plot openly derived from the classic Bill Murray comedy Groundhog Day (1993). The film arrives on the heels of recent titles exploiting a similar time loop story device, including Tom Cruise’s alien invasion actioner Edge of Tomorrow (2014) and this year’s teen drama Before I Fall. Fated to live the same day over and over until they resolve personal issues or overcome the challenges set forth by the plot, the protagonists in these repetitive tales circle through the same day’s familiar events, each time approaching the identical situation from a slightly different angle. Applying a slasher skin with a victim doomed to die in a recurrent series of grisly murders, Happy Death Day has the potential to revitalize and even satirize the masked killer scenario; instead, the inspired hook fails to make the most of its chosen genre.

Mean sorority girl Tree (Jessica Rothe) wakes up on her birthday from a night of blackout drunk partying the night before, finding herself in the random dorm room of nice guy Carter (Israel Broussard), and the day’s remaining events haunt her in live-die-repeat fashion: She exits the dorm into the commons; rebuffs an environmentalist looking for signatures on a petition; dodges the unwanted advances of suitor Tim (Caleb Spillyards); returns to her sorority for a confrontation with her house leader Danielle (Rachel Matthews); dismisses the birthday cupcake gifted by her disgruntled roommate Lori (Ruby Modine); avoids phone calls from her father; visits her lover-professor, the snooty Gregory (Charles Aitken); and goes out that evening to find herself stalked and killed—by a knife-wielding figure in a black hoodie and fat baby mask (the university’s mascot), recalling ghostface from Wes Craven’s Scream (1996).

At the moment of her death, Tree respawns, and it all starts again in Carter’s dorm room. She’s forced to endure death after death, working alongside her new friend Carter through a laundry list of potential suspects and red herrings to discover her killer, without any explanation as to why this is happening (none is necessary). Langdon delivers a series of killings that fails to provide the viscera or sheer scare factor typical horror fans enjoy. The PG-13 rating delivers bloodless killings that rob the material of gory potential. Moreover, it’s difficult to feel frightened or invested in Tree’s death scenes when we know she’ll wake up the next morning and start over again. The screenplay by Scott Lobdell attempts to cap her ability to regenerate by suggesting her previous killings have left scar tissue and other physiological side effects, which seem to build with each new rerun, making Tree weaker each time she returns. But the filmmakers sloppily forget about this otherwise suspenseful time limit device almost as quickly as they introduce it. In that sense, Happy Death Day doesn’t feel as tightly structured as its time-looped predecessors.

The real standout is Rothe, who must play a snotty and self-absorbed college coed and a grounded, two-dimensional heroine, while also balancing both the scream queen and more humorous aspects of her character. As Tree becomes worn down by the process of reliving the same day, her inhibitions fade, and she advances from a damsel to a role with comic chops. Fortunately, Rothe has an expressive and animated face, allowing her to pull off the character’s quirkier moments, including some effective scatalogical humor and exasperated here-we-go-again looks. The entire film rests on Rothe’s shoulders, her ability to transition between a romantic lead, victim, badass who fights back, daughter, and student liberated from the petty social situations inherent to campus lifestyle. In each area, the film requires her to become a better person, and Rothe delivers. “You live the same day over and over again, you kind of start seeing who you really are,” Tree remarks, but her journey towards self-improvement seems to happen too quickly (after just over a dozen-or-so deaths), making her progression seem unearned.

Landon, whose last directorial effort on Scouts Guide to the Zombie Apocalypse (2015) was another missed opportunity for horror fun, doesn’t explore the full macabre potential of Happy Death Day‘s basic concept, making it more a comedy along the lines of Scream, except far less edgy. Rather than mine the material for everything it’s worth, the film spends too much time on Tree’s individual lives and not enough time building thrills or laughs by cleverly editing together long, persistent strings of the same repetitive interactions (think of the Bill Murray montages dealing with a dying bum, taking piano lessons, killing himself, etc.). What’s more, when the film reveals the killer, the moment feels shrug-worthy, regardless of the clever multiple-ending trickery in the last minutes. Setting aside any déjà vu from other time loop films (there’s an open nod to Groundhog Day), the film provides diverting entertainment, a solid lead debut from Rothe, but lacks the creativity to make it memorable.