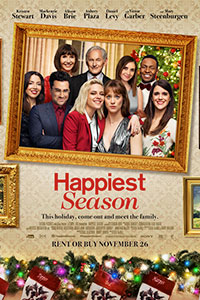 What do you expect from a romantic comedy set around the holidays? If you watch enough of these movies, you learn to lower your expectations. Usually, it’s enough that you have a few laughs, maybe swoon when the mismatched couple finally comes together in the end, and generally get into the holiday spirit. You might be tempted to wave them off with a dismissive If you’ve seen one, you’ve seen them all attitude, unless you’re part of the LGBTQ community, in which case a star-studded holiday rom-com about people like you isn’t so commonplace. Happiest Season would seem to correct that; however, its status as a mainstream queer Christmas movie isn’t what makes it worthwhile. It’s a genuinely feel-good kind of story that, despite the absurd situations and occasional leaps in character logic, warms you with holiday cheer.

Happiest Season belongs in a meet-the-family subgenre of holiday movies. You know the type. Everyone comes home for the holidays, where the dynamic between people who have spent years together proves strange and awkward for the poor sap who’s meeting their significant other’s family for the first time. But despite appearances, the family has their own issues, which come spilling out in a farcical fashion, making the outsider feel not so bad, thus part of the family. It’s a familiar formula, but rarely if ever has the story centered on a lesbian couple. Sure, Robert Downey Jr. played Holly Hunter’s gay brother in Home for the Holidays (1995), and there was a gay couple in The Family Stone (2005). Usually, gay characters remain on the periphery, the space allotted by Hollywood’s casual homophobia. But this mainstream release places a queer relationship in the spotlight in a relaxed way that doesn’t feel like it’s making an exception to the straight rule.

The story follows the relationship between Abby (Kristen Stewart) and Harper (Mackenzie Davis). Harper is bringing Abby home to meet her family for Christmas. Abby has no family of her own (leading to an extended cringe-worthy joke about orphans), and she hasn’t celebrated Christmas since her parents passed away, but she plans to use the occasion to propose. It’s not until the middle of the long car ride to Harper’s family home that she drops a bomb: Harper’s family does not know she’s gay. Worse, Abby will have to pretend to be Harper’s heterosexual roommate until after the holiday, at which point Harper will come out to her parents. Now, that’s asking a lot, but Abby goes along with it because she loves Harper. And so, not only is Abby forced to go back into the closet (quite literally when they stuff her in a basement storage room), but she also must contend with the pressures of meeting Harper’s conservative family.

The usual character tropes populate the movie. Harper’s parents, Ted and Tipper (Victor Garber, Mary Steenburgen), obsess over their public image because of Ted’s campaign to become mayor. Their need to project stability means that Harper coming out might be perceived as ill-timed. The icy sister Sloane (Alison Brie) is talented and successful but jealous that her parents favor Harper. The middle sister, Jane (Mary Holland), remains quirky and overlooked, regardless of her apparent imagination. Faced with these personalities, Abby is a clear outsider, and watching Harper’s new role as a straight woman becomes painful—especially when her ex-boyfriend Connor (Jake McDorman) and ex-girlfriend Riley (Aubrey Plaza) enter the mix. Utterly alienated, Abby is trapped by their deception, which escalates to the point of a situational comedy.

Watching Stewart operate with casual confidence, carefully navigating the comedy and romantic strains of the story, is a testament to her screen presence. She doesn’t have to do much, just offer a laid back performance that builds her character through sometimes humorous, sometimes emotional scenes. There’s undeniable chemistry between Stewart and Plaza in their few scenes together, and one almost regrets that these two don’t have more time together onscreen. On the broader side of things, Holland is often hilarious as the goofball sister, whereas Steenburgen resigns herself to fussy mom mode. Davis has the trickier task of playing a queer character who feels social pressure from her family to not have an identity of her own. Her uncertainty, viewed from Abby’s perspective, risks losing the audience’s sympathy—and for a while, she almost does.

It’s tempting to come down on Harper and her hurtful choices, and hope that Abby finds someone else who will treat her better (Riley, for instance). But then there’s a speech by Dan Levy (star and co-creator of Schitt’s Creek), who plays Abby’s best friend, John. He offers some sage advice, noting that everyone’s coming out story is unique, whether it results in rejection from your loved ones or unqualified acceptance. The moment is touching and true. And even if the script by Clea DuVall and Holland, who met on the set of HBO’s Veep, doesn’t quite justify Harper’s awful behavior, the happy ending still proves heartwarming in a warts-and-all sort of way. Although the viewer might not cheer when Abby and Harper finally patch things up, there’s still plenty to celebrate.

DuVall, who also directed the film, realized she wanted to come out while making But I’m a Cheerleader (2000), a satire about teens sent to a conversion therapy camp. DuVall came out to her own mother on Christmas, and she worked those experiences into Happiest Season. Even though the movie, which debuted on Hulu, contains ridiculous and even forced humor that recalls cringe-comedy scenes from Meet the Parents (2000), there is a feeling of tenderness at the center, largely due to Stewart’s genuine performance. By the time the movie brings everyone together for a family photo in front of the Christmas tree, and you’re grinning like an idiot because the scene makes you unreasonably merry, you know that DuVall and her excellent cast have done something right.