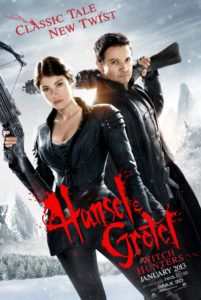 Doused in heavy metal music and subpar special FX, whose quality holds a last-impress date sometime in the 1990s, Hansel & Gretel: Witch Hunters takes aim at its cultish audience and misfires. The posters read “Classic Tale. New Twist.” But there’s hardly anything new or twisty about this humdrum period actioner based on the Grimm fairy tale. Recent efforts to freshen-up such classic stories with cheeky humor, hip characters, or grave undertones—see The Brothers Grimm, Van Helsing, Red Riding Hood, or last year’s dueling Snow White movies (Mirror, Mirror and Snow White and the Huntsman)—have failed to hit their mark in terms of contemporizing the material. Be it the fault of the filmmakers or the concept itself, something about leather-clad badasses who trek through antiquated Eastern-European countries to fight monsters with an elaborate, modernish arsenal just never seems to work.

For executive producer Will Ferrell (yes, that Will Ferrell), Norwegian director Tommy Wirkola makes his Hollywood debut with material closely following the temperament of Sam Raimi’s Army of Darkness (1992), which comes as no surprise since his Nazi-zombie cult favorite Dead Snow (2009) was littered with references to Raimi’s Evil Dead series. For his leads, somehow Wirkola snagged Jeremy Renner and Gemma Arterton, stars far too talented for material best suited for a SyFy Channel Original. As comic-book style heroes, they look and feel disjointed from their Medieval setting of Augsburg, Germany, parading around in flashy getups and speaking with American accents (despite Arterton being British and all supporting characters speaking with a German accent). They’re a far cry from Bruce Campbell’s chainsaw-armed Ash, whose modern presence in Army of Darkness’ Medieval world could at least be explained by time travel. Here, there’s no such excuse.

Taken out into the dark forest as children and abandoned by their father, Hansel and Gretel quickly learned that witch magic has no effect on them. In the subsequent years as adults, they’ve used this advantage to make a name for themselves as witch-killers-for-hire. Who knows how they procured a bunch of automatic weapons and fancy gadgets to help in witch slaying; the movie never explains. When it opens, our heroes are long-established the land over and contracted to a new assignment. Nearly a dozen children have gone missing in Augsburg, and so the Mayor (Rainer Bock) enlists their services to investigate, hurting the pride of the ineffectual and vindictive Sheriff (Peter Stormare). Tailed by a local lad (Thomas Mann) who has a bad case of hero worship, Hansel and Gretel quickly uncover grand witch Muriel’s (Famke Janssen) scheme to perform a ceremony that will grant her and her cohorts immunity to fire. Clues suggest the scheme somehow relates to their long-lost parents, but neither character seems too concerned with how. Prepare to battle yawns as the plot unfolds without a single unexpected turn.

Without a hint of characterization, Renner and Arterton move from scene to scene with little else to do except act out choppily-edited fight sequences and shootouts, most ending with a burst of gore as punctuation. Not even the intentionally campy, blood-soaked, R-rated violence throughout provides enough distraction from the dull personalities before us. Wirkola has written his heroes without character—no eccentricities, weaknesses, strengths, or identifying features whatsoever. There is no jokey banter, sexuality, or quirks. No emotional conflicts for our heroes to overcome, no romance, and no stakes worth investing ourselves in. They may as well be cardboard cutouts up there on the screen. What a waste of Renner and Arterton’s talent, as both are capable of so much. With Renner’s track record, the good (including The Avengers, The Town, and The Hurt Locker). outweighs the bad; whereas Arterton’s rare instances of real acting (see Tamara Drewe or The Disappearance of Alice Creed) have not yet prevailed over her attraction to crap (don’t see Prince of Persia or Clash of the Titans).

In the end, there’s nothing to bond us to the material—only a series of witchy obstacles defeated without much effort at all. Forgettable 3D, cheap-looking CGI, and generally uninspired creature designs don’t improve matters much. Wirkola’s witches look like splintered porcelain dolls with cracked white skin and blackened eyes, much akin to the cave witch in Tim Burton’s Sleepy Hollow, another clear influence. Wirkola’s witches are protected by a guy-in-a-suit troll named Edward (voice of Robin Atkin Downes), this one with a heart of gold. By no means a miracle of animatronics or body suits, the Edward character looks like a rejected concept for The Garbage Pail Kids Movie. When searching for the perfect comparison, one can’t help but liken Wirkola’s efforts to those of Uwe Boll. Of course, Wirkola doesn’t have Boll’s fondness for beating up critics. Not yet, anyway. If he makes another stinker like Hansel & Gretel: Witch Hunters, he may change his mind.