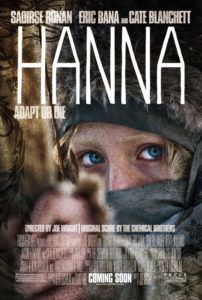 Joe Wright’s Hanna combines elements from fairy tales and ultra-modern action movies to construct a thriller of uncommon energy and style. Relentlessly paced, the film takes off running within the first scenes and doesn’t let up until the whimsically dark finale. Notable location shooting throughout Europe, a dynamic visual presentation, thumping original music by The Chemical Brothers, and the all around impressive performances make familiar material feel reinvigorated. Wright’s direction, as demonstrated in Atonement and the 2005 rendition of Pride & Prejudice, contains enough control and artistic flourish to elevate the material from your usual mainstream actioner into a suspenseful drama. The exciting outcome has the potential to strike a nerve with both arthouse crowds and average moviegoers.

Wright and screenwriters Seth Lochhead and David Farr have constructed a brutal, contemporary Grimm storybook that also draws narrative components from The Professional and The Bourne Identity. Deep in a Finnish forest, the 16-year-old Hanna (Saoirse Ronan) lives with her father, the wanted ex-CIA operative Erik (Eric Bana), who has trained her to be an elite killer. Erik has waited for this time to come, as Hanna is old enough and strong enough to go out on her own. With that, Erik allows Hanna to flip a switch on a transponder that alerts the CIA to their presence. And so begins a journey for Hanna, which takes her from their isolated forest home to an underground interrogation complex in the Moroccan desert, from learning about the ‘real world’ of electricity and music to reconnecting with her father in Germany.

Along the way, Hanna follows a plan set by Erik, wherein she is to assassinate the CIA handler that killed her mother: Cate Blanchett plays Marissa Wiegler, a Wicked Stepmother-cum-Big Bad Wolf role. Though she’s not given much background, Marissa has just enough obsessive-compulsive quirks and eerily calm mannerisms to make her an effective villain. As she obsesses over her perfect capped teeth in a mirror close-up, one can’t help but think But Ms. Wiegler, what big teeth you have! Marissa hires a trio of German goons, led by Isaacs (Tom Hollander), to stalk Hanna. Meanwhile, Hanna hitches a ride with a family on a road trip holiday—Olivia Williams and Jason Flemyng play the parents to Jessica Barden’s sharp-tongued teen Sophie, whose pitch-perfect OMG-isms lighten the mood at the film’s center—and sees what she’s missed living in the forest all her life. Sophie becomes Hanna’s first friend, and with her our anti-heroine begins questioning her abnormal upbringing.

The Oscar-nominated Ronan trained for months prior to shooting to physically prepare for the role, becoming versed in martial arts to lend Hanna its impressive authenticity. The young actress’ training paid off, as she executes complicated fight scenes with ease, and earns herself “The Tom Cruise Award” for best running. It’s still shocking to think that Ronan is only as old as her character, yet manages to capture both the unrelenting cold of the killer inside her, as well as the innocence of a child with no exposure to the world. One scene features Hanna bombarded by the presence of modern technologies; having lived in a quiet woodland her entire life, the sudden sound and movement of television, a ceiling fan, and a fluorescent light equates to chaos. And despite her considerable supporting cast, Ronan’s incredible, complex performance remains the film’s centerpiece.

An ongoing fairy tale motif allows this actionized storybook to close as plainly as it opens and arrives at the last page without needed hints toward a sequel. (How rare to have a self-contained action movie so unconcerned about establishing a franchise!) Its bookend structure, indicated by a line of dialogue, brings the tale to a satisfying and absolute conclusion that has more intangible poetry to it than significant purpose. Wright incorporates all sorts of visual and aural style with Grimm iconography, and the result is absorbing and energetic. Consider the dilapidated, wonderfully haunting Spreepark locale at the climax or the inspired use of “Peter and the Wolf” on the soundtrack. Wolves, innocent children, and inexplicably evil villains give the film a classical appeal within its post-modern edge, the outcome being a fairy tale alternative to those interested but ultimately disappointed by something like Red Riding Hood.

In a way, Hanna is an exercise in pure kinetic energy. Wild but coherent editing during action scenes is offset by moments where Wright demonstrates his self-assuredness behind the camera. One slick Stedicam tracking shot rivals the one in Atonement—cinematographer Alwin Kuchler follows Bana from a bus station, through a terminal, into an underground walkway for an ambush. The film’s few, carefully measured action sequences are further enhanced by the unrelenting narrative turns, the electronica score, and Wright’s craft. There may not be as much grand meaning or deeply affecting substance when compared to his previous works, but Wright and company have created an exciting story, richly told with copious amounts of style. When so often a thriller of this sort has no story and even less style, a film like Hanna is something to be excited about.