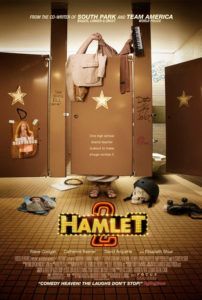 Did you know there’s a Hamlet 2? Shakespeare’s original Hamlet ends with all central characters dead, so the mere concept of a sequel is ludicrous, if intriguing. You might wonder, Did researchers uncover some long lost manuscript written and subsequently kept hidden by Shakespeare himself? Alas, no. The play is the subject of a base-based movie starring British comedian Steve Coogan, who plays Dana Marschz, a high school drama teacher that writes the sequel himself to save his school’s dying theater program. If Shakespeare is hallowed ground, you could argue this film unzips its pants and defecates all over his work. But who could ever live up to such a lofty comparison?

“Why does everyone have to die in the end, anyway,” Marschz wonders of the original text. He has no concept of high drama, and despite thinking himself a serious artist, Marschz seems to know he has no talent for acting or writing either. He’s a pathetic sort, frequently begging for attention by reminding everyone his father didn’t love him. A recovering alcoholic, his wife Brie (a scathingly funny Catherine Keener) doesn’t resist bringing up his infertility in public. She’s bitter that they’re so poor they’ve had to take on a boarder, the almost wordless numbskull Gary (David Arquette).

Mr. Marschz gets even less respect in the classroom. His two teacher’s pets Rand (Skylar Astin) and Epiphany (Phoebe Strole) earn terrible reviews for his abysmal stage versions of Erin Brockovich and Mississippi Burning by the school’s resident critic (Shea Pepe), a pre-teen who chats with Marschz on his failing method on the way to recess. When Marschz’s new class assembles for the first time, he finds it populated with Latinos he immediately assumes are gang members; and so, taking inspiration from his favorite movies about great teachers (Dead Poet’s Society, Mr. Holland’s Opus, and Dangerous Minds), he attempts to inspire them.

Problem is, like all the other failing arts programs in the Tucson, Arizona school, the theater will be shut down unless Marschz can raise a whopping $6,000. Marschz resolves to focus his attention on completing something new, not based on an already popular motion picture; he resolves to write a sequel to The Greatest Play Ever Written. Executed through a series of pop-culture references, campy songs, time travel, and a version of Jesus with “a swimmer’s bod,” the resulting product gathers the worried attention of local parents, religious devotees, and the school board. Principal Rocker (Marshall Bell) bans Marschz from the premises after reading the play, claiming it pornographic. Luckily Marschz’s impassioned students erect an alternative stage in an abandoned railway warehouse.

As for the obscene content, the Bard didn’t exactly shy away from sexual and scatological humor himself. Then again, he didn’t commit entire acts in his plays to the theme of being “raped in the face.” Indeed, Marschz’s play is graphic, offensive, unrelenting, and downright hilarious in that this is so wrong way. On his side is Cricket Feldstein (Amy Poehler), a foul-mouthed member of the ACLU. She believes anything goes when it comes to freedom of speech, and her interpretations of those laws are sketchy at best. When parents demand their children be pulled from the play on The Big Night, Cricket insists all parental rights are dismissed once they signed the consent form—there’s no taking back their signatures.

And then there’s Elisabeth Shue, playing, um, Elisabeth Shue. Turns out the actress from Adventures in Babysitting and Leaving Las Vegas has turned her back on Hollywood in favor of becoming a nurse in Tucson. She insists she can’t handle the two-facedness of The Biz anymore, though she misses making out with all of her hunky costars. Her appearance in the movie feels odd, but it’s nice to see a celebrity poking fun at themselves.

Director Andrew Fleming co-wrote Hamlet 2 with Pam Brady, a frequent collaborator with Trey Parker and Matt Stone of South Park fame. Just as with that show, there are hints of commentary in the film where if we squint we might just walk away with some social significance, but mostly we’re just laughing at the outrageous moments of mockery toward Shakespeare’s play and religion (the film’s song “Rock Me Sexy Jesus!” is already a hit). When it comes down to it, the play ends up being funnier than the movie. Perhaps down the road, we’ll see a fully realized version of Hamlet 2 on Broadway, complete with light saber battles and music by the Tucson Gay Men’s Chorus.