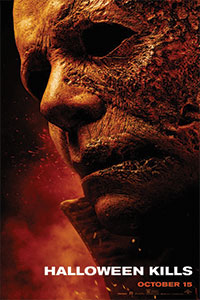 John Carpenter’s Halloween (1978) remains a classic because of its ambiguity. Watched in isolation from its seven sequels, two Rob Zombie remakes, and a retconned sequel by David Gordon Green, the original is a modest and restrained slasher. It’s about a few teenagers stalked and killed by a masked lunatic named Michael Myers, and the fanatical Dr. Loomis who hunts his former patient and believes him to be evil incarnate. The question of Michael’s humanity has preoccupied the series and discussions about it ever since. Is he a singularly unstoppable man devoid of empathy and bent on killing, or does his physical form represent an embodiment of evil that must be exorcised? Loomis and Laurie Strode, the original “final girl,” thought Michael was a Boogeyman—The Shape, as the original script called him. Not knowing the answer made the original scarier. In Halloween Kills, Green’s sequel to his revised Halloween from 2018, characters have this debate in open conversation, intellectualizing and verbalizing the subtextual dread of the original. It’s a conceit that stops the movie’s momentum dead in its tracks.

Green’s first Halloween earned a hefty sum at the box office, over $200 million on a $15 million budget, following a saturated promotional campaign by the producers at Blumhouse. The result was a mixed bag: chillingly filmed violence; a committed performance by Jamie Lee Curtis as Laurie, now a survivalist bent on killing Michael; and a whole bunch of leaps in story logic to justify its fan-fictional alternate reality. Halloween Kills is less a sequel than a middle chapter to a trilogy that will reportedly continue with next year’s Halloween Ends. Thus, it follows the tired trilogy rule of a darker second film—leading to countless fanboy comparisons to The Empire Strikes Back (1980). But the screenplay by Green, his longtime collaborator Danny McBride, and up-and-coming horror writer Scott Teems turns the experience into something mythologically overwrought. The movie’s characters speak in grand declarative statements about evil and commit themselves to lofty causes, making the whole thing feel a million miles removed from a few murders on an autumnal suburban street in Haddonfield, Illinois.

It’s ironic because the whole point of retconned sequels—besides the apparent exploitation of intellectual property for commercial purposes—aims to correct mistakes made by the original sequels. In this case, Halloween Kills presupposes that everything after the original never happened. But the new follow-up makes different mistakes but no less absurd (the original Halloween II (1981) introduced a wrinkle about Laurie Strode being Michael Myers’ long-lost sister). Green’s latest creates elaborate new mythology with several tiresome flashbacks that muddy the waters, but just like Halloween II, it feels more interested in advancing the body count, not the story or characters. Accordingly, the new film begins by going back to 1978 to fashion more backstory. It supposes that after Loomis shoots Michael, who then falls out of a window and disappears from the lawn below, the local police corner and capture him. Just before that, one of the cops, a young Officer Hawkins (Thomas Mann), accidentally shoots his fellow officer (Jim Cummings) while trying to take out Michael. Hawkins, if you recall, is played by Will Patton in Green’s 2018 movie—and it turns out Hawkins survived a stabbing to the neck. Hospitalized, he declares revenge on Michael. 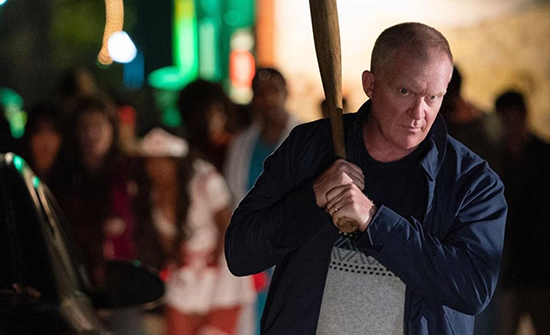 Despite the Hawkins-centric flashbacks, he remains in a hospital bed for the entire movie. So does Laurie Strode, for that matter. In their place, Halloween Kills follows a group of vigilantes determined to stop Michael Myers for good. Now all grown up, Tommy (Anthony Michael Hall) and Lindsey (Kyle Richards), whom Laurie babysat that fateful night in 1978, assemble a posse of angry Haddonfield residents armed with baseball bats and firearms. They’re joined by Lonnie (Robert Longstreet), Tommy’s former bully who also receives a flashback or two, and Marion (Nancy Stephens), Loomis’ former nurse. The screenplay spends a lot of time adding to the events in Carpenter’s original to clarify its version of these characters and their motivations. As a result, Halloween Kills doesn’t feel propelled; it’s constantly taking a few steps back to take a few more steps forward in the present. The movie feels like it’s preparing for a showdown that never occurs during the 105-minute runtime. Rather, it’s building toward Halloween Ends, giving Green’s overall treatment the feeling that it’s more interested in series-building than storytelling.

Indeed, the movie feels like a throwaway episode whose theme centers on a town brought together by the tragedy of so many impacted by Michael Myers. Tommy leads the throng, announcing, “The Boogeyman is at large!” His angry mob responds with vengeance on the mind, repeating, “Evil dies tonight!” But their behavior reminds us that nothing good can come from a crowd of angry people chanting—they target the other mental patient who escaped alongside Michael, whose hardly a vicious killer. Laurie’s daughter Karen (Judy Greer), the only character who feels compelled by emotions rather than the script’s machinations, tries to stop Tommy’s mob justice to no avail. They realize too late, “Now he’s turning us into monsters.” To be sure, the script overemphasizes every point. Take how Laurie and Hawkins, isolated to a shared hospital room, come up with the random assertion that Michael will only die if Laurie sacrifices herself, like two particles dawn to each other only to neutralize their energy. They both make declarative statements that feel written for the trailer: “It needs to die,” says Hawkins. “And I’m the one who needs to kill it,” Laurie adds. This is not a subtle movie, and the abysmal dialogue obliterates any hope for subtext.

If Green’s first stab at the franchise made small stylistic departures from the aesthetic of Carpenter’s original, his approach to Halloween Kills feels like another universe entirely. Choppy editing and shaky-cam action replace the steady, low-key master shots that defined the 1978 version. Consider the early sequence where Michael emerges from Laurie’s burning home and proceeds to slaughter nearly a dozen firefighters. While Michael uses axes and a circular saw to cut through them, blood splatters on the camera. Green employs victim POV shots, watching from inside a firefighter mask as the killer plunges a rod into a victim’s face. The movie takes a stylistic leap in another direction, resulting in blunt-object filmmaking reliant on cheap thrills, slow-motion, and an overabundance of gore. Worse, the movie treats the audience like we’re stupid. Not only does Green use flashbacks to deepen the mythology, but he also uses them to remind the audience what happened in the 2018 movie—a cheap move that doesn’t respect the audience’s intelligence.

Halloween Kills is best when it’s focused on new characters and moving forward. For instance, the scenes with Big John (Scott MacArthur) and Little John (Michael McDonald), the couple living in the former Myers house, feel like throwaways but refreshingly not dependent on digging up the past. Unfortunately, the screenplay is obsessed with old characters, remembering what happened in Carpenter’s film, and even inventing new events that occurred just after the original. In doing so, it almost entirely sidelines Allyson (Andi Matichak), Laurie’s granddaughter, and arguably the main character of Green’s Halloween, in favor of her mother. And while Greer is the movie’s best asset, it’s an awkward dramatic shift. Instead, the movie becomes a shining example of what’s wrong with retroactive continuity. Green attempts to pay homage while creating something new, but his dependence on the past stifles any hope of forward narrative thrust. More often than not, retconned movies are hollow and convoluted revivals of old franchises, and this one is no exception.