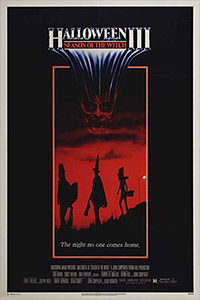 In Halloween III: Season of the Witch, timeless mythological horrors seep into the technological age. It’s a motif signaled by the title sequence that riffs on those in Halloween (1978) and Halloween II (1981), which featured carved pumpkins against a black backdrop, and here features an 8-bit jack-o-lantern forming on a television screen. John Carpenter and Alan Howarth’s synth score, adopting a theme dissimilar from its predecessors but no less ominous, relays a feeling of electronic dread. The movie’s blend of mysticism and anxieties about the unknown threat of advancing technology—and released a year before War Games (1983), no less—represents a welcomed change to the franchise’s stalker formula. If successful without Michael Myers, it would have been the second story in an ongoing series of movies dedicated to the notion of Halloweentime horrors, long before the concept of a cinematic universe had taken hold of Hollywood for the foreseeable future. Alas, the movie’s critical and box-office failure meant Michael Myers would return to the screen, but the novelty of its cruel anti-child and anti-capitalist streak deserve some belated appreciation.

Carpenter wasn’t attracted to the idea of Halloween because of a masked psycho-killer on the loose; he was interested in exploring those ancient fears of All Hollow’s Eve. Accordingly, Carpenter and co-writer Debra Hill wrote about a babysitter killer and referred to Michael Myers as The Shape in their script, acknowledging his status as the Boogeyman—an abstract, albeit frightening idea far more spiritual and other-worldly than just another maniac with a knife. If the festival of Samhain was, in history, the period when the world of the living overlapped with the spirit world, then the subsequent commodification of Halloween with rubber masks and candy demanded a corrective effort. Carpenter’s Boogeyman brought the fear back to the holiday—particularly in a grisly scene from Halloween II in which a child bites down on a razor blade hidden in his candy, part of a freaky urban legend alongside poisoned apples and needles. He reminded us that Samhain is a time people should fear, not celebrate with the visages of their favorite intellectual property.

With this in mind, Carpenter met with British author Nigel Kneale, creator of Professor Bernard Quatermass, the scientist character who had appeared in several films, including The Quatermass Xperiment (1955) and Quatermass and the Pit (1967), as well as Quatermass serials on British television—all admired by Carpenter. Kneale’s approach to science-fiction and horror echoed those 1950s ideals that aligned with Carpenter’s sensibilities in their exploration of the unknown, faceless, and sublime. Carpenter’s Prince of Darkness (1987) was an homage to Kneale’s stories, right down to the presence of the fictional Kneale University in the film. Planning a new direction for the Halloween franchise that would concentrate on a different source of evil with each new entry, Carpenter, who was already discussing the project with Joe Dante, enlisted Kneale to pen a script. Although most of Kneale’s initial draft ended up on the screen, some of the author’s views, particularly a virulent streak of anti-Irish racism, prevented his draft from being produced. Before long, Carpenter hired Tommy Lee Wallace, part of the editing and production team on Halloween and Carpenter’s The Fog (1980), to rewrite Kneale’s script and direct. Even so, Kneale’s basic concept for Halloween III remains intact.

The complicated plot of Halloween III: Season of the Witch cannot be easily summarized and should not be examined too closely; quite frankly, it won’t hold up under scrutiny. Not much about the story makes sense in terms of logic. But it’s a spooky tale with memorable imagery and a shocking setup, and it’s disturbing even after several decades of horror desensitization. A week before Halloween night, Dr. Challis (Tom Atkins), a hospital physician and divorced father of two, admits a frightened, paranoid patient. After having a breakdown at a country gas station, Harry Grimbridge (Al Berry), a toy shop owner, arrives in the hospital in a shaken state, yowling about how “They’re going to kill everyone!” Unsettled, Challis gives the patient a sedative and, later, realizes that Grimbridge may have been onto something when a mysteriously tranquil man in a business suit enters the hospital, crushes Grimbridge’s skull, and then sets himself on fire in the parking lot. Shaken by what he’s seen, Challis goes into detective mode and, teaming with Grimbridge’s twentysomething daughter, Ellie (Stacey Nelkin), investigates.

Their only clue is a Halloween mask that Grimbridge was clutching before his death. Manufactured by the Silver Shamrock Novelties Factory, headquartered in the nearby Santa Mira, California (the same fictional town from Don Siegel’s 1956 version of Invasion of the Body Snatchers), the masks are part of an elaborate plot conceived by the company’s pointedly Irish founder, Conal Cochran (Dan O’Herlihy). By embedding a computer chip and a small piece of a stolen monolith from Stonehenge into every Silver Shamrock mask, Cochran, practicing a form of modern witchcraft, schemes to kill all children wearing one of his popular masks on Halloween night. When his company sends a deadly signal out during a 9:00 p.m. television broadcast, the result will melt the head of any child wearing a mask, turning them into a goopy stew of insects and snakes. And as Challis and Ellie explore Santa Mira, a town virtually owned by Cochran, complete with security cameras and monitoring devices to spy on outsiders, they discover that Cochran has advanced from toys to robots. Most Silver Shamrock employees seem to be convincing simulacra fueled by an orange substance like pumpkin juice, and they carry out Cochran’s nefarious orders to the letter.

There’s an undeniable cult appeal to Halloween III: Season of the Witch that defies traditional criticism with its transgressions and ironic humor. For example, Wallace breaks the horror movie rule that declares no small child will die onscreen when Cochran tests one of his masks on a young boy, resulting in a slimy mess of creepy crawlies. Then again, to give credit where it’s due, Carpenter had broken that rule early in his career with the murder of a pigtailed girl in Assault on Precinct 13 (1976). Or take the mustachioed Atkins—then in his forties, with pocky skin and an ever-unbuttoned collar—who’s put forth as a ladies’ man. Atkins is an unlikely sex symbol, to be sure, and yet a series of horror films have used him as a grizzled sexpot, including Carpenter’s The Fog (he and hitchhiker Jamie Lee Curtis jump into bed before exchanging names). His Challis kisses a female medical investigator friend on the mouth, grabs a nurse by her bottom, and invites a nurse to join him on the hospital office couch for a “nap,” thus violating every sexual harassment policy ever. Later, Ellie, a young and beautiful woman, can’t resist bedding Challis, a man her father’s age, mere minutes after they check into a Santa Mira motel under false names.

Elsewhere, the plot leaves questions abound. For instance, why are so many children gonzo for these rather generic masks in the form of a skeleton, a witch, and a pumpkin? Is the whole town of Santa Mira aware of Cochran’s plan to kill children, and if so, why are they on board with it? Is the entire town populated by witches, or are they all robots of Cochran’s creation? And besides being an Irish witch (or warlock), why does the naturalized American, albeit Irish Cochran want to kill most of the children in the country? In a later scene, after he’s captured Challis, Cochran relays his evil plot in true James Bond villain style—in a cheap-looking lab, surrounded by lab-coated goons, of course—explaining that the last great Halloween “took place three thousand years ago, when the hills ran red with the blood of animals and children.” He wants another great Halloween, but to what end? Moreover, what if children are trick-or-treating instead of watching the Silver Shamrock broadcast? What then? And why does Cochran think no one will put together that it was the Silver Shamrock masks that killed millions of children?

The story doesn’t make much sense in terms of motivations, whether you question Cochran’s intentions or why Ellie would ever decide to sleep with Dr. Challis. Regardless, Halloween III: Season of the Witch has an eerie quality that works on the viewer from scene to scene. Sometimes, it’s the aural stingers and visual jump-scares that cannot help but jolt us at the right moment. Other times, it’s the gory practical makeup that genuinely disturbs, such as a sequence when a toy shop owner from San Francisco meddles with the Silver Shamrock computer chip on a mask, and it “misfires” in her face, leaving a horrid, grotesque wound on her mouth, and her eyes bulging out. There’s also the haunting finale, where Challis realizes that Cochran has replaced Ellie with one of his robots. After struggling with her, he races to a nearby gas station, mirroring the opening scene with Grimbridge at the gas station. Challis is just in time to call the local television station to warn them about Cochran’s broadcast, and they remove it from most channels. The final, chilling scene shows Cochran’s signal going out on a single station, likely killing millions of children, as Challis shouts for them to “Stop it! Stop it! Stop it!”

Tommy Lee Wallace, who would go on to direct Fright Night 2 (1988) and the 1990 miniseries It, has most of Carpenter’s technical crew from the previous two Halloween movies to support him on Season of the Witch. Dean Cundey’s dark, lens-flaring cinematography offers an exceptional use of the widescreen frame, such as a beautiful nighttime shot of trick-or-treater silhouettes marching against a setting sun. Wallace and Cundey employ long tracking shots filmed from a distance, a touch usually associated with Carpenter. And even though Wallace accomplishes what is ultimately a solid impersonation of Carpenter’s look and feel, few critics responded with anything positive to say. Most critics understandably dismissed the movie for its nonsensical plot, which Roger Ebert described as “half-baked,” calling it “assembled out of familiar parts from other, better movies.” Despite making a small profit at the box-office, the sequel didn’t make as much as Halloween or Halloween II, which meant the franchise would return to Michael Myers—although not with Carpenter involved.

Following the commercial failure of Halloween III: Season of the Witch, Carpenter lost interest in the Halloween franchise. While the prospect of an ongoing movie series that would allow different filmmakers to explore unique horror concepts, each set on October 31, intrigued him, audiences wanted the return of Michael Myers. Carpenter wasn’t interested, and he resolved to sell the rights to the Halloween franchise to a fellow producer. Moustapha Akkad took over the series and released Halloween 4: The Return of Michael Myers in 1988, followed by several increasingly bad sequels that betray the integrity and formal composure of their predecessors. But like a memorable episode of The Twilight Zone or The Outer Limits, this second sequel to Halloween serves as a stand-alone project that has a singular, gleefully malevolent quality that may not always make logical sense, but it carries a spooky mood and cultish humor that have aged well. If nothing else, the movie’s repetitive, relentless, electronic Silver Shamrock jingle is bound to incept its way into your mind every Halloween season.