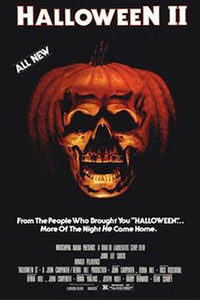 Everyone involved in Halloween II was convinced they were essentially making another version of Halloween. “Sequels mean the same film,” said John Carpenter, and the follow-up to his 1978 hit would be “just the same.” Even the promotional department took the original’s tagline (“The night he came home”) and made a dull variation: “More of the night he came home.” But the first of many sequels to Carpenter’s original was different in banal ways, resembling less its predecessor than the bloody slasher movies that had exploded onto the market after Halloween’s record-breaking debut. Friday the 13th (1980), Friday the 13th Part 2 (1981), Mother’s Day (1980), My Bloody Valentine (1981), and countless others quickly established a new set of expectations for an audience that was now hungry for elaborate kills and gory special FX. Such graphic displays were decidedly absent from the original, perhaps out of budgetary necessity, perhaps out of Carpenter’s concentration on manufacturing suspense over pure shocks. But Halloween II resolved to be just another prosaic slasher movie.

The sequel was made by most of the same people who made the original, but curiously, it turned out to be quite dissimilar. Irwin Yablans, Joseph Wolf, and Moustafa Akkad produced alongside Carpenter and Debra Hill. Rick Rosenthal took over directing duties and, working alongside the original’s cinematographer Dean Cundey, approximated the look and feel of the first movie. Cundey’s expert use of widescreen blocking and lens flares established a comparable visual sense between the first and second movies, although there isn’t an overall philosophy behind the camerawork—such as how Carpenter tightened characters in the frame as the original progressed, evoking an emergent sense of claustrophobia. The screenplay was written by Carpenter and Debra Hill, who penned the first movie. And despite Carpenter’s claim that they sought to give audiences what they expected after the first one, they instead supplied a cheap and gristly horror show far removed from the original’s restraint. They made a gorefest rather than a suspenser.

Halloween II opens, as the tagline suggests, on the same night as Halloween. Recapping the last moments of the original, the first scenes follow Dr. Loomis (Donald Pleasence) as he shoots Michael Myers out of a window. Loomis rushes down to the main level, where he finds nothing but the perfect silhouette of Michael’s body imprinted on the lawn—like a cartoon character who has crashed through a wall. A neighbor appears and complains about the gunfire, that he’s been “trick-or-treated to death” tonight. Loomis replies, quite crazily, “You don’t know what death is!” Loomis, more obsessed than ever, leads a frantic search to locate Michael in the sleepy neighborhood of Haddonfield, Illinois. His eagerness launches into the chase of a young man who’s dressed vaguely like Michael, followed by a fiery car accident that results in the death of the supposed killer. Loomis isn’t convinced it was Michael who died, and rightfully so, though no tears are shed over the dead trick-or-treater. Sheriff Brackett (Charles Cyphers) is too concerned with the death of his daughter, whom Michael strangled in the first movie.

Meanwhile, much of Halloween II takes place in the local hospital, where Laurie (Jamie Lee Curtis) recovers from her wounds. A paramedic named Jimmy (Lance Guest) lingers around Laurie, while another paramedic named Budd (Leo Rossi) tries to coordinate some workplace lovemaking with Nurse Karen (Pamela Susan Shoop). The tedious interactions of the various hospital staffers slow the movie to a crawl. Worse, each supporting character is introduced just as quickly as Michael disposes of them, supplying the filmmakers with body count fodder. At the same time, the story reveals that Laurie is actually Michael’s sister, born and given up for adoption after Michael was committed. Not only does this wrinkle serve no dramatic purpose or heighten the tension, but it doesn’t make sense. Michael could not have known this about Laurie, or at least the movie never established when he learned about this familial connection.

Rosenthal’s direction lacks the voyeur element of Carpenter’s original. Instead of showing the audience where Michael is in relation to his future victims by using, say, a subjective camera angle, Rosenthal decides to use the killer as a human jump-scare. Michael pops into the frame more than once, announced by a sharp jolt on Carpenter’s even more synth-sounding electronic score, and viciously disposes of his victims. And as suggested, the deaths in Halloween II are bloody and grotesque. Michael stabs not one, but two victims with a syringe; he uses the sharp end of a hammer to cave-in a security guard’s skull; he drowns a topless nurse in a scalding hot hydrotherapy tub, her skin left peeling from her face; he drains the blood from a nurse with an open IV line; and he slices up a few victims with a scalpel. None of these deaths are particularly scary. Rather, they’re shot in such a way that the 1980s horror viewer should celebrate the extremity and sensationalism of Michael’s killing—an element of so-called fun that betrays the suspenseful integrity of the 1978 movie.

Made on the cheap for $2.5 million, Halloween II followed the time-honored pattern of a sequel’s diminishing returns, but it nonetheless made a healthy profit. And while the movie proves superior to most other sequels in the franchise, that’s not saying much. Today, there’s a single moment that haunts the viewer, and it’s a detail that appears almost in passing. As paramedics wheel Laurie into the hospital, Rosenthal’s camera stops on a mother who carefully escorts her trick-or-treater child inside. The boy, costumed like a pirate, holds his mouth, bloodied from the razor blade that some suburban homeowner hid in their candy for an unsuspecting child—and it’s now lodged in the boy’s gums, looking horrifically painful. This single image reflects how Carpenter and Hill originally wanted to explore Halloween mythology with the franchise, from presenting Michael Myers as a modern personification of the Boogeyman myth, to the urban legend of checking candy for razors. It’s a fascinating and underexplored theme that Carpenter and Hill would experiment with on Halloween III: Season of the Witch. But as Halloween II suggests, the series would eventually bend to the demands of an audience that craves conventional slasher thrills.