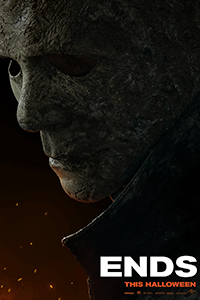 If there’s anything that distinguishes David Gordon Green’s take on the Halloween franchise—besides his amplified brutality and sometimes questionable alterations to the Michael Myers mythology—it’s the director’s heavy-handed metaphors. Take the opening title sequence of Halloween Ends, the third and final entry in Green’s trilogy for Blumhouse. In the usual motif of titles and a jack-o’-lantern over a black screen, we see a variation where jack-o’-lanterns burst out of other jack-o’-lanterns, suggesting, in Halloween symbolism, that evil begets evil. Sure enough, this sequel to Halloween (2018) and Halloween Kills (2021) is less about Michael Myers than another breed of evil altogether—a flourish that feels somewhat inspired by the Michael-less departure of another part three, Halloween III: Season of the Witch (1982). Accordingly, the screenplay by Green and three other credited writers (Danny McBride, Chris Bernier, and Paul Brad Logan) is loaded with dialogue about the nature of evil, tarot cards that promise “a major phase is ending and a new one is beginning,” and other such nonsense—all unsubtle and over-explained in defiance of subtext. And yet, even though Green has plenty of surprises in store, Halloween Ends doesn’t commit to its digression, leaving both the new evil and the old one underserviced.

Although the Halloween franchise as a whole feels incohesive and clunky, I admire Ends for taking a few unconventional swings at our expectations, just as I enjoy Season of the Witch. In particular, much of the new movie follows Corey (Rohan Campbell), who, as a teen babysitter on Halloween night in 2019, faces a life-altering tragedy that ultimately leads to him becoming a copycat killer. It’s a year after the events in Kills, and Michael Myers remains on the loose. Regardless, Corey agrees to a last-minute babysitting gig. Tormented by the little hellion throughout the night, Corey overreacts, and just as the kid’s parents arrive home, they witness their son’s accidental death. It’s a shocking moment that I suspect traumatized much of the audience in my screening, not to mention Corey. Four years later, Corey has become the new boogeyman of Haddonfield, Illinois, despite being cleared of any wrongdoing. With a cloud over him, he’s stuck working at a junkyard and targeted by teen bullies straight out of a Stephen King story. When they see Corey and Laurie Strode (Jamie Lee Curtis) together, they call them “a psycho and a freakshow.” And at first, their shared outsiderdom endears Corey to Laurie. 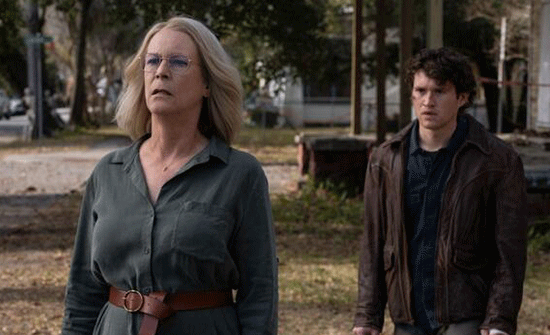 In the four years since we last saw Laurie, who spent most of Kills in a hospital bed, she has somehow gotten over Michael Myers. Given how Green and McBride’s 2018 movie reframed Laurie as an obsessed militant whose entire life has been defined by Michael Myers, it’s odd that she has now relocated to a quiet home with her granddaughter, Allyson (Andi Matichak), where she writes a memoir and tries to become Betty Crocker. She even has a cute flirtation with the retired Officer Hawkins (Will Patton), suggesting some domestic bliss in her future, assuming she survives. This is all very strange. Even though we’re told the babysitter murders she survived in 1978 scarred her so severely that she spent the next 40 years drinking and preparing for a showdown, convinced Michael Myers would return; even though her worst fears were confirmed when he did return in 2018, adding many more to his body count; and even though Michael killed her daughter (Judy Greer) and then escaped without a trace, likely to return, we’re meant to believe that Laurie has somehow overcome her justifiable paranoia that has defined her for nearly her entire life. The precise reasons for this are never adequately explained, save for Laurie’s haircut that transitions her from the “crazy compound lady” style to the middle-aged suburbanite look. Even if she’s lying to herself, her behavior seems uncharacteristic for this version of Laurie.

In any case, Laurie begins to suspect something is wrong with Corey after seeing something in his eyes. But by then, she has already introduced him to Allyson, hoping to arrange a love connection. What’s more, Allyson latches on to Corey all too quickly, identifying with his experiences as the town pariah given her family history of getting blamed for Michael Myers’ return. Maybe it’s the persistent bullying, the harassment from townsfolk, or his vaguely psychosexual relationship with his abrasive mother, but Corey’s disturbed mental state soon emerges as a pattern. Outbursts and uncomfortable moments compile, yet Allyson seems oblivious to them, even agreeing to help him “burn it all to the ground” in a vague threat to no one in particular. Meanwhile, Corey stumbles upon Michael Myers hiding in the sewer, and—based on the fact that Corey doesn’t get stabbed to death—he’s rather accepting of Corey’s presence. Michael recognizes the same thing in Corey’s eyes that Laurie sees in Michael’s: evil. Soon enough, Corey takes lessons from Michael, but, alas, there is no Rocky-worthy knife-work training montage between them, just a scene where they partner up to slaughter a few characters who have slighted Corey in the past.

While Ends proves more character-driven than the chaotic crowds of townsfolk in Kills, it’s weighed down by dialogue that attempts to establish the story’s grandiose and generally confused implications about good and evil. Specifically, the central question about Corey is whether he is innately evil or if an external force has invaded him. Did meeting Michael transfer evil into him, or did the town turn Corey into a new boogeyman? Or maybe he was always capable of violence? An ugly wound on Corey’s hand symbolizes that, whatever its source, evil has infected Corey. For all of the mythologizing of Michael and talk that “evil dies tonight” in the previous movie, there’s a surprising concession in Ends, suggesting that people are responsible for their actions when Laurie says Michael is “just a man.” Then again, her assertion that “evil doesn’t die; it changes shape” and a late explanation (added with obvious ADR) that Corey was “consumed by evil” don’t make the debate between internal and external evil any clearer. Both can be true, I suppose. But for all of the movie’s open discussion about evil, it remains curiously unresolved and not all that compelling. 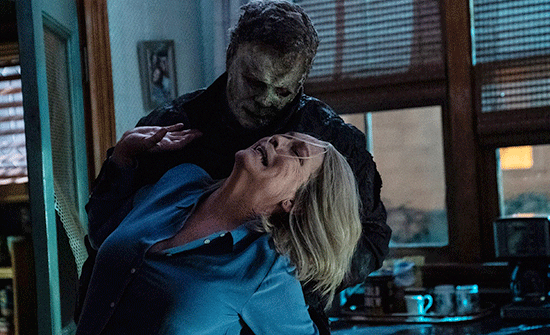 More intriguing is how Ends has a story structure that doesn’t quite work as a Halloween movie but sort of works as a serial killer origin story. Cut out the final fifteen Michael-centric minutes and any scenes involving him early on, change the title to Corey the Killer or something better than I can come up with, and you have a pretty smart, compelling slasher. However, as a Halloween movie—and more specifically, a sequel to Kills—Ends has an underwhelming and disjointed narrative trajectory. Green reserves only the finale for a face-off between Laurie and Michael that is, at the very least, memorably final. There’s no chance that Michael might have survived for a fourth go-round with Green at the helm. He’s quite certainly dead. Still, given that most of Ends revolves around Corey, while Michael remains in the sewers, offering occasional instruction to his new disciple in silly scenes, it’s fair to feel let down by the lack of the film’s central villain. It’s certainly a departure, which isn’t an inherently bad thing. But I would have respected Ends more had the filmmakers ditched Michael entirely and focused the story on his copycat.

Of course, Green is a skilled filmmaker whose command of the craft is evident throughout. Ends is arguably the most cohesive and visually assured of the director’s three franchise entries, if overly reliant on homage. His only significant missteps are the lazy sizzle reels of past Michael Myers killings and montage recaps of information from earlier movies. But elsewhere, his choices are inspired, such as when he evokes both Wong Kar-wai’s Fallen Angels (1995) and David Lynch’s Lost Highway (1997) during a motorcycle sequence involving Corey and Allyson. Ends also boasts a few memorable kills, including a scene in which Michael cuts off a DJ’s (Keraun Harris) tongue onto a spinning record. The final confrontation in Laurie’s dark house is also thrilling, complete with references to previous films, from the original Halloween to the garbage disposal fakeout from Halloween H20: 20 Years Later (1998). But in the last section, the movie altogether forgets about Corey, which makes everything that happened before feel inconsequential.

Both in plotting and character definition, Ends is an odd coda to its two immediate predecessors. It makes some bold moves, but it never quite convinces us that it’s a whole Halloween movie, even though there’s a solid 90-minute slasher in this 111 minutes of footage. As for Michael Myers, viewers shouldn’t take the Ends part of the title too seriously. This isn’t the first time—nor will it be the last—that a Halloween movie has portrayed the death of Michael Myers. Although John Carpenter’s original film famously concluded with the boogeyman seemingly evaporating into the night, Halloween II (1981) featured the killer’s death, and so did various other sequels. But he keeps returning, either due to some screenwriter’s half-baked idea or because whoever owns the franchise rights at the moment decided to start afresh—and Halloween has changed hands many times, from the various distributors of the original eight movies to Rob Zombie’s two offshoots and now the Blumhouse trilogy. So no matter how Ends may leave things, you can bet Michael Myers will be resurrected, rebooted, or retconned again in some form or another.