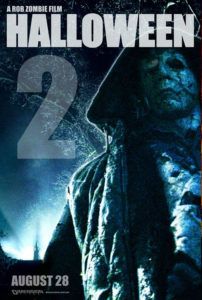 Rob Zombie makes movies about white-trash hillbillies chopping up other white-trash hillbillies as part of his ongoing homage to gritty, southern-fried horror of the 1970s, notably The Texas Chainsaw Massacre. His trailer park aesthetic thoroughly steals from that of the more natural, raw style of Tobe Hooper. Accordingly, Zombie’s movies feature no redeemable characters, gruesome violence takes precedence over character development, and the product usually leaves the viewer feeling detached and unsettled. Every effort bearing his name thus far fits this description, including Halloween 2, the sequel to Zombie’s despised 2007 remake of John Carpenter’s 1979 classic.

Just as the 1981 sequel was a pointless follow-up to Carpenter’s original, Zombie’s second go-round adds nothing to the experience that came before it. Like the original sequel, Halloween II by Rick Rosenthal, some scenes take place in a hospital, and Laurie Strode, here played by Scout Taylor-Compton, realizes that she’s Michael Myers’ sister. But that’s where the comparisons end. Once again, Zombie has revamped the story to make it his own, so it goes without saying that he flashes both gore and gratuitous nudity about the screen. And plenty of swearing, too, enough to make you never want to hear another expletive in your lifetime. He seems to have a preoccupation with “fuck” that never tires, so even if you have the foulest of mouth (as this critic tends to), Zombie’s pervasive use of the word is grating on the ears.

Zombie’s revision of the original setup involves eliminating any mystery whatsoever as to what drives Michael Myers, the masked, knife-wielding brute played here by pro-wrestler Tyler Mane. His previous Halloween told of Michael’s early life in detail, including a laughably bad moment where the song “Love Hurts” punctuated a crucial moment in the adolescent killer’s inner rage. Here, Zombie reveals what keeps the killer killing, as the director has a penchant for over-analyzing serial killers through shoddy, Psychology 101 terms. In a laughable turn, the ghost of his mother (Sheri Moon Zombie), accompanied by a White Horse, tells Michael to kill and bring the family together again. Several moments involve Mama Myers telling Michael to kill this or that person, guiding him around and offering up some silly in-the-mind-of-the-killer sequences in the process.

The sequel begins a year after its predecessor. The confusing mise-en-scène isn’t quite sure if the setting is today or sometime in the 1970s: the TVs play vintage broadcasts, the radio blares Alice Cooper, but there are computers and modern cars in the background. Regardless, Laurie now lives a rock-n-roll lifestyle with her friend and fellow Myers victim Annie (Danielle Harris), in the home of Annie’s father, Sheriff Lee Brackett (Brad Dourif). Meanwhile, Michael wanders about, sporting a thick beard and killing the occasional dog for a fresh meatsnack. Both Laurie and Michael have the same haunting dreams about Sheri Moon Zombie in a white gown, so it comes as no surprise when the new book by psychologist-turned-diva Dr. Loomis (Malcolm McDowell) reveals that they’re brother and sister. By the time Laurie discovers this, Michael’s back, and the body count has already reached the mid-teens.

You won’t really mind when the bodies start to pile up because Zombie has done such an exceedingly wonderful job of making his characters despicable people. Even Laurie has become a reckless party girl who’s nothing more than a walking cliché, and by the Psycho rip-off finale, you’ll care even less about her fate. Save for some inspired casting—Margot Kidder plays a shrink; Chris Hardwick and ‘Weird Al’ Yankovic have an admittedly chuckle-worthy cameo together—the movie inspires nothing more than grinding teeth.

Somehow, Zombie has convinced die-hard horror enthusiasts that he’s a genius. It’s a baffling phenomenon, to be sure. His fanbase doesn’t seem to mind that he’s incapable of writing redeemable characters or a single scenario not involving serial killers. Fans are just enthralled by the undeniable graphic energy of his films, even if each new picture plays out like The Manson Family Christmas. What’s most frustrating about his approach is that it’s economically successful, because he shoots on such low budgets. Enough curious suckers see his movies on opening weekend to make them profitable. And despite most of the audience leaving disappointed or irritated, his films keep earning, so studios keep hiring him. And so, Halloween 2 wasn’t screened for critics (I made the mistake of paying for an afternoon matinee on opening day). This is usually a surefire sign that the response won’t be good, making it so that audiences can’t know in advance what a crapshoot this movie is until after it’s over. There’s no bad word-of-mouth to spread until after the opening weekend, and by that time, Zombie’s already made his budget back, thus securing his next project. So here’s hoping you’ve read this review early enough to prevent you from wasting your time. If not, you’re just another sucker supporting Zombie’s turgid career.