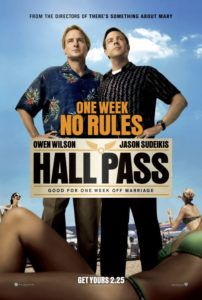 Hall Pass, the latest comedy from Peter and Bobby Farrelly, progenitors of gross-out material like Kingpin and There’s Something About Mary, attempts to instill their usual formula with post-Judd Apatow sentimentality. Instead of achieving Apatow’s clever mix of bawdy humor and heart, however, the Farrelly’s deliver another disgusting and unfunny movie, one so filled with unchecked gender clichés, persistent demeaning comments about women, and homophobia that the result proves offensive. While recalling all the sordid, and certainly forced, sex dialogue, I remember chuckling once or twice, and those rare moments are the only thing saving this title from a zero-star review.

Owen Wilson and Jason Sudeikis, both sporting straight-arrow haircuts that make them look like pedophiles, play the restless husbands of Jenna Fischer and Christina Applegate. Busy-eyed, sex-obsessed characters, these men constantly speak of their high school glory days of free-wheeling perversion and remain incapable of limiting their glances at other women to anything under an open-mouthed stare. To end their wandering eyes, the wives’ friend (Joy Behar, proving she’s no actress) suggests they offer their husbands a “hall pass”, which entitles them to a week off marriage and guilt-free access to cheat. Pretending to not want the opportunity, the men eventually jump at the chance, but then spend their week realizing how unskilled they are at picking up loose women. Wasting one night at Applebee’s, another golfing on pot brownies, and another drunk at a bar, the men squander their time while (and here’s the big Twist) their wives succeed at picking up loose men at a beachside family getaway. That is, until Fischer’s character realizes, “This hall pass wasn’t for him. [Dramatic pause.] It was for me.”

Of course, an audience exists for this type of movie. And if its brand of humor is your thing, there’s plenty for you to look forward to: nonstop dialogue reducing genitalia to ugly slang terms; two shots of penises of varied sizes; one boob shot; poop sprayed on a bathroom wall… and so on. All of this usually wouldn’t be so bad, as plenty of Apatow movies include much worse; but they also contain three-dimensional characters to make up for it. The worst part is not the actual images or crude references, but the context, and the surrounding, endless, unbecoming tone that renders women’s bodies as objects. When the protagonists arrive in a public park to observe a “buffet of ass” or gawk without reservation at every passing female, it’s hard to call these men, or the movie they inhabit, likable. In particular, Sudeikis overacts in every scene in his obvious Will Ferrell-type role, and his harsh performance and unrelenting sex-infused banter are jarring, whereas Wilson feels bland and invisible in comparison.

When it comes to the production values, if you’ve ever seen a Farrelly Bros. movie, you know not to expect much by way of first-class filmmaking. But Hall Pass lowers the bar to distracting extremes. Consider something simple as the skin tones, specifically the tans, present onscreen—some are intentionally over-the-top, while others are meant to look natural yet do not. In the former category is Farrelly regular Rob Moran, who, along with his character’s elitist freakshow family, sports that rotting orange look. In one of the movie’s few funny scenes, several characters mock them behind their back but are caught on camera. Bad tans being an established joke, why would the Farrellys introduce Fischer and Applegate’s patchy skin later on at their getaway? Either (A) this was an intentional joke never once underlined (and it’s impossible to believe a Farrelly Bros. joke wouldn’t be over-emphasized), or (B) the production’s makeup department was subpar. My vote is for Option B.

Sophomoric and predictable in ways normally associated with a sitcom, Hall Pass not only tests an audience’s tolerance of gross-out humor, but it’s an utter bore too. The runtime feels like three hours, probably because the Farrellys stretch out a simple premise for about an hour and twenty minutes too long, dragging out the clichéd ideas that make up the script (which, by the way, took four credited and a number of uncredited scribes to complete). Through it all, the Farrellys try to incorporate some heart into their disgusting, mean-spirited little movie, but any redeemable values are obliterated by push-the-envelope sex humor. When they should’ve been either totally reinventing themselves for modern audiences or sticking to their same old tricks, the Farrelly brothers make a half-hearted attempt at something new (for them) and achieve only this pathetic waste of film stock.