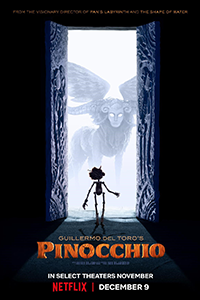 Guillermo del Toro puts his stamp on Carlo Collodi’s The Adventures of Pinocchio from 1883 with a gorgeous new stop-motion animated feature for Netflix. Putting his name in the title, Guillermo del Toro’s Pinocchio, the director carves out a unique take on the thoroughly explored tale. But Del Toro must compete with the likes of Walt Disney, whose 1940 classic solidified its iconography in our collective consciousness. Every subsequent adaptation of Collodi’s story—and there are a lot of them—has failed to dethrone the visual authority of Disney’s images, including versions by Roberto Benigni and Matteo Garone. That also includes the abortive Robert Zemeckis reimagining from earlier this year, which pathetically recreated scenes from Disney’s original in live-action (i.e. mostly CGI), complete with Tom Hanks as Geppetto and photorealistic talking animals. Against so many earlier versions, del Toro faces an uphill battle, not only to make his adaptation stand apart from the rest but make the worn-out material feel vibrant again. Thanks to del Toro’s distinct visuality and the animation overseen by co-director Mark Gustafson, the film is at least successful in the former category; however, his take never quite revitalizes the dusty material.