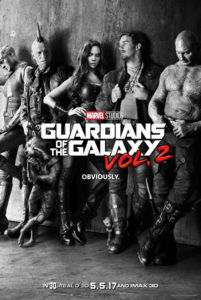 James Gunn carved out his own niche in the Marvel Cinematic Universe with his 2014 surprise, Guardians of the Galaxy. The former schlock director (see Slither now) delivered a superhero film with a familiar space opera scenario reminiscent of Star Wars, except with offbeat humor, a hearty sense of seventies and eighties nostalgia, and a playfully sarcastic cast copied straight from the Millenium Falcon crew. The result felt innovative in the context of the greater MCU, its characters more cartoonish and tongue-in-cheek than typical comic book material. Championed as the voice of the original, Gunn returns as sole writer-director (a rarity for Marvel Entertainment productions) of Guardians of the Galaxy Vol. 2, an arcade-game-of-a-sequel that makes up for what it lacks in originality with wackier jokes, darker themes, a kaleidoscopic color palette, and a plot lovingly saturated with interpersonal conflicts between the motley crew of characters—notably, the film’s overarching daddy issues bear unquestionable resemblance to The Empire Strikes Back.

Chris Pratt returns as Peter Quill, aka Star-Lord, a charming hero and overgrown child with an affinity for dated pop-culture. Save for the Walkman and troubled parentage, he’s basically a clone of Indiana Jones and Han Solo (or perhaps Jack Burton is a more appropriate comparison). Not much has happened to Quill’s crew since the original, besides becoming heroes for hire. In the hilariously juxtaposed title sequence, a miniature version of the tree-thing Groot (voice of Vin Diesel), still growing after his sacrifice in the first film, performs a blithe dance to ELO’s “Mr. Blue Sky” as his teammates fight against an interdimensional creature. In case you’ve forgotten (you haven’t), the Guardians also consist of Zoe Saldana’s green-skinned killer Gomora, Dave Bautista’s metaphor-deficient brute Drax, and Bradley Cooper’s voice as the self-hating and sarcastic raccoon named Rocket. After another successful mission, they collect their payment from a genetically enhanced race called the Sovereign—led by the gilded Ayesha (Elizabeth Debicki)—in the form of Gomora’s estranged sister Nebula (Karen Gillian), but they soon find themselves chased by their employers.

On the run, they find safety with Quill’s long-lost father, Ego, a literal living planet and godly celestial who takes humanoid form in the appearance of Kurt Russell. By now, we’ve already spied a digitally youthified version of Russell in the film’s early 1980s-set prologue, where Ego and Quill’s mother savor a shaggy romance to Looking Glass’ “Brandy (You’re a Fine Girl)”—a song whose lyrics have some importance later, oddly enough. With his empathic, antennaed helper Mantis (Pom Klementieff) meekly trailing behind, Ego gives Quill a tour of himself, reminding his son that he too has celestial genes and elevated status in the universe. Meanwhile, Gunn spends a lot of screentime establishing subplots, each of which have a surprising emotional consequence by the finale: Drax finds Mantis hideous and tells her so. Blue-skinned Ravager and anti-hero among anti-heroes, Yondu (Michael Rooker), captures Rocket and Baby Groot on a bounty from the Sovereign, while also trying to regain his credibility with Ravager leader, Stakar (Sylvester Stallone). And though Nebula is on the warpath to kill her sister and father (Thanos, unseen here), Gomora tries to patch their sisterhood. 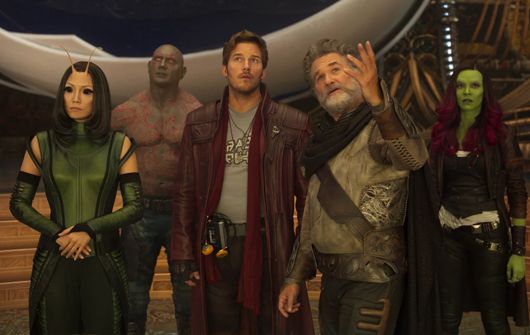 Whereas the original felt somewhat unbalanced by an uninteresting villain and third act conflict (an ongoing issue with Marvel titles), Vol. 2 corrects that error but replaces it with other, quibble-worthy aspects. Consider Gunn’s even more prevalent use of pop-culture references this time around. In a running gag, Quill tries to compare the”unspoken” thing between him and Gomora to Sam and Diane on Cheers—a hilarious reference. Less funny is how Quill confesses he used to tell his classmates on Earth that David Hasselhoff was his father, leading to an unnecessary cameo by the Knight Rider star. Elsewhere, the over-emphasis on establishing material for future sequels leaves several characters feeling incomplete or superfluous, while the CGI-riddled denouement plays out like a videogame on speed, with rocks and tendrils aplenty zipping about the screen in manic fashion. None of these minor complaints matter much in the grand scheme, especially because they feel genuinely offbeat and drawn from Gunn’s bizarro perspective. However, they prevent the sequel from surpassing the original or transcending the limitations of the MCU.

Guardians of the Galaxy Vol. 2 may be loud and actionized summer fare, but it entertains by finding an equilibrium between diversionary thrills and emotional substance. Amid the dozen-or-so alien skin colors and ridiculously high body count, Gunn’s effervescent visuals, persistent oddball humor, and momentum throughout feel secondary to the character drama and emerging themes of family, which seem genuinely felt instead of applied for superficial reasons (take that, Fast/Furious series). Russell makes an excellent villain—perhaps that’s a spoiler, but he’s a god named Ego, so you should’ve put that together already—and the actor’s unending charm makes his broken relationship with Quill feel tragic. Most surprising are the heartstrings pulled by various subplots, leading to a final scene that allows the viewer to saturate in a feeling of melancholy and loss, which is quickly shed by the five scenes after The End. To be sure, Vol. 2 never takes itself too seriously yet it contains plenty of heart. Gunn’s ambitious script comes together in a rousing way, reminding fans why the Guardians of the Galaxy remain the crowning jewels of the MCU.