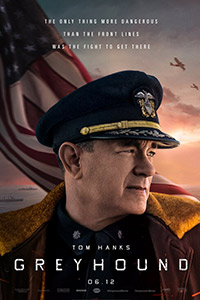 The most human moment in Greyhound, about a convoy of naval warships headed through the North Atlantic, crossing a span of ocean teeming with German U-boats, arrives with a sneeze. An American sailor in charge of relaying sonar information to Tom Hanks’ Commander Ernest Krause asks to have a report repeated because he caught a sniffle the first time. It might be the only break in the film’s daunting, tiresome devotion to naval spectacle and process. Based on C. S. Forester’s 1955 novel The Good Shepherd, the film marks Hanks’ latest World War II project, after starring in Saving Private Ryan (1997) and executive producing both HBO’s Band of Brothers (2001) and The Pacific (2010). Hanks’ company, Playtone, produced, while he adapted the material with a surprising bluntness and deficient humanity, his screenplay concerned more with naval strategy and a sense of immersion in what might’ve been a breathless battle at sea. Except, director Aaron Schneider, last seen directing 2009’s Get Low, turns Hanks’ script into a hollow object of digital dramatic reenactment.

Set in February 1942, Greyhound follows the titular ship that leads a convoy of a few dozen ships through the “Black Pitt”—a stretch of the Atlantic too far out to receive air cover, making them easier prey for German U-boats. Krause, a religious man first seen praying for his freshman command, has God on his side, evidenced by the sunlight from a porthole shining down on him with obvious import. Nevermind his backstory. The film drops hints at his noble character during the action, which picks up within the first minutes of the brief 91-minute runtime, forcing him into a cat-and-mouse hunt over the next two days. Everything one needs to know is summed up thusly: he’s the kind of commander who doesn’t care about gathering evidence to make his ship’s first kill official; it’s enough that he knows the other ship no longer presents a danger to his mission and crew. Though he makes occasional mistakes that demonstrate his newness to the watchful bridge crew, such as forgetting a sailor’s name and overlooking the proper procedures, he dutifully carries out the mission.

However noble and stoic Krause may be, his discipline doesn’t leave much for the viewer to cling to, other than Hanks’ affable screen presence. To be sure, the story feels like the last two-thirds of a larger film, in which characters have been better established and can be forgiven for their lack of expression during the action. The dialogue, composed mostly of orders, and the confirmation of those orders, allow few glimpses at the sailors’ interior lives, only callouts ranging from “contact inside minimum sonar range” and “hard right rudder” fill the air. Our sense of Krause’s inner self belongs to an early flashback just days after the attack on Pearl Harbor, where he exchanges Christmas presents with his sweetheart (Elisabeth Shue). She won’t marry him until the world returns to normal. Getting back to his best gal remains his motivation, and later, she’s glimpsed in brief mental images when the battle ebbs. Along with bookend scenes of Krause praying, there’s little else to this character.

Not an actor’s showcase nor a work of great drama, the script supplies no memorable characters. In the supporting cast, Stephen Graham plays an executive officer, though he doesn’t have much to do. Rob Morgan appears as George Cleveland, one of the African American messmates, whose big moment comes when he fixes Krause an egg sandwich. Alas, Krause never allows himself the indulgence, and (spoiler) the sandwich ends up in a soggy puddle on the floor. The villains, too, remain one-note demons heard on the other end of a radio. Their frightening radio messages taunt with threats like “we hunt you” and “we can always find you in the night to kill you.” Through it all, Krause doesn’t sleep; he ingests coffee. Editors Mark Czyzewski and Sidney Wolinsky keep the tempo high, whereas Blake Neely’s curious score sounds like extended whale vocalizations.

Given the extent to which Hanks’ script captures the experience of being on a battleship in oppressive detail, Schneider does not present a visual showcase to match. Greyhound is a digital confection whose naval battles and scenery consist of CGI bested by Call of Duty graphics. Shot in murky colors by Shelly Johnson, Greyhound’s visual palette adopts the flattened blue-grays of the setting, although the occasional image of a boat ablaze in the distance offers the rare flourish of red and orange. Elsewhere, its black night scenes may present the same problem for people who complained about “The Long Night” episode of Game of Thrones because of their inadequate televisions. The sheer digital sheen of everything on display makes the film seem plastic, whereas Johnson’s mobile camerawork inside the narrow corridors and passages of the ship gives us a sense of being there.

Had Greyhound been made in the 1960s, it would have starred John Wayne and presented an unchallenging, gung-ho picture that would seem outdated by today’s standards. Here’s a war film that cares nothing for contexts, human or political, and instead dwells on recreating a battle. It’s the same creative impulse that drives people to reenact the Civil War, except it cost $50 million to produce. The film contains a few genuinely thrilling moments near the end, including a tense sequence where a German boat comes so close to Krause’s ship that his guns cannot reach it, and a final note of victory after a British commander issues a job-well-done. But regardless of how well Greyhound captures a moment-by-moment naval battle in all its official procedures and operations, its digital format and dimensionless script prevent the material from leaving an impression.