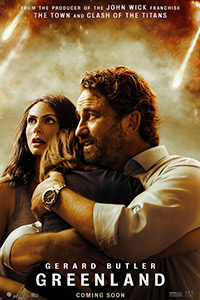 Like most viewers, I went into the Gerard Butler disaster movie Greenland expecting another Geostorm (2017), the kind of blockbuster that delights in one scene of devastation after another. You know the sort—call it the “Roland Emmerich Special”—where doomed innocents look with awe at the oncoming tsunami or cloud of deadly volcanic ash and utter “My God” before it overcomes them. What’s surprising is how this movie doesn’t enjoy terrorizing its characters with horrifying natural phenomena. Screenwriter Chris Sparling and director Ric Roman Waugh consider small-scale humanity in the face of an overwhelming situation. Indeed, Greenland feels less like a disaster movie than a thriller about how fast society breaks down when faced with an unpredictable situation. And if the last four years have taught us anything, it’s that people will quickly turn on one another when frightened.

The approach recalls Steven Spielberg’s take on War of the Worlds (2005). That underrated Tom Cruise vehicle centers on a family’s journey through a global alien invasion, concentrating on their fractured dynamic and how the situation brings them closer together. The details of the alien invasion remain almost peripheral to the family’s experiences moment to moment. Similarly, the catalyst in Greenland feels secondary to the immediacy with which the movie follows its characters. It’s about the world coming to an end, but it’s also grounded. Hailing from another solar system, a large comet nicknamed Clarke races towards Earth. Astronomers say it will narrowly miss the planet, but its long tail carries an endless supply of ice and debris, along with an unexpected planet-killing chunk set to hit Earth in two short days. There’s no time for a last-minute mission to train oil workers into astronauts, send them into space, and detonate the object. Impact is inevitable.

But at first, the comet seems far away and the danger unknown, something newscasters report about in the way they might a meteor shower light show. The opening scenes show Gerard Butler’s John Garrity going home from his job as a structural engineer. His relationship with his wife, Allison (Morena Baccarin), is rocky—they are separated, and he’s only home to help with a birthday party for their young son Nathan (Roger Dale Floyd), a diabetic. While John and Nathan shop for some last-minute groceries, John receives an emergency message on his phone, telling him his family has been selected for emergency shelter. No one else in the grocery store is getting a call, so why him? The message supplies instructions and tells him, “No one is allowed with you. There are no exceptions.” The situation seems unreal until a large fragment of the comet hits Tampa, and in Atlanta, the shockwave knocks John off his feet.

What’s so effective about these early scenes is the confusion and pointed lack of exposition. John packs his family in their vehicle and races toward a top-secret airbase. The plan remains unclear. Presumably, they will fly to a secure location or underground bunker to avoid what soon becomes an impending extinction-level event. Other families hear about the selected few and wonder why they didn’t receive a call. Only later do we learn John was picked for survival by the government because of his engineering skills. The highways become clogged with cars. Looters take over the streets. Crowds of people flood the Air Force base. Screenwriting 101 tells us that whenever a child has diabetes, it will become an issue later on. And sure enough, that’s the case. In a series of frantic events, the family misses the plane, and John becomes separated from Allison and Nathan. The movie turns from a race to escape the comet into a desperate search to reconnect in a chaotic world, where Good Samaritans aren’t always what they seem, and people will turn to murder if they think it will get them a spot on a plane.

Watching this movie after ten months of living in a pandemic, it’s impossible not to recognize the familiar ways in which Greenland uses an episodic structure to capture how people react in a scary situation (some people have COVID parties, some do the right thing, and some turn into unfeeling monsters). David Denman and Hope Davis play a couple who agree to give Allison and Nathan a ride, but soon their offer twists into a nightmarish attempt at self-preservation. On the other side of the spectrum, Scott Glenn appears as Allison’s father, offering his grizzled take on fatalism and family responsibility. Each sequence feels vaguely derivative and yet well-handled by the actors and director. And the movie doesn’t rely on spectacle, aside from a frightening sequence of falling “molten debris.” The comet appears in the sky, and the movie cuts away to the occasional impact explosions—rendered with so-so CGI. But there isn’t a special FX centerpiece to the movie; rather, the story unfolds in a progression of human circumstances.

Greenland is the kind of movie that doesn’t always feel like there’s an inevitable happy ending. I remained unsure whether the family would survive their ordeal and make it to safety (inside a bunker located in the titular country). It does a good job of masquerading as something deeper than your average disaster fare, recalling more elevated movies like Lorene Scafaria’s Seeking a Friend for the End of the World (2012). Ultimately, it proves more conventional than it feels, but in a way that I appreciated nonetheless. Everyone is doing excellent work: Butler dials down his usually hammy screen presence, Baccarin commits to her desperate mother role, and the supporting cast is impressive. Although it’s tempting to dismiss Greenland for its tropes and similarities to other movies, I found myself immersed in the by-the-moment urgency of it all. If nothing else, it reminds us that well-worn material can still be enjoyable.