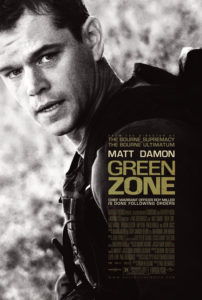 The misleading marketing campaign for Green Zone wants you to believe that what you’re seeing is ostensibly another entry in the Bourne franchise, except with a different character placed in the tumultuous setting of 2003 Iraq. Paul Greengrass, the director of The Bourne Supremacy and The Bourne Ultimatum reteams with Matt Damon, the action hero himself, for yet another series of shaky cam-filmed covert ops. The result has better intentions than your average superspy yarn, however, and even offers a hearty dose of roundabout political commentary to contend with its fast-paced action scenes. What you get is ultimately more like All the President’s Men than your typical Bourne fare.

Damon stars as Chief Warrant Officer Jason Miller in place of Woodward and Bernstein, only he’s armed to the teeth and doesn’t have to worry about journalistic integrity. His own ideology concerns the reasons for going to war; if his team can find weapons of mass destructions (WMDs) in Iraq, all the lost American lives might be worth it. But the top secret source that provides his superiors with intelligence on the location of WMDs has offered nothing but dead end leads. Miller goes to his military superiors, who of course refuse to question the information handed down to sniveling Pentagon intelligence official Clark Poundstone (Greg Kinnear) from an anonymous source called “Magellan”.

When Miller’s crew keeps coming up empty-handed mission after perilous mission, Miller isn’t the only one to ask why. There’s the CIA chief in Baghdad (Brendan Gleeson), the Wall Street Journal correspondent (Amy Ryan) who first printed the claims from Poundstone’s source via Poundstone himself, and even a local Iraqi named Freddy (Khalid Abdalla, from The Kite Runner) who serves as Miller’s makeshift interpreter. None of them buy the idea that WMDs are in the locations the intel says they are. And when they start asking questions or get too close to the truth, Poundstone sends in Major Briggs (Jason Isaacs), his brutal soldier-hound, to clean up the mess. Miller makes it his personal mission to stop Poundstone from covering up his war-mongering schemes. But since the story takes place in 2003, there’s not much hope of Miller exposing Poundstone’s conspiracy. That’s why Green Zone is almost a fantasy film.

This setup poses an intriguing series of questions and an oversimplified answer. Consider Miller and his comrades on the left, ready to pull the trigger of the smoking gun on Washington for rushing into an illegal conflict that serves their own selfish needs. Consider Poundstone on the right, an American exceptionalist and bureaucrat of the highest order, willing to place innocent lives of American soldiers and Iraqi civilians on the line to do “what is necessary”. Somewhere in the middle is Freddy, who, despite his country being ravaged through the American invasion, determines to push through the madness of war in the hope of something better. In the last scenes, the film seems to suggest that neither the left nor right side are correct. Instead, the idea is to accept the horrible little situation America has made for itself and move forward. But sometimes getting angry about the past is what prevents past crimes from occurring in the future.

Loosely based on the nonfiction book Imperial Life in the Emerald City: Inside Iraq’s Green Zone by Rajiv Chandrasekaran, the screenplay by Brian Helgeland (Mystic River) suggests the hypocrisy of American bureaucrats sitting around the pool at Saddam Hussein’s former palace sipping margaritas and enjoying a swim, but it also believes the invasion was necessary. The film expresses its anger over the way the situation was handled, but then resolves to not dwell on the problem and move on. Trouble is, if we’re over there under false pretenses (which the film fully admits), why should we then just accept our own two-facedness and not try to correct a mistake? Is it so impossible to correct our error, or at least try? Is America content with being corrupt? The film resolves to stomp its feet in anger over the circumstances, take a deep breath, and then move on—all through the final reaction of the Freddy character. By taking such an intentionally ambiguous, almost stoic stand in the end, the film will likely split audiences depending on their politics.

But perhaps this review has done the film an injustice, because no matter which side your place your sympathy politically, Green Zone is an exciting film and Damon is a capable action star. Greengrass, who also helmed the too-soon 9/11 dramatic reenactment United 93 in 2006, combines his passion for modern political drama with escapist, Jason Bourne-worthy action. There’s an unrelenting tempo throughout the film that makes the viewer forget for a (very brief) moment that history has already proven nothing changes with the discovery of no WMDs in Iraq. So maybe the politically uncertain script is telling us to watch not for a message, but instead to watch for the action as the advertisements recommend. Indeed, if you can ignore the wishy-washy politics, you may enjoy the outcome for the raw intensity of some well-shot action sequences.