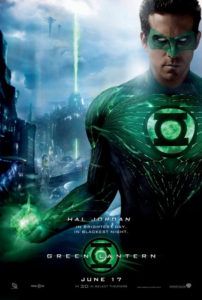 For Green Lantern, Warner Bros. reaches into its DC Comics catalog to launch a series matching the heights of their past and present Batman and Superman franchises. Long in development, the expensive and possibly rushed production shows signs of skill behind the helm, thanks to director Martin Campbell, but sloppy screenwriting. The studio sets aside artistic integrity, brought to the superhero genre by Sam Raimi, Bryan Singer, and Christopher Nolan, and takes a lesser known yet larger scale hero, who has varying comic origin stories, for a film that can’t decide if its wants to be a spatial superhero movie or an earth-bound action-comedy. Copious amounts of flat humor and hip lingo courtesy of miscast star Ryan Reynolds cheapen the potential space opera here, resulting in an uneven tone that makes this summer’s Marvel equivalent, Thor, look ingenious by comparison.

Proving the theory that four credited screenwriters (Greg Berlanti, Michael Green, Marc Guggenheim, and Michael Goldenberg) don’t necessarily mean more polished, economic storytelling, the film opens with tiresome expositional narration. We’re told about Oa, the home of the Green Lantern Corps, a militaristic band of intergalactic cops who defend the green energy of Will and fight against the yellow energy of Fear. Across 3,600 sectors of the universe, each zone is allotted one Lantern, and each member has a power ring capable of realizing anything the wearer imagines, and with them, the Green Lanterns seek to eliminate evil throughout the universe. The filmmakers couldn’t figure out a clever way to work these details into the plot, so we’re just told, and so I’m telling you.

When one Corps soldier called Abin Sur (Temuera Morrison) receives a mortal blow from the film’s villain, he seeks a replacement on Earth. There, his ring finds a reckless test pilot with daddy issues, named Hal Jordan (Reynolds, in full Van Wilder mode), who then trains to become the first human Green Lantern. Full of impulsive energy and sarcasm, Jordan doesn’t think he has what it takes to be fearless, one of the chief principles guiding the Corps. He’s outmatched on Oa during a brief training sequence, as his instructors, the fish-bird Tomar-Re (voice of Geoffrey Rush) and beefy Kilowog (voice of Michael Clarke Duncan), prove Hal’s inexperience. Frustrated, Hal walks away, because that’s what his melodramatic past has taught him to do, and returns home to wallow around his former girlfriend (Blake Lively) and her top-secret military friends (including Tim Robbins in a flavorless senator role). But villainy soon rears its badly mutated head and demands a hero.

Superheroes need a dynamic villain, and this film teases one, squanders another, and fills the void with an ambiguous cloud monster. An archnemesis to the power of Will, the evil mass known as Parallax feeds on Fear and consumes worlds not unlike Fox’s near-criminal rendering of Galactus in Fantastic Four: Rise of the Silver Surfer. I would call it faceless, but that wouldn’t be entirely true: it forms a humanoid head with which it makes scary faces and speaks in a demonic voice. Animated with textured computer graphics, the alien mass forms obscure constructions and never fully congeals as a character, and therefore never grasps the audience. When will Hollywood learn that superheroes fighting vagueness isn’t all that interesting? Fortunately, some of Parallax’s goo gets into geeky, socially awkward scientist Hector Hammond (Peter Sarsgaard), who proceeds to grow an elephantine head, develop mental powers and a definite taste for evil as the film’s more tangible villain. Unfortunately, Hammond is an underdeveloped character with whiny motivations, who never feels very dangerous and only serves as a second-tier role next to Parallax.

On reserve until the sequel, if one gets made, is Sinestro (Mark Strong, effective as ever), Hal’s shifty-eyed trainer whose villainous intentions (dun, Dun, DUN!) aren’t revealed until the end credits. Sporting a pencil-thin mustache normally associated with old-timey movie villains, a large cranium, and pinkish-red skin, Sinestro, Green Lantern’s archnemesis from the comics, represents one of many major missteps in franchise films of late. Hollywood wants to establish and reestablish franchises, but they’re doing so by telling half-hearted origin stories and leaving the hero’s most iconic battles for further down the road. Consider titles like TMNT or Robin Hood, in which the respective arch-villains (Shredder, Prince John/Sheriff of Nottingham) are left for future sequels that will never be made. But if those filmmakers just gave audiences what they wanted and embraced the proven myths, their movies may not have failed in the commercial market. Then again, Batman Begins defied this trend. Perhaps the moral here is for Hollywood to concentrate on telling a good story, as opposed to establishing a franchise as a business plan.

Alas, the final showdown features a jocular Reynolds battling a tendril-laden smoke monster with imaginary green weapons. Reynolds does his best, although his best is nothing beyond what you’d expect from an actor best known for garbage like Waiting. This is not a performer with emotional range, just a recurring act. He never loses us in his performance or allows us to forget he’s acting. With the exception of Buried and maybe The Amityville Horror remake, Reynolds has never disappeared into a role, but usually his dry wit and playful remarks make up for that. Here, Campbell took a risk casting the young star, who’s been attached to other, more appropriately humor-defined superhero roles like Deadpool and The Flash. Campbell’s gamble ultimately fails, however, largely due to the unfocused storytelling, and the actor’s inability to wash over the plot’s many flaws with his performance. The tongue-in-cheek humor throughout, which Reynolds delivers well enough, feels desperately hip, resulting in needless side characters like Hal’s computer nerd buddy, played by Taika Waititi—who manages to utter the line “Dude, you’re a superhero!” as if the audience wouldn’t roll their eyes.

Campbell, whose craftsmanship deserves lasting praise on titles like GoldenEye, The Mask of Zorro, and especially Casino Royale, bites off more than he can chew with more than 1,300 special effects shots using expensive computer animation by various FX houses. Most of the effects are serviceable, some are distracting, and others still are downright awful. Look at the cartoonish aliens in charge of Oa, immortals known as Guardians, or any one of the 3,600 designed Corps in their world. Shoddy animation makes them all look like rejects from George Lucas’ recent Star Wars prequels. And Hal’s ring power never looks better than a blur of phosphorescent light, occasionally taking the shape of military weapons or a giant fist. My screening was in 2-D and looked fuzzy at times; 3-D screenings should only worsen the effects.

Even with lowered expectations, it will surprise superhero movie fans how by-the-numbers Green Lantern proves to be. Even non-fans will notice the blandness and predictability of the whole thing. Overcoming a personal tragedy, defeating various villains, and discovering his powers with a trendy soundtrack to guide his way, Reynolds’ Hal Jordan is plain as can be, even offensive in an age where this genre has elevated itself with dynamic films such as Spider-Man 2 and The Dark Knight. It plays like a superhero movie from ten years ago, when drivel such as Daredevil and Ang Lee’s Hulk were still muddling through how to reinvent comic mythos with cinematic gravitas. Instead, here’s a big-budget movie that allows itself to be dramatically outdone by animated counterparts like Green Lantern: First Flight. Assembled competently by Campbell, superficial production values and characters developed from generic superhero clichés make this potential tentpole summer blockbuster a disappointing misfire of tone and execution.