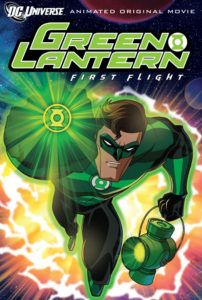 Once again, Warner Bros. Animation proves superhero movies are best left to a cartoon medium, be it the printed page, or in this case, a piece of wondrous animation unlimited both in breadth and scope. Green Lantern: First Flight does more in a little over an hour than most live-action comic-book adaptations could do with bloated running-times and overfed salaries. It involves more characters and fantastical locations than any Hollywood budget could allow, and it doesn’t limit itself in any way, narratively or otherwise.

What the producers at Warners—namely Bruce Timm and Alan Burnett, creators of Batman: The Animated Series and a dozen animated DC Comics properties since—have done is birthed the comic book into a living, breathing form. They’ve reevaluated canon, condensed years of storylines into a consumable structure, and shown once again that animation has no boundaries. Their new formula of creating PG-13 rated features debuting on home video has created a small library of classic cartoon animation, including Superman: Doomsday, Justice League: New Frontier, and Wonder Woman. They’ve chosen directors like Lauren Montgomery, whose eye for iconographic superhero imagery seems to translate directly from the comic’s page. The filmmakers’ only error is not releasing their movies into theaters where larger-scale audiences would gobble them up.

Green Lantern: First Flight begins like so many superhero origin stories, with something crash-landing on earth and launching a marvelous chain of events. Here, pilot Hal Jordan (voice of Christopher Meloni), finds himself ripped from a military flight simulator only to come face-to-face with a dying alien. Before the alien dies, it tells Jordan that he’s been selected by The Ring as the new Green Lantern, an intergalactic police force patrolling the known universe, sporting power rings that render thoughts into green energy constructs. Meaning, if the “officer” thinks of slamming a big cream pie in an enemy’s face, the ring will produce a glowing green pie and fulfill the thought. The power is limitless—and, needless to say, imagination is a must. More than once throughout the film, Jordan renders Earth-specific objects to thwack his enemies, such as when he creates a green energy metal folding chair to bash someone good, or a big green energy fly swatter to smack an insect-like alien.

Gathered by a group of Lanterns lead by Sinestro (voice of Victor Garber), Jordan stands before a high council. These omnipresent psychic beings created the green rings’ power source and established the idealistic universe-order of the lanterns. They determine Jordan will be accepted as his district’s Green Lantern on a trial basis, but he’ll have to mentor under Sinestro. There’s no point in telling you Sinestro turns out to be evil—with a name like that, he was born to be a supervillain. So, what we have here amounts to your standard cop yarn. In this sort, a fledgling newbie realizes his mentor is corrupt and must outmaneuver him to take him down (but only after exploring this space-cop universe of nightclubs filled with alien scum and massive cities destroyed by super-powered battles). Just good cops and bad cops duking it out—simple as that, except with aliens, power rings, and elaborate deep space scuffles.

Those accustomed to Warners’ DC Comics superhero animation style, complete with square jaws and slightly rounded, geometric bodies, have an advantage over viewers used to Disney or Pixar animations. Certainly, these aren’t masters of light, nor illusionists creating the impression of three-dimensions. Instead, the filmmakers have chosen a traditional two-dimensional style, one that feels more natural as a step-up from the comic’s page to animation. Familiar to comic readers and viewers of the ongoing DC Comics cartoon series for Batman, Superman, Justice League, and the subsequent animated features, the universe is smartly designed to appease both the cartoon’s budget and the fan’s need for artistic sameness.

With all the drab, brainless junk released by Dreamworks and Fox in recent years, the animated movie has become something to lament. Only on rare occasions does Disney alone produce cartoons worth viewing, whereas their partner Pixar remains firmly enthroned as an animation king. Furthermore, the superhero genre hasn’t improved much despite advances such as Batman Begins, The Dark Knight, and Iron Man; we still have to deal with the likes of X-Men Origins: Wolverine. Only Warner Bros. Animation has achieved the perfect balance that will challenge the now-in-production live-action Green Lantern film, reportedly directed by Martin Campbell (Casino Royale) and starring Ryan Reynolds in the title role. Imagine how expensive bravado energy clashes would be for Hollywood, how lousy the computer-generated aliens will look, and how lackluster it will seem in comparison to the singularity of Green Lantern: First Flight.