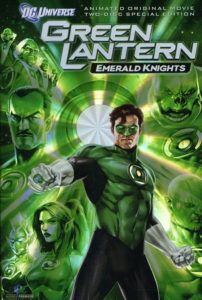 With a major motion picture adaptation of the DC Comic Green Lantern just around the corner, Warner Bros. set their animation division, overseen by executive producer Bruce Timm, on a commercial venture to exploit consumer audiences already deep into Green Lantern Mania. As if marketing tie-ins ranging from action figures to Ryan Reynolds’ face on countless junk food items weren’t enough, Warner extends their promotions into the home video market with the latest from their Warner Premiere offshoot. Green Lantern: Emerald Knights recalls the lackluster anthology Batman: Gotham Knight, which debuted weeks before Christopher Nolan’s The Dark Knight opened in 2008, but it may provide some comic book background for viewers not familiar with this hero.

Directors Chris Berkeley, Lauren Montgomery, and Jay Oliva helm four origin-based stories told in flashback during another, over-arching storyline. Each tale focuses more on the “The Green Lantern Corps”, a band of intergalactic cops, than the human hero in the upcoming live-action film, Hal Jordan, here voiced rather plainly by Nathan Fillion. The whole serves the simple purpose of giving moviegoing viewers some idea of where these Guardians of the Universe come from, as the Hollywood adaptation will no doubt breeze over such detailed backstories of its supporting characters. For comic enthusiasts devoted to the iconography of the original character, who debuted in 1959 and has survived various incarnations and reinventions since, the result will feel watchable but not consistent enough to enjoy as one piece.

Written by co-producer Alan Burnett, as well as comic figures Geoff Johns and Todd Casey, the story begins with the Green Lantern Corps being called to duty against an antimatter villain known as Krona. While the troops prepare themselves for a perilous battle, Jordan takes a few moments to preach gospels from the origins of the Green Lantern planet, Oa, for his young recruit in training, Arisia (voice of Elisabeth Moss), like scripture, with chapter and verse citations included. After that, young Arisia probes into the legends of her comrades: gruff bruiser Kilowog (voice of Henry Rollins) takes on his drill sergeant and we discover the term “poozer”; fiery heroine Laria (voice of Kelly Hu) confronts her father; the villainous Bolphunga (voice of Roddy Pipper) learns why the Lantern named Mogo doesn’t socialize; the late Abin Sur (voice of Arnold Vosloo) defends future villain Sinestro (voice of Jason Isaacs). And the 84-minute feature ends with an epic battle between the Corps and Krona.

Stricken with familiar comic book formulas, the 2-D animated movie does less storytelling than merely providing an outlet for cartoon action. However, unlike Gotham Knight, the animation styles do not vary from story to story; rather, they remain consistent throughout by employing Warner’s classic approach established with Batman: The Animated Series. Indeed, one of the best aspects about Warner’s previous Green Lantern animated feature, First Flight, was its epic scope fuelled by the limitless power of animation. Moreover, that story provided as much character as it did escapist action, with impressive sequences and striking visuals, backed by a well-written comic yarn. Given the brief running time here (albeit lengthy for a DC/Warner animated feature), every short story—with the exception of “Mogo Doesn’t Socialize”, easily the best of the bunch—dwells far too long on brutal action scenes that earn the movie’s PG-13 rating. As entertaining as they can sometimes be, the action never makes up for sometimes clichéd themes all too familiar for followers of any comic book, DC or Marvel or otherwise.

Debuting on home video, Green Lantern: Emerald Knights becomes an easy recommendation for preteens and youngsters unfamiliar with this particular DC superhero, if parents don’t mind a cartoon with light swearing and some minor blood. Despite being around for more than fifty years, Green Lantern isn’t anywhere near as popular as Batman or Superman, so here’s an undemanding catch-up solution (although, skimming the character’s Wikipedia page might be more informative). For adult fanboys, to which this material is marketed, viewers will no doubt feel disappointed, certainly underwhelmed, by Warner Animation’s lasting reliance on origin stories. Rather than reminding us where these heroes came from, the studio might consider expanding the mythologies of their heroes instead of incessantly reaffirming them. A sequel to First Flight would have easily added to Green Lantern Mania as much as this unnecessary commercial-of-a-movie.