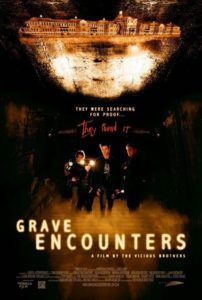 In the debut for Colin Minihan and Stuart Ortiz, otherwise known as The Vicious Brothers, a cocky ghost-hunting TV crew shooting their sixth episode comes across some genuine paranormal activity in an abandoned insane asylum. Barely released in U.S. theaters, the growing cult favorite Grave Encounters tracks a 76-hour period where the show’s crew is locked in the asylum for a television gimmick gone awry. The tension grows unbearable as the resident poltergeists toy and interact with the frightened crew, who are caught off guard by actual ghosts. Made in the “found footage” tradition, the movie makes a half-hearted effort to try and convince us what we’re seeing is real. But once we get beyond the deceit, the procession of cliché scenes is presented with an undeniable amount of horrific energy, marked by some interesting changes in the setting and creepy creature design.

Every movie lunatic asylum has a crooked backstory about some mad scientist or deranged patient running amuck and forcing the institution’s closure. Maryland’s Collingwood Psychiatric Hospital has both. It was shut down some 50 years ago because the resident Dr. Crazy gave a few too many lobotomies and conducted Satanic ceremonies, making the hospital a breeding ground for tormented ghosts and associated local legends surrounding the place. There’s also the story of one patient who killed herself in a bathtub because Collingwood drove her to it. Today, a crusty old caretaker (Bob Rathie) admits to hearing weird noises, while the two-faced host of the television crew, Lance Preston (Sean Rogerson), bribes a gardener to make up a story for the camera about seeing a ghost. Lance quotes the Ghostbusters book of supernatural terminology as he and his crew of six are locked inside overnight, unable to escape through barred windows or locked doors. At 6 a.m., the caretaker will return to release them.

Their shoot begins by staging various phony séances with the group’s hammy psychic, an actor who admits he’s just playing a role. It’s all fun and games until their techie Matt (Juan Riedinger) goes missing, sending the others into a mild panic. Chill airs fill the hospital rooms, and inanimate objects begin to move on their own. Everyone’s scared, and when they rush to the front door, they find it’s been replaced by a wall. Suddenly the hospital has turned into a shifting nightmare intent on keeping them inside and killing them off one-by-one. Most startling is when they come across ghostly patients who turn to reveal blackened eyes and warped mouths filled with blackness, an unsettling and reoccurring sight that makes the subgenre’s inherent wobbly camerawork all the more frightening. Yeah, I would run away from these things too.

Worse than the ghosties is the situation itself, because when the filmmakers are willing to begin playing with special FX and unlimited supernatural phenomena to shock their audience, the somewhat limited scares of comparable fare like The Blair Witch Project and Paranormal Activity suddenly seem like child’s play. Now the audience, accustomed to the usually lame jolts innate to “found footage” fare, doesn’t know what to expect. The scary use of a bathtub filled with blood marks the movie’s most jaw-dropping death scene. But the most haunting aspect is when 6 a.m. rolls around and the caretaker is a no-show. Then hours begin to pass, everyone begins arguing with one another, and all at once, they realize the sun hasn’t come up. In other words, everyone is done for, the situation growing more and more hopeless with every turn.

Grave Encounters is not a new or even particularly inventive experience. The Vicious Brothers demonstrate an effective use of established techniques and plot formulas, but their movie lacks characters we care about. What the movie does have is momentum—a scenario that won’t leave audiences feeling like the scariest scene came at the last moment when the protagonist’s camera suddenly (and inevitably) cuts off. The scares endure and go in wilder directions than the usual “found footage” movie, which often resists showing its audience much of anything. As such, it’s a better-than-usual entry in a tired subgenre because it doesn’t play by the same rules as those like it. It reaches out and grabs for you, spinning the faux reality conceit of the subgenre on its head. Moreover, setting your movie in a haunted asylum does wonders. When it’s all over, there’s only one question remaining: Why can’t this happen to the douchebags on Ghost Adventures?