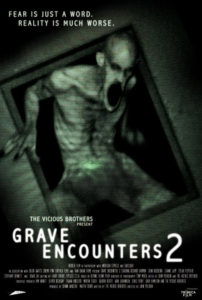 Grave Encounters 2 is another “found footage” yarn, about the fifth released in 2012. This one’s about a camera crew looking to catch proof of the paranormal in an abandoned mental institution. Never a good idea. The premise follows the aftermath of 2011’s cult favorite Grave Encounters, which the characters in this sequel have seen and question its legitimacy. We see fanboy video reviewers claim it’s just a movie, while others insist it’s real. The question is, was it a documentary or just another piece of genre fiction? Set at film school populated by seemingly film savvy fratboys and aspiring horror damsels, this sequel’s main character, wannabe horror impresario Alex (Richard Harmon, think Robert Pattinson except not), investigates only to discover evidence suggesting the cast and crew of the original have disappeared.

What better way to search for them than by heading into a haunted asylum and making a documentary in the process? Cue typical “found footage” discussions about filming everything “because the world will want to know.” Also fuelling Alex’s curiosity are mysterious, anonymous IMs from an online source named “Death Awaits,” which, if you recall, was the warning stenciled on the front doors of Collingwood Psychiatric Hospital in the first movie. Another bad sign gone unheeded. Whoever’s sending Alex messages feeds him clues that imply the first movie was not a work of fiction, and the real Collingwood is located not in Maryland but Vancouver. Once Alex and his crew of fellow film students (i.e. victims)—his producer (Dylan Playfair), lead actress (Leanne Lapp), and tech crew (Stephanie Bennett and Howard Lai)—get passed an antagonistic security guard (Sean Tyson), they enter the “real” Collingwood and find it’s no less haunted.

The screenplay, by the original’s writer-director duo known as the Vicious Brothers, at least acknowledges its own stupidity. When the characters begin making obvious horror movie mistakes, like when Alex proposes splitting up to look for their lost friend, they ask “Are you serious?!” Being a self-proclaimed “genius of horror” doesn’t mean Alex is incapable of making the same silly choices thousands of dead victims in a thousand horror movies have made before. Nevertheless, these choices are made because the filmmakers can’t imagine any other scenario for characters trapped in a haunted insane asylum. Indeed, once the group realizes they’re trapped, the story plays out like carbon-copied version of the first, with a twist here and there for good measure. Unfortunately, none of the characters are interesting enough to convince us to care; they’re all annoying fratboy types whose aggressive, “dude”-laden shtick grows tiring within the movie’s opening scenes and lasts throughout.

After half the movie goes by with film students running for their lives away from freaky-faced ghosties in the haunted asylum, they find Lance Preston (Sean Rogerson), the sole survivor of the ghost hunting TV crew who disappeared in Grave Encounters. Although at the end of the first movie he was lobotomized by Collingwood’s resident mad doctor, Preston seems well enough now, despite Rogerson’s overacting. A little the worse for wear, Preston has been living in the depths of Collingwood, doing what people do when they living in the basement of a haunted asylum: eat rat, write crazily on the wall, making maps of the facility’s elusive doorways and shape-shifting walls. Preston is convinced there’s a way out through a mysterious red door in a lower corridor. The question now becomes whether escape is really behind the red door, or if something even more horrific than the hospital is behind it. My vote is for the latter.

Commercial and music video director John Poliquin makes his feature debut here and engages in yawn-inducing “found footage” tricks ranging from wobbly camerawork to moments when the camera cuts out altogether. It’s capably made, yet his tricks are so apparently derived from other entries in this subgenre, the plot so palpably recycled from the original, that watching Grave Encounters 2 becomes an exercise in trying to find something you haven’t seen before—in other words, an exercise in futility. Then again, after Paranormal Activity 4, [Rec]³ Génesis, and V/H/S, all released this year along with the innovative Chronicle, the “found footage” subgenre has grown beyond tedious. There are more “found footage” horror movies hitting theaters these days than there are all other brands of horror combined. After enduring so much of the same old crud, this critic would gladly welcome a bloody slasher, zombie flick, or Stephen King adaptation to break up the “found footage” monotony.