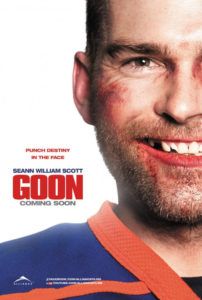 Recent events in the sports world have raised concerns about safety after a string of serious injuries were received and inflicted by roughhousing hockey players. But in the world of movies, we can set aside our reservations about violence in professional sports and enjoy the sadistic and vulgar spectacle that is Goon, a hockey comedy in the realm of Slap Shot (1977). The movie was based on the book Goon: The True Story of an Unlikely Journey Into Minor League Hockey by Adam Frattasio and Doug Smith, and then adapted by screenwriters Jay Baruchel and Evan Goldberg. It follows co-author Smith, here renamed Doug Glatt and played pitch-perfectly by Seann William Scott, who goes from a lowly bouncer with no purpose in life to an unstoppable minor league enforcer capable of downing his opponents with devastating blows and a seemingly infinite tolerance for pain.

To be sure, much of the movie’s appeal rests in the same quality that makes hockey arguably the most escapist sport to watch—the fact that we observe as ice-skating gladiators circle the arena and crash into each other, the possibility for brutalizing fisticuffs ever-present. It’s the same reason people go to air shows, because subconsciously, they want to see a plane crash. Anyway, Goon is much more than just an audience’s raw desire to see one gladiator demolish another in the rink. It’s a sweet story about a nice guy who just wants to feel like he’s part of a team. He’s not particularly smart and never really knows what to say, but he’s genuine, and that’s what makes his story interesting in its familiar rags-to-riches formula.

When the movie begins, Doug Glatt isn’t a hockey player. Being from Orangetown, Massachusetts, he’s just a casual fan of the Orangetown Assassins. One night Doug’s best friend Pat (Baruchel), a foul-mouthed spaz with a mullet and shaved lines above his ears, heckles a player into the stands, and Doug knocks the player out to protect Pat. The Assassins’ coach (Nicholas Campbell) recruits Doug as an enforcer, though he’s not exactly graceful on the ice. Doug eventually moves up to the Canadian minor leagues and joins the Halifax Highlanders. (Meanwhile, his reserved Jewish parents (Eugene Levy and Ellen David) think Doug is wasting his time and suggest he become a teacher or doctor. Doug has to explain to them, “You have a stupid son.”) Now nicknamed “The Thug,” Doug earns a reputation as a top enforcer and finds himself assigned to guard the team’s star player, Xavier Laflamme (Marc-Andre Grondin). Three seasons ago, Laflamme received a nasty concussion from über-macho enforcer Ross Rhea (Liev Schreiber), Doug’s idol, and hasn’t been the same since. Of course, a steady build-up leads to Doug and Ross duking it out on the ice in the finale.

Though the film is full of bloody fistfights and gashing face wounds, what stays with you is not the brutality of it all, nor even the hilarious eccentricities of the Highlanders’ players (my favorites were the Russian brothers and how they jeered their own goalie, who responded with incredulity: “But we’re on the same team!”). What stays with you is how lovably awkward and warm-hearted Scott manages to be in this role. To further stress the oddly sweet nature of the movie, there’s a cute subplot involving a girl, Eva (Allison Pill), a self-described “bad girlfriend” who, in spite of an ongoing relationship, finds herself drawn to Doug’s authenticity. Though he may not understand the unspoken implications made by her texts versus an actual call, Doug’s sincerity wins her over.

It’s moments like these that make Goon surprising, whereas the effectively shot and edited game scenes, slow-motion fight sequences, and raunchy humor work on an entirely different level. Director Michael Dowse balances these two opposing qualities and makes a film that’s as funny as it is curiously endearing in its attitudes toward sportsmanship and love. And for those who find the sports-violence deplorable, it’s difficult not to align with Doug, who argues that being an enforcer makes him happy and feel like part of a team, so why not participate in something that affirms his life as opposed to being a nobody?