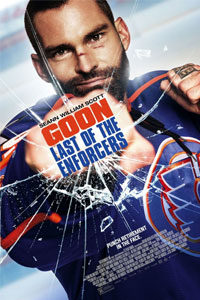 In Goon: Last of the Enforcers, comedian T.J. Miller cameos in a bit role as the new talking head of “Sports Desk,” alongside longtime real-life hockey commentator James Duthie. Much to Duthie’s chagrin, Miller drops the f-bomb on the air and repeatedly explains himself by observing nonsensically, “This is ‘Sports Desk.'” Whenever the film has a dull moment, it cuts away to the improvised moments between Miller and Duthie, even if there’s no game to justify the scene. Miller saying “fuck” in an awkward situation is enough to justify the moment. A lot of the film is like that. It engages in random, albeit funny asides rooted in its foul-mouthed characters, bloody hockey violence, and intentional stupidity. For many, that will be enough to justify this sequel to the 2012 cult favorite, Goon.

The original adopted the reckless tone of Slap Shot (1977), director George Roy Hill’s choppy hockey comedy starring Paul Newman, except with a warm-hearted protagonist supplied by Seann William Scott. Playing a dumbed-down version of real-life minor league enforcer Doug Smith, Scott stars as Doug “The Thug” Glatt (who spells his own name “Dug”), an endearingly dopey lug with a stone skull and iron fists. Much of the original depended on Scott’s sweet performance as the polite, good-natured Massachusetts native who moves to Canada to defend his fellow Halifax Highlanders on the ice. Loyal to his team, he jealously beat men to a pulp until he faced-off against his idol, Ross Rhea (Liev Schreiber). In his corner, cheering him along and oddly attracted to his brutality was Eva (Alison Pill), and their romance provided the film with enough emotional pull to justify the barrage of fist-fights and juvenile humor.

The sequel picks up when resident psycho, Anders Cain (Wyatt Russell), pummels Glatt to such a degree that it forces him into retirement. At the same time, Glatt learns Eva is pregnant, and so he takes a dull, lifeless insurance job to keep himself safe in anticipation of a family. Meanwhile, Cain has been traded to the Highlanders by his wealthy father (Callum Keith Rennie), much to the dismay of the team and its coach (Kim Coates). As Cain’s winning-obsessed attitude threatens to tear the team apart, Glatt resolves to return to the ice with the help of his idol, Ross Rhea, whom he defeated in the previous film. He trains by participating in an underground fighting competition called “Bruised and Battered” (it’s hockey without the sticks and pucks), trying to keep the risks to his body a secret from Eva. Eventually, he returns to the ice and must come to blows with Cain once more. All the while, Cain is portrayed as a powder keg with unresolved daddy issues.

Co-writer and co-star of the original, Jay Baruchel, a Canadian and avid hockey fan, takes up those same duties here, while also making his directorial debut. Writing with Jesse Chabot, Baruchel determines not to test the material and instead applies a familiar sports film archetype to the proceedings. Specifically, Goon: Last of the Enforcers looks like the lovechild of its predecessor and Rocky III (1982). If you recall, that film featured Rocky teaming up with former rival Apollo Creed to defeat a mutual enemy, Clubber Lang (aka Mr. T). Same basic concept here, except jokes about guys humping one another. Indeed, Baruchel plays Glatt’s best friend Pat, a character who loves pretending to hump his friend. There’s also an excruciatingly long sequence where Glatt falls onto Cain from behind, and as he tries to get up his attempts simulate humping. If this level of homophobic humor sounds funny to you, you’re in for a treat.

Baruchel’s sequel hits all the same narrative beats as the original: Glatt must punch-out an unruly opponent, help win the Big Game, reinforce an overarching theme about the importance of teamwork, and win Eva’s heart. The film’s technical merits are modest—the hockey scenes have been assembled with the enthusiasm and expertise of a devoted fan, and the energy behind them is occasionally rousing. And however familiar the story trajectory and filmmaking may be, there are several laugh-out-loud funny moments to savor: Returning are the two raunchy Russian brothers who take their not-so-friendly jabs about their teammate’s mother to an extreme level. Other moments, such as the intermittent appearances by Miller, prove less amusing. At the forefront, Scott remains an effective leading man in this role, perfectly capturing Glatt’s amiability. Pill, Schreiber, Coates, and other supporting players serve the material well, making the result better than perhaps it should be. It’s a wholly unnecessary sequel, but aren’t most?