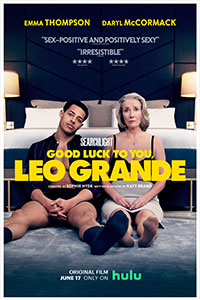 Hotel rooms can feel seedy and anonymous, or they can be a place, removed from everyday life, to explore secret desires. Most of Good Luck to You, Leo Grande unfolds in the same luxury hotel room, where the gray interior design and the ambient noise of wind and traffic heard through the window present an unassuming stage for what follows. This is where Nancy (Emma Thompson), a prim, retired widow and former religious studies teacher, arranges to meet Leo Grande (Daryl McCormack), a sex worker. It’s been two years since she lost her husband, the only person with whom she’s ever had sex, and her fantasy is to have a younger man, to reclaim some lost aspect of her youth. Nancy’s default state has been reserved and repressed all her life, and any notion of sexual desire feels shameful. She can’t decide if the room is a place for her to become “a seedy old pervert” or if, there, she will realize her long-suppressed curiosity about sex. Fortunately, Leo is not only beautiful, but he’s educated, patient, and attuned to Nancy’s uncertainty and moral panic over the situation. It will not be their only meeting.

Although this two-hander might have the makings of a play, Good Luck to You, Leo Grande, which premiered at the Sundance Film Festival, has an intimacy that a stage production couldn’t capture. The film depends on being close to Nancy and Leo, reading their layered expressions, and watching everything they don’t say. British comedian Katy Brand, credited as “written and created by,” and Australian director Sophie Hyde craft a charming story carefully engineered to embrace sex-positivity in many forms. Not only does the film offer, to quote Nancy, “quite an education” about sex workers as a career choice, but it also destigmatizes sexuality and promotes the acceptance of body types that don’t look like Greek gods. The filmmakers’ didacticism, particularly in Leo’s tendency to articulate his argument, thus the film’s message, is easily forgiven thanks to the two central performers.

For Leo’s part, he’s determined to show her a “great time.” That’s what he does, and he enjoys bringing pleasure to others—no matter how much Nancy tries to prove her shame by inquiring about his background. Has he been coerced into this? No. Is he a victim of human trafficking? Again, no. Leo assures her, “You haven’t bought me. You’ve bought my service.” He runs an escort business, and what happens between them is his decision. Still, it boggles Nancy’s mind that someone could be so self-actualized when, in all her years, she has never even had an orgasm. Moreover, when he admits to finding her attractive, her ruinous self-image prevents her from believing him. No, she would rather pay for Leo to perform her list of sex acts or “achievable goals,” as she calls them—tasks to be marked off as completed in a businesslike fashion. There’s no point in trying for an orgasm, she maintains. Be realistic. Instead, she wants to try giving and receiving oral, and various positions—things her husband refused to do and shamed her for wanting. All the while, she cannot help but probe into Leo’s life. Does he have a mother? What does she think about what he’s doing? 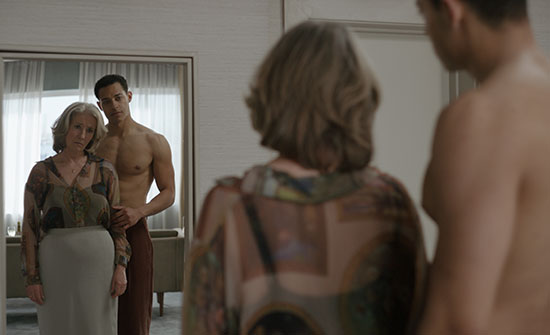 The film takes place over four “Meetings,” during which the acting feels so natural that even a star like Thompson disappears into her role. The structure is essential, as Nancy’s reservations gradually break down; Leo’s do as well. They both have defensive walls up. Achingly self-critical, Nancy feels disgusted about her own body and, in a way, resents Leo for his Adonis physique. At the same time, Leo is sensitive about how others have judged his métier and sexual openness. Curiously, they each have mother-child issues to overcome as well. She reveals herself to be hypercritical of her adult children and in a perpetual mothering schoolmarm state, while Leo’s mother has disowned him. Arguably, there’s something psychosexual about these two working out their issues together, with plenty of transference to go around. Eventually, Nancy crosses the line by invading Leo’s privacy and anonymity (neither of them uses their real names). McCormack, an Irish actor best known for Peaky Blinders, hints at Leo’s sensitivity in scenes where he appears alone or, later, in their last meeting.

There’s an evident growth process happening in Good Luck to You, Leo Grande, and a respect for the integrity of that process that never cheapens the proceedings. This is reflected in cinematographer and editor Bryan Mason’s work, as he captures early scenes with deep-focus clarity. Gradually, Nancy begins questioning her preconceived notions and dismissing her apprehensions, getting lost in the moment. Then, all at once, the image becomes transfixed in a shallow focus that reflects the passionate delirium she has never had. But the film doesn’t show the two in action until it’s earned, concluding with one of the most convincing orgasms put to celluloid. Afterward, Nancy can finally regard herself in the mirror, fully naked, without looking away or feeling ashamed. Thompson’s confidence at this moment, captured in crisp light that reveals each wrinkle and curve like a natural Rembrandt nude, is incredibly sexy.

Not long after watching Good Luck to You, Leo Grande, I was driving on a freeway outside St. Paul and saw a billboard that read, “Shackled by lust? Jesus sets free.” Besides its unintended implication that Christ is gratifying the masses, the billboard made me sad thinking about those like Nancy who follow religious doctrine, deny themselves, and then end up miserable for it. But as Nancy tells a former student in the end, “Pleasure is a wonderful thing.” Hyde and Brand deliver a film of convincing performances and progressive attitudes toward sexuality and body types. If it can occasionally feel like drama engineered as a social argument advocating for the legalization and regulation of sex work, the film’s subtle formal touches immerse the viewer in a relationship that reverses roles and genders in fascinating ways. Above all, it’s simply a delight to watch Thomson and McCormack breathe life into characters who, by the end, enjoy giving and receiving pleasure, and aren’t ashamed of what they see in the mirror.