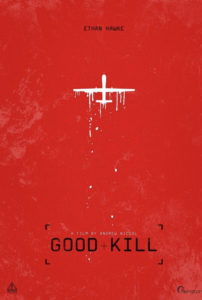 Each day before work, Major Tom Egan, a former U.S. Air Force pilot who served six tours of duty, downs a quarter bottle of vodka, drives from his quiet middle-class neighborhood across downtown Las Vegas, and onto a nearby base. Quite ironically, he dons a flight suit and enters what looks like a metal shipping container, on the door of which reads “You Are Now Leaving the U.S.A.” Once inside, he flies a military drone and spies on targets in Afghanistan. With the pull of a trigger on a joystick, he eliminates targets half a world away. With every successful mission, he says “good kill” to verify the target has been destroyed. And despite being safe from danger and able to see his wife and children each night, Tom, who is expertly played by Ethan Hawke, carries all the emotional wartime tension of characters in The Hurt Locker or American Sniper.

Writer-director Andrew Niccol once again considers the troubling relationship between technology and human psychology in Good Kill. Since his 1997 debut with Gattaca, Niccol has explored how technology can confuse us and shape our lives. Although his films have largely been a series of disappointments since his freshman effort, they’ve at least made their audiences think. S1m0ne (2002) weighed the implications of artificial characters in cinema; Lord of War (2005) featured an excellent performance by Nicolas Cage as an arms dealer who sells the latest weaponry and reaps the benefits of violence; In Time (2011) showed us a world where Benjamin Franklin’s maxim “time is money” was very literal. In his latest, Niccol tears a page from the headlines for a character study that will inevitably provoke debate about whether the use of drone strikes is justified morally and whether the approach is militarily sound.

Hawke’s nuanced performance is superb and tense as Tom struggles to keep the lid on his boiling, repressed rage. As a result, he floats through life, a perfect drone pilot capable of executing complex missions, but a distant husband. His wife Molly (January Jones), a former dancer turned homemaker, complains that he was more present in their marriage when he was deployed. His commanding officer, Lt. Colonel Johns (Bruce Greenwood), probably sees Tom as an oddity, given that most recruits for the drone program are youngsters who learned their piloting skills on videogames. Johns even admits the Air Force designed their platform to mirror Xbox, a frightening notion indeed. But then, any Call of Duty game has a mission or two that looks suspiciously similar to Tom’s strike screen. From on high, Tom performs “good kills” on warehouses or vehicles with Taliban soldiers inside, his targets disappearing into a plume of smoke and wreckage.

Niccol becomes somewhat preachy and moralizing toward drone strikes, but he offers the full spectrum of the argument on either side of Tom, despite his position being quite clear. His new co-pilot, Airman Vera Suarez (Zoe Kravitz), thinks what they’re doing is unfair and wrong, and that continuing drone strikes only serves to perpetuate violent retaliation, especially given their high degree of collateral damage in the form of women and children. Tom’s blindly patriotic backups Zimmer (Jake Abel) and Christie (Dylan Kenin) believe that one American life is worth any number of civilian casualties on the other side. Everyone’s loyalties are tested to the extreme once a CIA operator (voice of Peter Coyote) from Langley begins ordering top-secret missions where the justifications are suspect and the value of non-threat lives is nonexistent. All the while, the missions walk the line between the defense of freedom and methods used by terrorists.

Niccol’s discussions about this conflict sometimes feel ham-fisted and forced, but he gets the point across and the audience thinking about the ramifications of technological warfare. Good Kill is best in Hawke’s portrayal and emotional consideration of Tom’s mental state. As the character moves between his endless hours of drone kills and his home life in a daze, Hawke balances a look of composure, but one that is numbed by alcohol and a clear case of PTSD. Molly, who doesn’t understand Tom’s workday and often responds in passive-aggressive retaliation, tries to reach him, but he’s closed off. When Tom finally bursts in one scene, it’s a shocker for both Molly and the audience, as the character breaks his anesthetized state and his hand on a mirror. Another scene where he describes just one of his many missions to Molly brings her to tears, and we realize every moment of Tom’s life carries the weight of countless dead.

Good Kill takes a topical issue and turns it into a psychological drama, but the balance between those two dynamics isn’t always even, sometimes to graceless effect. Niccol’s treatment can feel artificial and overwrought at times, his dramatics clunky and dialogue somewhat corny. But the material is intelligent and complex, and the themes, along with excellent performances from Hawke and Greenwood, more than compensate for Niccol’s frequent heavy-handedness in his drama. At the root of Good Kill remains a significant argument about drone strikes and the unsettling consequences on their pilots and modern warfare itself. It’s a scary and thoughtful discussion, returning Niccol to his familiar theme: that our absolute faith in technology simultaneously perpetuates the developmental myth and strips us of our humanity.