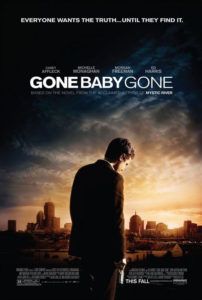 If I could write a review saying simply “See this movie!” and nothing else, and trust that you would go and see it based on my three-word recommendation, I would. Alas, most moviegoers need more convincing before dropping $8.50 on a ticket. Occasionally a motion picture is released that, as a critic, requires I restrict myself from divulging one detail too many from prospective viewers. Gone Baby Gone is such a movie. Walking into my screening, I knew not much more about it than the cast, title, and director, and perhaps that other critics had given it positive ratings. And that’s the ideal way to see any movie—to take it in without expectation or preconception.

Helmed by first-time director Ben Affleck, the story is based on Dennis Lehane’s novel of the same name (except written Gone, Baby, Gone with commas). If you recall, Lehane’s novel Mystic River was adapted by Brian Helgeland for Clint Eastwood in 2003. The stories follow a similar path: both are set in Boston; both involve plot elements of kidnapping and sexual abuse; both contain staggering turns of character. These turns are not gimmicky plot elements we see coming from a mile down the road. They infer an affecting morality play that leaves us pondering the movie for days…

Casey Affleck, Ben’s younger brother, stars as Patrick Kenzie. He and his girlfriend Angie Gennaro (Michelle Monaghan) work together as private detectives, searching out debtors and degenerates that don’t want to be found. Their business is local, and they’re good at their job because they know the neighborhood. They know Boston. On the news they catch word of a 4-year-old girl who was taken from her home. It’s a media circus. Everyone in the neighborhood, dozens of cops, and media galore are virtually camped in the mother Helene’s (Amy Ryan) front yard.

The mother’s sister-in-law Beatrice (Amy Madigan) and her husband Lionel (Titus Welliver) go to Kenzie and Gennaro, seeking the duo’s neighborhood familiarity to assist police in finding their niece. Perhaps people who won’t talk to police will talk to them. Kenzie admits he’s never handled that type of missing person case. Gennaro is afraid to get involved, fearing that finding a dead or abused child would be too much. These are honest people just trying to do good—but what does “good” mean?

Head of a local missing children’s unit, Chief Doyle (Morgan Freeman) sways Kenzie and Gennaro against getting involved, but concedes to extend them unenthusiastic professional courtesies. They’re to meet and exchange information with detectives Remy Bressant (Ed Harris) and Nick Poole (John Ashton). I won’t disclose details of their investigation, other than to say clues are everywhere. We may not notice them because Ben Affleck’s direction relies on subtleties of character, not of zoom-ins on key plot devices or dun-dun-dunnnnn music at significant moments. Characters remain human, as opposed to cliché movie mystery roles, allowing us to submit fully, and be caught off guard by where the story goes.

Our greatest shock, outside of the enthralling narrative, comes from Casey Affleck’s second powerhouse performance this year. Last month audiences likely (and regrettably) missed out seeing The Assassination of Jesse James by the Coward Robert Ford, because Warner Bros. buried the picture with a limited release; Casey Affleck played said assassin, suggesting undertones of sexual obsession and idolization. And now with Gone Baby Gone, the younger Affleck brother gives his second Oscar-worthy performance of 2007. Both performances rely on Affleck’s ability to display vulnerability just visible under the surface, as both Patrick Kenzie and Robert Ford are characters engulfed in something, or someone. Casey has come a long way from “balloon-boy” in Ocean’s Eleven, now graduating beyond one stroke-of-luck performance with the help of his elder brother.

Ben Affleck himself is a considerable talent… when he’s behind the camera. People seem to forget his Oscar win (shared with long-time buddy Matt Damon) for Best Original Screenplay in 1997 on Good Will Hunting. Audiences still haven’t forgiven him for Pearl Harbor, Reindeer Games, or Gigli, nor for his tabloid exploits, but they should be praising him for his passion projects, limited as they may be. Despite his onscreen mediocrity, as writer and director he creates profound naturalism with brutal, authentic dialogue. His camera paints a near-candid portrait of Boston, shooting real-life bar crowds and neighborhoods via guerilla filmmaking—these are people with character burned into their faces, not Hollywood actors. Narratively speaking, it recalls the viciousness of Martin Scorsese’s The Departed with corruptibility found in Clint Eastwood’s Mystic River.

Boston has become a place in film where characters test themselves by discovering a layer of their persona they never knew existed. That can be said for all of the above-mentioned Bostonian pictures. It’s being depicted as a city of camaraderie and community. Yet, in that community exist seemingly normal people who do despicable things. It’s a nice little metaphor for human nature—well-meaning, but generally cruel.