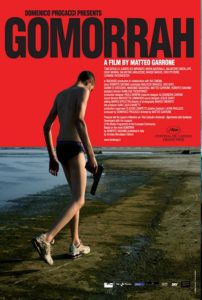 Here is a film whose presentation is about stripping away the sentimentalism and romanticism associated with gangsters, as well as the subgenre of movies that depicts them. Gomorrah examines the world of Camorra crime in Naples with distant objectivity. It presents its topic as a matter of fact, because, to be sure, the Camorra actually kills more and makes more money than the American mafia—the film quotes some $250 billion a year. (Think about how much money this is for a moment…) End titles also suggest the Camorra donates to help reconstruction efforts on the World Trade Center.

Based on the bestselling book by journalist Roberto Saviano, the filmic text is marked by remorseless killings and effective motions to keep commerce profitable. Typical mob concerns like loyalty are the driving force of life, whereas disloyalty is met with objective, dispassionate execution. Like lifting up a thriving plant from the soil and examining its poisoned roots, the film exposes the unruly operating system without acknowledging the healthy budding it supports. Removed from any mercy or empathy, the Camorra’s severe delineation between business and pleasure displayed in the film is shocking. Actually, there is no pleasure shown at all. Indeed, the spoils of their lifestyle are barely addressed, leaving emotion completely out of the equation.

Perhaps it’s best to describe the film by what it is not, since American audiences have preconceived notions about what gangster films are supposed to be. Certainly there’s no comparing it to Goodfellas, The Public Enemy, or The Godfather. There’s no “innocence lost” themes resolved by the eventual downfall of the criminal protagonist. There’s no description of “the good life” that attracts people to a life of crime. No fancy houses, expensive suits, or classy cars. The characters don’t carry fat wads of money about; in fact, they often complain that they’re barely getting by. There’s little sympathy attached to any character, and they’re already all corrupt, so when they die or find themselves deeper in the hole, there’s no drama involved.

We aren’t shown the Camorra bosses who rake in the billions mentioned above; we’re shown their underlings as they carry out orders and operate on the lowest rungs of their ladder. The structure jumps between various characters, mere samplings that in the end collide in bloody shootouts: Children deal drugs. A payment deliveryman questions his loyalty. Corrupt toxic waste management upsets a foreman. A dressmaker covertly works for the Chinese competition. And two young upstarts find some machine guns and decide to play Scarface.

Matteo Garrone directs without a hint of irony or humor. His images report naked truths with a documentarian’s eye. Shot on a low budget in the slums and back alleys of Naples, Garrone’s digital photography does not glorify, it captures. His characters are almost unreadable. They certainly avoid any tangibility in a narrative sense. Watching the film equates to viewing news footage, only there’s no anchor telling you how to feel about it. Whether we’re supposed to feel anything at all is debatable. We simply observe and accept what we see.

In a way, Garrone’s efforts are genius, as they divert from established pathways that outline an entire history of gangster pictures. In another way, communicating his ideas to a general audience will prove almost impossible because of that—the Scorseses, De Niros, and Coppolas have made sure of it. Garrone’s film has received accolades from all around the world, earning the Grand Prix at the Cannes Film Festival in 2008, a nomination for a Golden Globe (but not an Oscar), and almost unanimous high praise from several critics.

And yet, a necessary element to any successful piece of filmic art is its ongoing resonance with the audience. That isn’t here. Perhaps when reflecting upon its formal presentation, its method, a viewer might find brilliance at work. However, is the viewer emotionally engaged? Not at all. Gamorrah drifts in the space between narrative and documentary storytelling, and remains a curious but unaffecting product. True as the circumstances of this fictionalized news story may be, its effect does not penetrate or connect in any meaningful way.