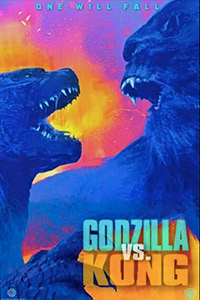 Watching Godzilla vs. Kong, I yearned for the theatrical experience. Like many of you, I haven’t been visiting the movie theater over the last year. Although I generally miss seeing movies on the big screen, its absence particularly stings when watching something like this at home. Most people will probably see the movie on a streaming platform, and that’s just fine. In a darkened room with devices put away and the volume turned up high, you get a sense of the movie’s scale, and the viewing becomes a suitable alternative. The movie is an eye-popping, eardrum-beating spectacle machine, churning out epic-sized imagery and brightly colored special FX in the Hollywood blockbuster style. But the experience might have been all the more effective in a crowded theater on opening night, with the smell of popcorn in the air and the faint sound of moviegoers buzzing with anticipation. It’s the sort of movie that I could imagine an enthusiastic crowd cheering over when King Kong makes his first appearance and tosses a tree in the air to punch a hole in his holographic enclosure.

Directed by Adam Wingard, Godzilla vs. Kong is the fourth entry in Legendary Entertainment’s MonsterVerse, a franchise that has been around for seven years and three movies. But it already feels like a hodgepodge of storylines and characters, building little anticipation for this crossover. Gareth Edwards’ Godzilla (2014) established in a slow-burning reveal that Earth was populated by MUTOs (Massive Unidentified Terrestrial Organisms), and Godzilla’s ancient mission was to protect the planet from other giant-sized monsters. Jordan Vogt-Roberts’ Kong: Skull Island (2017) established the franchise’s Kong, a fearsome building-sized ape whose merciless violence was a far cry from Peter Jackson’s genial take on the classic monster. The rain-drenched Godzilla: King of the Monsters (2019) found Godzilla in a head-to-head bout against several Kaiju, now called Titans instead of MOTUs, in a mind-numbing endurance test. The humans in these movies, though often played by powerhouse talent (Juliet Binoche, Elizabeth Olsen, John C. Reilly, Brie Larson, Samuel L. Jackson, and Vera Farmiga have all made appearances), rarely make it from one entry to the next. The throughlines and dramatic arcs in the MonsterVerse belong to the monsters alone; the humans are around mostly to provide reaction shots.

Eric Pearson and Max Borenstein’s script uses humans to set up conditions for the titular monsters to fight. Kong has been kept hidden from Godzilla inside a dome on Skull Island, watched over by the resident Jane Goodall, Dr. Ilene Andrews (Rebecca Hall), and her young adopted daughter, Jia (Kaylee Hottle), an orphaned Skull Island native who has a special bond with the great ape. When Godzilla randomly attacks the Florida headquarters of Apex (as in predator) Corporation, the company’s slimy head Walter Simmons (Demián Bichir) seeks out Dr. Nathan Lind (Alexander Skarsgard), a scientist who believes in a “Hollow Earth Theory”—the notion that all Titans come from an enclosed ecosystem at the center of the Earth. Apex wants to harness the energy that powers the Titans as a weapon against Godzilla, and they need Kong to access it. But the conspiracy theorist podcaster Bernie Hayes (Brian Tyree Henry) believes something is crooked with Apex. After joining forces with Madison (Millie Bobby Brown) and Josh (Julian Dennison), two curious teens close to Monarch, the company that monitors Godzilla, Bernie and his cohorts rush headlong into a mission to expose Apex’s dastardly plans. 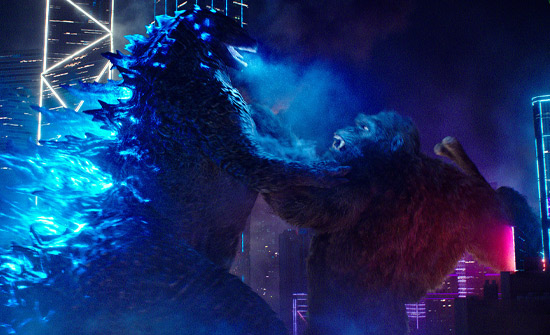 From the outset, Kong’s relationship with the little girl signals he’s no longer the bloodthirsty monster that he was in Skull Island. But what about Godzilla? Is he Earth’s defender or de facto villain here? Madison, one of the few carryover characters from King of the Monsters, believes “there has to be a reason” for Godzilla’s unprompted attack on Florida. Her father (Kyle Chandler) argues that “creatures change just like people”—a reference to his wife (Vera Farmiga), the crackpot who unleashed monsters on the world in hopes of an environmental cleansing. Anyway, both Kong and Godzilla have our sympathy. Kong’s personified characteristics, accentuated after it’s revealed that the deaf Jia has taught him sign language, make him as endearing as Koko the gorilla. Meanwhile, Godzilla is the lizard-brained defender attacking on autopilot, but he means well. Predictably, the writers take the same approach as Batman v Superman: Dawn of Justice (2016), where the title’s “versus” only represents the first two-thirds. So as not to alienate viewers rooting for one pop icon over another, the movie creates a foe that will unite the two opponents.

Unlike King of the Monsters, which was soaked in an ever-present downpour of ugly CGI, the battles in Godzilla vs. Kong appear coherent and vibrantly animated. There’s also a lively sense of showmanship involved, evident by their first encounter in the ocean, requiring Kong to leap from one aircraft carrier to another to keep away from the water-bound Godzilla. Much later, a battle in downtown Hong Kong resembles the Kaiju fights in Pacific Rim (2013), except the sequence transitions from night into daytime, allowing the viewer to appreciate the detailed glow of buildings and visual clarity of the monsters. (Just ignore how the buildings crumble like glass statues and the local population conveniently disappears.) Every rocky scale on Godzilla’s face and every strand of fur on Godzilla’s chin appears lovingly applied, lending personality to the towering characters. Their encounters also feel tactile, with each blow requiring the viewer to react audibly with an “ooh” or “ahh” or “ouch.” You get the sense that Wingard and the other filmmakers recognized that drenching the monsters in rain and concealing them in the cover of night betrayed the need to see a spectacle. There’s plenty of eye-candy to savor here between mouthfuls of popcorn, microwaved or otherwise.

Wingard’s career in independent horror has revealed his penchant for a throwback style, best seen in You’re Next (2013) and The Guest (2014). That style works its way into the neon and synth-inflected production of Godzilla vs. Kong. Tom Holkenborg (aka Junkie XL) delivers a score reminiscent of Stranger Things combined with Vangelis’ work on Blade Runner (1982), lending a majestic, futuristic grandiosity to the proceedings. Cinematographer Ben Seresin and production designers Thomas S. Hammock and Owen Paterson saturate the movie in glowing lights—strips of red, blue, pink, and purple LEDs accent technology, while blues and deep purples richly accompany the underground Titan world. Fans of classical science-fiction roots will also appreciate the Jules Verne-inspired sequence at the center of the Earth, where gravity behaves strangely, leading to a beautiful sequence with a floating Kong. Though, my favorite moment belongs to the rollercoaster-like shot that evokes the old King Kong ride at Universal Studios, which I remember enjoying as a boy.

What’s evident throughout Godzilla vs. Kong is that Wingard took care to deliver a distinct and intelligible movie that embraces some out-there ideas in a fun, fast-paced manner. Mercifully under two hours, this larger-than-life hunk of entertainment doesn’t overstay its welcome or dangle middle- or post-credits sequences at the viewer. The plot, such as it is, doesn’t require too much understanding of the MonsterVerse to grasp what’s happening, though some of the dialogue references the previous entries. But in a movie like this, where the emotional payoffs belong to a giant ape and lizard alone, the mechanics that take the viewer from Round 1 to Round 3 hardly matters. Godzilla vs. Kong does what it intended to: it supplies a few base thrills that, for the duration, make us forget our troubles and lose ourselves in a larger-than-life world. Although that’s the aim of most Hollywood products these days, this one is assembled with enough craft, plucky acting, and visual splendor that we don’t have to feel ashamed about enjoying it.