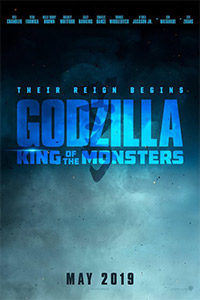 Sometimes when watching an action-packed finale in a Hollywood spectacle, the oversaturation of CGI causes your eyes to glass over and your mind to numb into a sleepy state. Somehow, the filmmakers have spent hundreds of millions on special effects, animating impossible creatures, superhero battles, alien invasions, and untold destruction, but none of it has the necessary emotion and energy to counteract our visual exhaustion or keep our attention. Certain blockbusters have this quality, where the third act descends into digital white noise, and the viewer cannot help but lose interest entirely. Competent Hollywood filmmakers know how to use CGI to enhance the material and impress their audience, whereas others resolve to throw endless computerized stimuli at the screen in the final battle and hope for the best. For that reason, Godzilla: King of the Monsters is exceptional; it’s an entire movie that functions as a relentless CGI assault on the viewer’s eyeballs, sustaining a heightened level of fireworks that would usually be reserved for the denouement. It carries on like this for the more-than-two-hour duration, and although initially diverting, it gradually wears the viewer down into a trancelike state of disinterest. Call it digital blindness, in the same way that snow blindness results from severe overexposure.

Godzilla: King of the Monsters is director Michael Dougherty’s bigger, louder, and more tiresome sequel to the 2014 reboot Godzilla, a movie that served its purpose blandly enough to earn some admiration for its technical competence and impressive cast (even though Juliette Binoche and Bryan Cranston played characters who died too soon). However, after a recent rewatch, my already lukewarm feelings about Godzilla have cooled. Not that it matters; most of the characters from the first movie have not returned for the follow-up—save for Sally Hawkins, in a thankless and throwaway appearance, and Ken Watanabe, who is forced to deliver fortune cookie jokes. The sequel also boasts a roster of recognizable names and faces, not that any of them have anything interesting to do. Each actor has been typecast in a familiar way, making it easy on screenwriters Dougherty and Zach Shields, who concentrate less on the human fodder than the enormous zoological specimens on display.

The action starts when, in the destruction caused by Godzilla in 2014, parents Vera Farmiga and Kyle Chandler lose a child, leaving their marriage in shambles and their teenage daughter (Millie Bobby Brown) in the middle. Five years later, Farmiga’s character, Dr. Emma Russell, works with Monarch, the secret agency that monitors humongous animals like Godzilla, known as Titans. Secretly, Dr. Russell also works with an eco-terrorist, played by the ever-villainous Charles Dance, and they plan to awaken the hibernating Titans to wipe out most of humanity and bring about ecological balance. It’s a standard “the Earth is dying, and humanity is the disease” argument popular among Hollywood villains these days (see Kingsman: The Secret Service, Inferno, or Avengers: Infinity War). Meantime, Monarch and the U.S. military try to stop Russell’s plan: Hawkins, Watanabe, Zhang Ziyi, and Bradley Whitford are the scientists; David Strathairn and O’Shea Jackson Jr. represent the soldiers; Chandler is the concerned Titan-whisperer who just wants his daughter back; and Thomas Middleditch provides the comic relief. 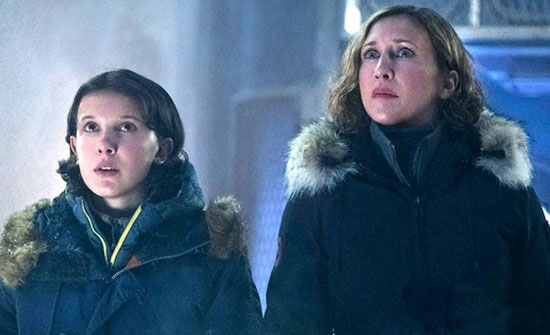 Dougherty approaches digital blindness in the opener with Mothra (a ten-story moth that spits sticky webbing), and he continues punishing us with CGI for the duration. Every major sequence—from the first appearance of Godzilla to the Antarctic emergence of the movie’s main baddie, Ghidorah, a three-headed dragon from space—takes place in some manner of visually muddy, inclement weather conditions. Battles between the Titans, such as the first clash between Godzilla and Ghidorah amid an oppressive snowstorm, are a struggle to watch because they’re so murky and obscured. These colossal monsters tangle underwater, in a hurricane, in a burning city, in the rain, or atop an exploded volcano. Along with the shaky camerawork, it’s almost as though the filmmakers don’t want us to make out what’s happening. Moreover, in each location, the image looks as though it’s been run through color filters (mostly blue, gray, or orange), giving everything a digital flatness and hued sameness that is monotonous to behold for any length of time. And while the global plot leaps around several locations the world over, somehow, as the grand finale unfolds, it does so underwhelmingly on the ruins of Fenway Park.

Amid the endless fights between CGI creatures, the humans struggle to stay out of the way, scampering about to avoid getting trampled, which isn’t very interesting. Although most of the characters are boilerplate, some of what happens on the human side is curious, such as a scene where the scientists discover a sunken city that belonged to an ancient, Godzilla-worshipping civilization, only to watch all trace of it detonated by an atomic bomb. Elsewhere, Dougherty uses religious symbolism that associates Godzilla with the resurrected Christ, who will strike down the false king from outer space, Ghidorah. And isn’t it fascinating how the main characters always manage to be the only survivors in the many toppled cities, whereas millions of other residents seem conspicuously absent, if not probably dead? Finally, after all of the movie’s talk about Godzilla feeding on radiation and using his powerful atomic pulses to save the day, the viewer is left to wonder about the fallout of these radioactive Titan battles. Even though millions of people no doubt died as the Titans fight, surely millions more will die from the cancerous effects of the Titans’ leftover radiation.

Godzilla: King of the Monsters also desperately wants to establish an expansive franchise, wherein 2014’s Godzilla takes place in the same cinematic universe as 2017’s Kong: Skull Island—all to create enthusiasm for the upcoming sequel Godzilla vs. Kong in 2020. Conspicuous references to “Kong” and “Skull Island” are meant to titillate fans and build anticipation for the inevitable meeting between the giant iguana-god and the gargantuan ape. But since Godzilla fights several Titans throughout this large-scale sequel, the notion of Godzilla coming to blows with just King Kong seems rather underwhelming. In any case, Godzilla: King of the Monsters has done an effective job of making larger-than-life creatures completely inert, and any popcorn-munching fun that might’ve come from such a show has been reduced to a dismissive shrug. The viewer watches in a perpetual state of numbness, consuming but not processing, oblivious to any attempt at story or theme because the movie’s primary concern is delivering a sensory explosion—but we experience only the drowsy effects of digital blindness.