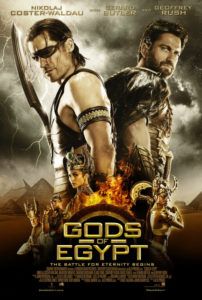 Early in Gods of Egypt, viewers are forced to ask themselves, Who thought this was a good idea? Summit Entertainment’s absurdly staged sword and sandal epic features a laughably silly script, derivative plotting and, despite no established audience or recognized source material on which it’s based, boasts a hefty price tag of $140 million. Set in a wholly fictionalized prehistoric Egypt, a world of towering gods and tiny mortals, this glammy production looks like a gilded version of The Mummy (1999) by way of Pompeii (2014) and Immortals (2011). Cheap-looking special FX and green screen work to render a mostly animated ancient world of swooshing camera movements, while the story completely avoids even a modest attempt to remain true to Egyptian mythology, history, or lore.

To give you some indication of what you’re in for, the script was written by Matt Sazama and Burk Sharplessa, whose previous collaborations include the ridiculous Dracula Untold (2014) and The Last Witch Hunter (2015). Their bible seems to be Universal’s monumental dud Van Helsing (2004), as they adopt lots of CGI monsters clashing in unintelligible, choppily cut battles. Director Alex Proyas’ overblown epic recalls his treatment of I, Robot (2004) more than his earlier, respectable work like Dark City (1998). It’s a lot of artificially fast-moving camerawork and a clear distinction between the actors and their backdrops, most of it assembled with computers as opposed to old fashioned filmmaking. Worse, the movie is populated by an almost all-Caucasian cast—a poorly timed choice considering the present #OscarsSoWhite controversy and general talk about the lack of diversity in Hollywood.

Expository narration explains that suspiciously Anglo-centric Egyptian gods live among mortals. They’re about 9 feet tall and can transform into golden-armored creatures at will. The ruling god-king Osiris (Bryan Brown, the Aussie actor from Cocktail and FX) plans to give over his throne to his only son, the arrogant Horus (Nikoaj Coster-Waldau). But the desert god Set (Gerard Butler, Scottish accent intact) crashes the ceremony to slay Osiris, his brother. Challenged by Horus, Set makes quick work of his nephew, removes his eyes, and banishes the eyeless god to the darkness. Set’s obsession with forging his own world leads to his Master Plan: killing the gods one-by-one and taking their respective godly powers for his own—all in a bid to dethrone his daddy, Ra (Geoffrey Rush, another of many Australian actors in the cast, given the Sydney shoot).

Meanwhile, Horus receives some much-needed help from a human compatriot, Bek (Brenton Thwaites), a crafty thief. Bek’s Horus-devoted girlfriend Zaya (Courtney Eaton) helps him steal back one of Horus’ magical eyes and get the god back in the battle, but Zaya dies in the process. In order to prevent her from being lost to the afterlife, Bek must help Horus stop Set’s takeover. Cue a series of schemes and action sequences, each fakier looking than the last, each more tediously composed than the last. Various gods appear and disappear from the plot, including the all-knowing Thoth (Chadwick Boseman) and the love goddess Hathor (Elodie Yung). And baddies show up seemingly at random, rising giant serpents or hiding behind sand monsters, to provide yet another actionized set piece to numb the viewer’s brain.

The script consists of cliché dialogue, while the plot borrows elements from Raiders of the Lost Ark, Lawrence of Arabia, and Clash of the Titans. As for the actors, it’s doubtful any one of them signed on for anything but a paycheck. Butler appears in full 300 mode, shouting every line and stomping about, issuing smarmy, kitschy lines like a 1980s villain. Coster-Waldau rests on his Game of Thrones laurels; though, playing a god, he’s usually onscreen in a cheapie version of the effect used to make Gandalf taller than hobbits in Peter Jackson’s Tolkien adaptations. Thwaites, who earned swoons from the teenage girls in this critic’s screening, basically plays a live-action version of Disney’s Aladdin under a frizzy wig. Boseman, who’s set to play Marvel’s Black Panther, offers an embarrassing turn, rife with snootiness, under a curious and indiscernible accent. Eaton and Yung serve only as the resident eye candy.

Cinematographer Peter Menzies Jr. drenches his frame in sand-dusted washes of yellow and orange, although he can hardly be blamed for the movie’s rather monotonous appearance. Gods of Egypt looks to have been assembled mostly on computers, where sun-scorched filters were applied with color timing programs, just as most of the characters were constructed by computer animators. And while other movies have taken the same approach and made excellent blockbuster-sized fare and believable CGI characters and settings, Proyas delivers laughably bad FX. Granted, he did the same with his 2009 Nicolas Cage flop Knowing a few years back (which I loved), but at least the script was solid and the story engaging. Gods of Egypt is an embarrassingly stupid production through and through.