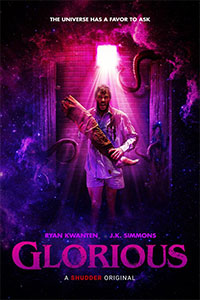 When someone in a rest area bathroom stall next to yours tells you, “The Universe has a favor to ask,” there’s no appropriate response. You could remain silent, finish your business, and leave without engaging. Or, just for fun, you could play along to determine the level of crazy in there. In the case of Wes, the protagonist played by Ryan Kwanten in Glorious, a grotesquely funny splat of cosmic horror, he doesn’t have a choice but to listen. Directed by Rebekah McKendry, helmer of 2018’s underwhelming holiday horror anthology All the Creatures Were Stirring, the film combines bathroom slapstick with Lovecraftian revelation in this enjoyable, gooey lark. Running a mere 78 minutes, including end credits, the film has the effect of a killer short story whose concept and memorable ending are so effective that its brevity and underdeveloped characters hardly matter.

Written by Todd Rigney, Joshua Hull, and David Ian McKendry (the director’s spouse), the film opens with Wes, looking strung out behind the wheel. His back seat is crammed with his belongings, and a teddy bear and a box of photos rest on the front passenger’s seat. Evidently reeling from a recent falling out with a woman, Wes seems to be living out of his car. He stops at a rest area—which, it must be said, is never a good idea—and makes some frantic choices. He burns his belongings save for a single photo of his late lover, downs a bottle of booze, and passes out. The next morning, he wakes up, pantsless, and races into the restroom to hurl. As the film’s events continue to unfold, McKendry remains cagey about the details of Wes’ past, delivering information in a clever game of connect the dots that makes you want to click “Watch Again” when it’s over to look for the clues you missed.

Although grosser events occur in Glorious, watching Ken empty his insides into the filthy public toilet may cause the germ-conscious viewer to recoil—even more than the slime and gore to follow. But just then, a disembodied voice (J.K. Simmons) from the dark stall in the corner asks in a mannered tone, “Are you recovering from inebriation?” Soon, the voice offers to name the 127 strains of bacteria he’s contracted from the toilet seat. At this point, we stop asking questions about Wes and start wondering about the seemingly all-knowing voice that comes from behind the mural on Wes’ stall wall—a painting of twisted creature with eyes and tentacles arranged around a glory hole, where the serrated mouth of the depicted monster opens. The voice claims to be a “very old, lonely god” poised to annihilate all life in the universe unless it receives Wes’ help. However insane this sounds, Wes finds he cannot escape the bathroom, and when he tries to get a glimpse of what’s inside the stall, a booming voice makes lofty threats, warning him not to look. 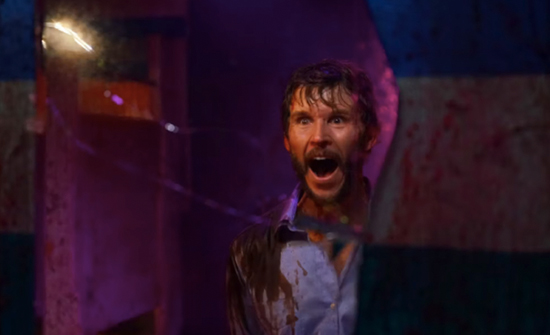 Glorious operates like a puzzle box smattered with literal potty humor. While Simmons’ voice carries on about its celestial origins and the existence-shattering implications of its purpose, McKendry deflates the moment with a quick cut to Wes using a urinal. The nimble editing by Joseph Shahood inserts playful humor into the proceedings, underscoring the film’s many comic juxtapositions: the messy and isolated location against the universe-altering stakes; Wes’ personal crisis against the god’s cosmic conflict; and later, the god’s hilarious need for Wes to “satisfy my physical form” to protect all life in existence. Indeed, McKendry implants the idea early on that Wes may have to use a glory hole to save everyone, everywhere. It’s a flourish that reminded me of an Upright Citizens Brigade sketch involving a guy who claimed to have a time machine, but in order to see it, you had to wear bicycle shorts and a leather mask.

Cinematographer David Matthews captures both the film’s comic and cosmic modes with grimy men’s room light, occasionally interrupted by a shimmering purple-pink glow that brings Color Out of Space (2019) to mind. Wes only sees glimpses of the flickering light source spied through the stall door, where undulating tendrils and a semi-transparent sack move in uncanny ways, emitting horrific sounds. Even as McKendry resorts to cheap humor at times, the Lovecraftian imagery inspires sublime dread. And aside from a few brief detours into Wes’ mind, where we meet his estranged lover Brenda (Sylvia Grace Crim), and an interlude with Gary (André Lamar), the rest area property manager, Glorious is a two-hander between Kwanten and Simmons. But even then, only Kwanten appears onscreen. Best known for HBO’s True Blood, Kwanten does a fine job concealing the many secrets of his character’s past and immersing the viewer in the moment.

Armed with the kind of twist you don’t see coming, yet you kick yourself for not guessing, Glorious is too long for a short film and with enough substance for a wholly satisfying feature. It might make a good episode in American Horror Stories or Creepshow. If watched in a theater, it might seem underwhelming. Nonetheless, it’s worth 78 minutes of your time. After debuting at Fantastic Fest, the movie will land on Shudder, the horror streaming service, which is a worthy home. McKendry and her screenwriters concoct an often funny and icky setup that pays off in unexpected ways, even if there’s a certain indefinable direct-to-streaming quality to the production. When it’s late at night, and you’re scouring your apps for something that’s not too much of a commitment and will keep your attention, Glorious will do the trick nicely.