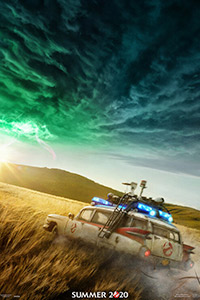 The recipe for nostalgia is tricky. Adding too much is like oversalting food. It burns a little. Ghostbusters: Afterlife begins with the ideal amount of seasoning. Helmed by Jason Reitman, son of Ivan, director of the 1984 original, the new movie feels like it’s in good hands—in the family, as it were. Some of the original cast returns to reprise their roles or make brief cameos, including Dan Aykroyd, Bill Murray, and Ernie Hudson as their ghostbusting characters. But the familiar faces don’t overshadow the talented newcomers. Dusting off the old Proton Packs and Ecto-1, the movie puts them in the hands of Mckenna Grace (Troop Zero) and Finn Wolfhard (Netflix’s Stranger Things), who play the grandchildren of Egon Spengler, the late Harold Ramis’ eccentric scientist. The filmmakers even include hints of Elmer Bernstein’s original score, giving us a few notes that bring us back into that 37-year-old world. And just when you think this nostalgia trip has been spiced to perfection, the screenplay by Reitman and Gil Kenan adds a few dashes that overdo it. Rather than serving the franchise to a new generation while satiating the original’s fans, the final act resorts to a veritable remake of the original film, leaving our palate scorched.

Sony has been trying to figure out what to do with Ghostbusters for years, leading to a long history of stalled sequels and reboots. Their most recent attempt to revive the intellectual property, Paul Feig’s 2016 letdown, resulted in backlash, mainly because the moviegoing public couldn’t handle the Ghostbusters reimagined by an all-female cast. Of course, the casting wasn’t the problem; the movie’s derivative story and downright unfunny comedy were. Ghostbusters: Afterlife suffers from a similar situation in the plotting department; moviegoers may experience a severe case of déjà vu here. But nostalgia and déjà vu are two entirely different conditions. The former uses our sentimental feelings for the past, whereas the latter feels like an experience we’ve had before. However, if you add enough nostalgia and callbacks, the result begins to feel suspiciously like we’ve experienced this already. What’s so disappointing about Ghostbusters: Afterlife is that it starts with a subtle application of nostalgia and ends with a case of déjà vu.

A prologue finds Egon, shown mostly in carefully placed shadows to conceal Ramis’ absence, living in a country house in Summersville, Oklahoma, and tangling with some dark spirits. After Egon meets his demise, his property goes to his estranged daughter Callie (Carrie Coon), a single mother with two children, the gawky teenager Trevor (Wolfhard) and the younger Phoebe (Grace)—the spitting image of her grandfather. Moving in for the summer, the family learns about what Egon has been up to, and more importantly, why a New Yorker left his family and relocated to the country. The movie’s first half patiently builds these characters: Callie, the perpetually exhausted and broke mother who’s still bitter about her absent father. Trevor, who pines after his burger joint coworker (Celeste O’Connor). Phoebe, who makes friends with a classmate named Podcast (Logan Kim), and the two of them bond with their summer school teacher, Gary (Paul Rudd)—who believes that “science is the safety pin through the nipple of academia.” 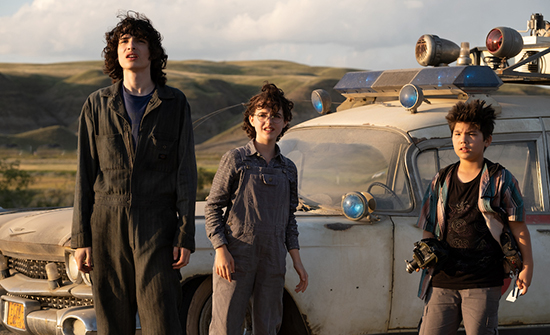 These quiet early scenes about a family trying to find its footing in a new town suggest that Ghostbusters: Afterlife will use the previous movies as a launchpad for something new (a relative term). They’re mildly funny but not what one might call outright comedic, yet they’re pleasant enough. The movie doesn’t feel like it’s trying to be a Ghostbusters movie, and that’s a good thing. Instead, it feels like something equally familiar: Spielbergian fare about a broken family that will repair itself by surviving some fantastical conflict (think E.T. The Extra-Terrestrial). But for a while, the movie loses itself in these relationships, treating them with a lighter vibe some viewers might not associate with a spooky Ghostbusters-brand comedy. Gary meets Callie, and a clear love interest develops. Phoebe, the wiz-kid outsider in her family, finally experiences some familial recognition after learning more about Egon, his big brain, and his past as a Ghostbuster. And aside from mild supernatural rumblings early on, the movie’s in no rush to get ghostbusting. That’s for the best—if only because what follows proves so derivative.

When Phoebe finally straps on a Proton Pack and faces down the movie’s end-of-the-world threat, the storytelling goes on autopilot. There’s another pair of devil dogs, another Gatekeeper, another Keymaster, another appearance by Gozer (played uncannily by Olivia Wilde), another structure built by Ivo Shandor (here played by a wasted J.K. Simmons) as a gateway to the netherworld, another appearance by a possessed Stay-Puft Marshmallow (many of them appear in a goofy sequence), another showdown between Gozer and the Ghostbusters, and another marshmallow-covered aftermath. Although most reboots or belated sequels incorporate elements of their predecessors to create nostalgia—see Rise of the Planet of the Apes (2011), Jurassic World (2015), Star Wars: The Force Awakens (2015), and so on—few reboots have so blatantly followed the story beats of their original. So it’s difficult not to feel cynical about the lack of creativity that Ghostbusters: Afterlife demonstrates when coming up with its central conflict.

Reitman’s direction is assured for the first half, just as the movie is patient. He and cinematographer Eric Steelberg create beautiful compositions against country sunsets, which is something I never expected to write about a Ghostbusters movie. But once the ghosts appear, the proceedings turn into a flurry of CGI and, of course, more callbacks. Even when Ghostbusters: Afterlife introduces something new, it feels like a nod to the original movies. Take Muncher, the semi-transparent blob that chews on metal and flies through the streets of Summerville in one scene. It’s such a thinly disguised update of Slimer that one struggles to explain why the writers didn’t just bring back everyone’s favorite Class 5 full roaming vapor. Finally, the climactic sequence suffers from the same problem as so many Hollywood products today: an unintelligible assault of computerized imagery that’s designed to look intense but just looks messy and ugly.

In the end, Ghostbusters: Afterlife is about digging up the past narratively, thematically, and commercially. When these characters travel from the city to the country, they follow an oft-used literary trope that symbolizes a journey into the past, where old tensions and conflicts find a resolution. Although the filmmakers are consistent in their themes, it doesn’t make the last act any more palatable. Around the time the movie limits the actors to parroting the original—most egregiously, Coon, a supremely talented actor, is forced to repeat Sigourney Weaver’s possessed performance—the result feels less and less like its own thing and more like a dull reference machine designed to be familiar but different. Maybe those unversed with the original Ghostbusters will enjoy the new movie. As someone who has watched the original regularly since I was a young boy, I wanted something new, not a repeat of the movie I have revisited countless times. I wanted nostalgia, not déjà vu.