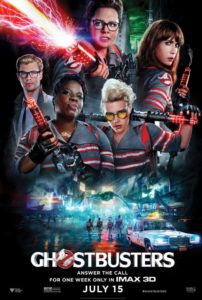 There’s a funny moment in the new Ghostbusters when Kristen Wiig reads YouTube video commentary aloud: “Ain’t no bitches gonna hunt no ghosts,” and then dismisses the comment as unnecessary. Since the first trailers for director Paul Feig’s all-female reboot appeared online, detractors have been vocal about their disdain for the concept of a female cast. Feig openly acknowledges and mocks the criticism in this scene; however, he fails to address or resolve what may become the most valid complaints about the film: it’s brash, poorly written, and completely unnecessary. Indeed, the four lady leads are actually the best thing about Feig’s comedy, whereas the film’s script is sloppy, its characters underdeveloped, and its reliance on the formula of the 1982 original is frustratingly unoriginal. In trying to pay homage, Feig’s film provides little more than an assemblage of recycled ideas presented by fresh faces for new commercial prospects. And rather than provide a showcase for the four comedian-stars (Wiig, Melissa McCarthy, Leslie Jones, and Kate McKinnon), the secondhandedness of everything onscreen spoils any possibility of Ghostbusters succeeding on the merits of the talent involved.

An unfortunate case of déjà vu lingers throughout the proceedings, as almost every plot point and character correlates to one in the original. Once again, white scientists studying the paranormal are sacked for the fringe nature of their scholarly pursuits, and then start ghostbusting for a living. Learned physicist Abby Yates (McCarthy) reluctantly joins her childhood friend Erin Gilbert (Wiig), and Erin’s weird-for-weird’s sake nuclear engineer friend Jillian Holtzmann (McKinnon), to go into business for themselves catching ghosts. Once again, the newly formed “Ghostbusters” adorn tan jumpsuits and convert a hearse into their company car. And while Feig may have reformatted the material for a female cast, he doesn’t do anything innovative in terms of race. Once again, the fourth Ghostbuster is also the sole (token) African American. Patty, played by Leslie Jones, is not an academic, but a streetwise subway operator the other three meet on assignment. After becoming a Ghostbuster, Patty occupies a racial stereotype in which she’s all buggy-eyed and runs from ghostly danger, harkening back to minstrel shows.

On the sidelines, the ladies hire a gimme-a-break dumb male receptionist in Kevin (Chris Hemsworth), whom Erin drools over. Feig uses Hemsworth as a comic non-sequitur in nearly every scene—from Kevin spitting out coffee to wearing glasses with no lenses, he’s present only as a running gag (until, that is, he becomes a plot device). The plot follows the same basic trajectory of Ivan Reitman’s original, enough to call Feig’s film a remake instead of a reboot. For some reason or another, paranormal activity in New York City has been going haywire. The Ghostbusters investigate and learn angry-at-the-world loner Rowan (Neil Casey) schemes to release the underworld realm on New York. Of course, the Ghostbusters must consult the nitwit mayor (Andy Garcia) and his bossy top aide (Cecily Strong) to justify their claims of an apocalypse. And by the finale, the power-packed foursome takes on a series of “ionized” apparitions, including a towering, familiar-looking baddie.

Feig’s brand of comedy may appeal to modern audiences, but it’s also the characteristic that diverges most from the original. The humor of Bill Murray, Dan Aykroyd, Ernie Hudson, and the late Harold Ramis may seem quaint and subtle compared to the over-the-top comic flamboyance composed by the director. Anyone familiar with Feig’s earlier work (Bridesmaids, The Heat, and Spy) knows his jokes are big, Big, BIG. He likes broad humor, particularly slapstick and trendy comebacks like “Really?” and overused lines like “Let’s do this”. At the same time, he also includes a cameo by Ozzy Osbourne who shouts, “Sharon, I think I’m having another flashback!”—a moment that feels more than a decade passed its prime. Lazy, throwaway moments such as these fill Ghostbusters, as well as cheapen it.

Feig’s bright cast is wasted on his frustratingly messy script, which he wrote alongside Katie Dippold. In the Ray Stantz role, McCarthy is best when she’s geeking-out over some paranormal tidbit. She’s also no stranger to behaving outrageously, having done so in Feig’s last three features, and she has a few typical blundering McCarthy moments here. If there’s a Peter Venkman in the proceedings, Wiig fits the bill, using her awkward shtick in scenes with Hemsworth. McKinnon might serve as an Egon Spengler-type, except she’s not so much nerdy as just random and strange, behaving like an incohesive oddball in a Saturday Night Live sketch that’s carried on far too long. Jones occupies the same role as Ernie Hudson once did, and that’s a shame. None of these characters feel real or endearing, they’re all one-note, and none have even the slightest character arc. And so, when Erin saves Abby in a climactic green vortex, what should’ve been a touching moment feels empty.

The other characters—the ghosts—range from familiar looking to kinda neat, and finally to nonsensical. Fans will groan about (re)appearances of Slimer and the Stay-Puft Marshmallow Man (What? No Viggo love?), but jaws will drop at the so-bad-I-can’t-believe-I’m-seeing-this appearance of Slimer’s wife (a character soon to join Jar Jar Binks and Skids & Mudflap as one of the worst movie characters ever). The ghosts themselves are rendered with top-notch computer-animation, often glowing in smoky, neon wisps of color. They look tangible in a computer-generated kind of way, but they hardly compare to the practical, almost touchable photography effects used to create ghosts in the original. The FX are even less impressive when the arbitrary “ghost” of a dragon appears. How is this a ghost? Does this Ghostbusters exist in the same universe as Game of Thrones? It’s best not to spend too much time thinking about these things. The filmmakers haven’t—there’s very little logic about how the ladies fight ghosts. In the original, ghosts had to be captured, trapped, and contained. Here, the chaotic finale vomits out a swarm of spirits, and our heroes blast ghosts dead (again) with laser guns and grenades, apparently with no further explanation required.

All the while, the franchise-ness of Ghostbusters radiates from the screen. Whether its McKinnon delivering an in-film Pringles ad or the four ladies enjoying a dinner of Papa John’s, the product placements appear throughout. Maybe I’m just reacting to the silly music video that plays over the end credits, but reboots are among the most commercially gratuitous, creatively uninspired products to come out of Hollywood. And yet, as a critic and moviegoer, I am not opposed to the very concept of a reboot; it’s just that, most of the time, they prove to be nothing more than grabs for cash. Every once in a while, something like Star Trek (2009) comes along and reminds us what is possible, but most of the time you end up with overly familiar nonsense like Total Recall (2012) or Point Break (2015). Studios treat beloved properties like the latest model of smartphone (Now with a new cast and modern CGI!); they make needless changes to reestablished old material and hope to make considerable bank on name-brand recognition.

In a way, we should admire Feig for trying something sort-of different; had the reboot been an all-male cast, Ghostbusters would have seemed even more unnecessary than it does. But the story, including cameos by almost everyone from the original cast (not playing their former characters), and all-too-frequent nods back to Reitman’s film, demonstrates how, despite his gender-swapped cast, Feig rests on the laurels of the original classic. Had the director made a completely unrelated supernatural comedy starring these four women, but not referenced the original Ghostbusters in any way, the result probably would have felt only mildly derivative—but no less annoyingly commercial. Instead, Feig’s reboot plays like another forgettable addition to Hollywood’s long-running nostalgia craze. Worse, the ghost-busting comes in doses of loud, busily filmed nonsense, and its humor is about as subtle as a pie in the face. Getting worse and worse as it goes, Ghostbusters offers a few laughs early on, but then descends into the worst kind of Hollywood product.