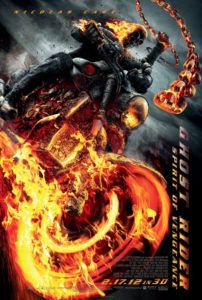 Give up any hope for qualities such as subtlety or nuance in Ghost Rider: Spirit of Vengeance. Everything about this sequel to 2007’s surprise box-office hit Ghost Rider was designed with the word “extreme” in mind. Returning to the role of daredevil-turned-demon-host Johnny Blaze is Nicholas Cage, who uses his familiar series of crazy-eyed howls and hand gestures for appropriately over-the-top behavior. The directing team Mark Neveldine and Brian Taylor (Gamer, the Crank movies), who I’ve always thought should be helming energy drink ads in Hell, shoot with an array of cockeyed angles, quick cutting, and handheld camerawork for intended—but not altogether successful—visual thrills. Topping off the movie’s “extreme” qualities is the 3-D presentation, which, much like the movie’s star and directors, is another gimmick that fails to deliver.

A pseudo-sequel that ignores almost everything that happened in the first one, the story finds Blaze hiding out somewhere in Eastern Europe, trying to suppress the Ghost Rider demon inside him. The demon wants to snack on souls of the wicked, but the cursed Blaze just wants a normal life. He’s promised that normal life by Moreau (Idris Elba, recent Golden Globe winner for Luther), a gun-toting, motorcycle-bound French monk who pledges to lift Blaze’s curse if he uses The Ghost Rider to track down a kidnapped boy and his mother (Fergus Riordan and Violante Placido). The boy, Danny, is a would-be vessel for one of Satan’s earthly manifestations, Roarke (Ciarán Hinds), whose corporeal form will die unless he transmigrates into the boy’s body. Roarke is followed by a cadre of nameless goons, including a white-haired baddie from the comics named Blackout (Johnny Whitworth); they’re out to capture the boy for a grandiose body-transfer ritual. But, of course, The Ghost Rider uses his fire-breathing, chain-whipping powers to stop them.

The script, assembled by three credited screenwriters, takes off in various directions but never feels cohesive within the 95-minute runtime. This is probably because Neveldine and Taylor approach directing the movie like they’re daredevils themselves. (This is not a point of admiration.) Their heavily publicized style has them running about their set or riding on motorcycles with handheld cameras, as both men concern themselves more with getting off-the-wall, energetic angles, rather than building on the story or reining-in their cast’s uneven performances. Amid several car chases and shootouts, shot after shot, they try desperately for an intense and “in your face” experience, but their efforts feel scattershot and disorganized. They subscribe to the notion that choppy editing and shaky camerawork and excessive close-ups are enough to involve the audience, but not every scene requires a zany angle. Their insistence on this technique forces me to wonder if they’re only making movies for those with the shortest of short attention spans—meth addicts and crackheads may enter; everyone else need not apply.

The Ghost Rider itself looks better than it did in the 2007 movie; the CGI used to render the character’s flaming skull and blazing motorcycle are impressive, even incredibly tangible—they look like they’ve been dipped in tar and set on fire, leaving a crispy, just-got-outta-Hell look. It’s a winning touch, even if other visual FX in the movie aren’t as effective. Take one of Blackout’s powers, which, along with the ability to decompose whatever he touches, is to surround his enemies in darkness. Neveldine and Taylor portray this with an intentionally blurry, almost walleye-vision lens that leaves such scenes unintelligible and dark, especially behind those darkening 3-D glasses. Along with Blaze’s almost-but-not-quite transformations into the Ghost Rider, where Cage’s face is distorted into a cartoonish half-skull, the FX overall, combined with the directors’ frenzied visual style, make the movie a headache to endure.

As Marvel comic-to-film adaptations go, this franchise is having a rough time. With any luck, in a few years, a studio will reboot the franchise with a different star and a revised mythology—just as Fox is doing with Daredevil and Fantastic Four. Although Nicholas Cage was always an inspired bit of casting, his performance is reminiscent of his frequent “paycheck roles”, as opposed to his more credible, Oscar-worthy work in Adaptation or Bringing Out the Dead. And as much as Cage will always have a soft spot in this critic’s heart, he’s just not trying here. Alas, though Ghost Rider: Spirit of Vengeance attempts to offer a new spin on this comic property without entirely rebooting the franchise, the result looks and feels thrown together, even if Neveldine and Taylor’s funhouse approach constitutes organized chaos.