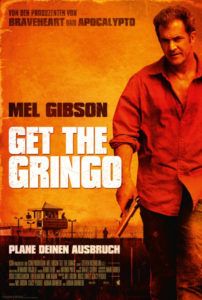 In Get the Gringo, Mel Gibson turns out another in a long line of tough-cookie-with-a-sense-of-humor characters. The former superstar actor, working under first-time director Adrian Grunberg (Gibson’s assistant director on Apocalypto), channels a dozen similar roles from Lethal Weapon to Payback as a mysterious thief named “Driver” in the script. In the opening scene of the film, originally titled “How I Spent My Summer Vacation”, Gibson’s character, donning a clown mask and behind the wheel of a jalopy whose back seat is filled with stolen cash, races toward the Mexican border, cops tailing close behind. He crashes through the border wall to perceived safety, but he’s picked up by Federales who cart him off to a dodgy Tijuana penitentiary called El Pueblito. There, he befriends a 10-year-old boy, schemes to recover his requisitioned loot, and helps the kid exact revenge on the Cartel-employed warden. What follows is part prison movie, part crime-centric actioner, part comedy, and part portrait of official corruption in Mexico. It never quite comes together, but it’s weirdly enjoyable for its eccentricities, and for Gibson’s proven capacity in such material.

The actual El Pueblito, shut down in 2002, was an enclosed Tijuana gutter made to house 2,000 inmates, but it ended up holding more than three times as many. Those in charge allowed the prisoners inside free reign; each inmate could pay to bring his family along with him, run back-room businesses, sell sex and drugs, and even carry guns. Of course, escape was just as unlikely as any other prison, given the surrounding wall and trigger-happy tower guards protecting the outside from the inside. Reading about the insanity of this place inspired Gibson to make a film about it, and along with Grunberg and Stacy Perskie, Gibson co-produced and co-wrote the script. Shot in an old Veracruz prison near where Gibson and Grunberg made Apocalypto, the film’s production designer Bernardo Trujillo built a completely believable stand-in for El Pueblito, a set teeming with countless extras and grimy details. It’s like someone took the filthiest prison ever constructed and merged it with a state fair.

As Driver finds himself among the open-air prison community of El Pueblito, Gibson’s gruff voice lays down narration like a film noir, except it’s lined with lighthearted banter written into the exposition. Driver’s levity about his predicament is fulfilled by Gibson’s oddball expressions and bouncy way of shifting gears from humor to aggression, but he’s also capable of becoming a daring hero when situations get rough. And they do. Shootouts with disgruntled inmates and verbal pissing contests with a nosy American embassy rep (Peter Gerety) give way to what is a  strange central plot given the circumstances: Driver’s youngster friend, credited as “Kid” (Kevin Hernandez, from The Sitter), is a former inmate’s son kept alive by the warden (Daniel Giménez Cacho), who desperately needs the boy’s liver for a transplant. Driver agrees to help the boy, and in due time redeems himself with the audience for his past crimes, whatever they may be (we never find out). Meanwhile, Kid’s mother (Dolores Heredia) becomes Driver’s no-nonsense sweetheart.

Early scenes where Gibson maneuvers around back alleys and through crowds of unsavory types, pick-pocketing as he observes El Pueblito’s more peculiar customs are fascinating. Exploring this ghetto-like world of crime encased in concrete, we constantly have to be reminded that we’re looking inside what was an actual prison environment—and one in operation in the recent past to boot! Energetically shot by Belgian cinematographer Benoit Debie (Irreversible), with just enough style that it doesn’t call attention to itself, the film goes back and forth between the prison’s world and the corny plot involving Kid’s liver. All the while, Driver’s enduring sense of humor feels somewhat insane in these conditions, ridden with vice and violence. Unfortunately, we never learn enough about the protagonist to understand his playful mindset, even if it produces a number of hilarious moments (Gibson deliver’s a spot-on impersonation of Clint Eastwood).

Gibson’s soured public image and underwhelming box-office streak as of late—Edge of Darkness and The Beaver were barely seen—forced this peculiar little project into a very limited theatrical and wide video-on-demand corner of the market. Out of Gibson’s last several films, however, Get the Gringo best approximates his older material that spawned our fondness for his string of slightly comic, hard-boiled heroes. His devoted fans will likely enjoy the mixed-bag result, which at least reminds us how affable a screen presence Gibson can be. His energetic and engaging performance is almost enough to make up for the film’s patchy tone, which never quite reaches the stylistic, darkly comic violence of Quentin Tarantino or the Coen Brothers. A more experienced director may have been able to find a balance between the shifting strains of humor and death, but that still wouldn’t fix some of the lackadaisical plotting and pointless narration. Overall, it’s certainly a watchable film, but also one easily dismissed.