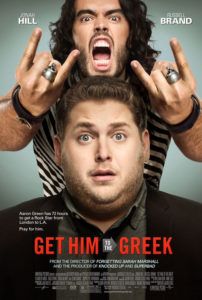 What makes producer Judd Apatow’s comedies work so well is that his otherwise despicable characters redeem themselves with a surprising amount of emotional clarity. They begin mean-spirited and morally debased, and somehow through a series of scatological gags and sex humor they wind up being people we approve of. The latest in Apatow’s man-love comedies is Get Him to the Greek, a pseudo-sequel to 2008’s Forgetting Sarah Marshall, helmed by that film’s director Nicholas Stoller. And sure enough, in the movie the characters do deplorable things to one another, and yet magically it’s all forgiven in the end.

The only problem is that the usual formula feels stale this time, as though the movie was trying too hard to achieve its sense of out-of-control lunacy. Consider the plot, which involves lowly record label lackey Aaron (Jonah Hill) escorting legendary rock star Aldous Snow (Russell Brand, reprising his role from Forgetting Sarah Marshall) to an anniversary concert at the Greek Theater in Los Angeles. Along the way, which is filled with all sorts of debauchery and wily antics, Aaron and Snow become buddies by working through their respective relationship troubles.

But we’re not really watching for the emotional clarity that comes in the finale, are we? A movie about the philandering, drugged-up Aldous Snow is filled with absurd faux music videos, such as the one for his latest flop single “African Child”, in which Snow appears as “White African Space Jesus”. Meanwhile, his ex-lover Jackie Q (Rose Byrne, in an uncharacteristically wild comedic role) has an anal sex preoccupation with videos for “Supertight” and “Ring ‘Round”. You’ll also find a number of made-up songs by Infant Sorrow, Snow’s band, and some of them, such as “The Clap”, sound pretty darn good for being written for a movie. In addition to cameos by Pink, Christina Aguilera, and other industry faces, there’s a role of the madman executive Sebastian filled by Sean ‘Diddy’ Combs, which plays out as though the filmmakers said, “What weird crap can we get Sean Combs to say!?”

The movie wants so bad to be this year’s The Hangover that there’s even a brief and raunchy-as-ever interlude in Las Vegas. Featuring Colm Meany as Aldous Snow’s washed-up father, the sequence has a plethora of (you guessed it) topless bimbos and drug use, more than the rest of the movie combined. But Get Him to the Greek won’t be as successful as The Hangover, as the moments of hilarity here are attached by a thin layer of connective tissue that doesn’t hold the meat of the story together. Bouncing from London bashes, to Vegas, to a three-way between Aaron, Snow, and Aaron’s overworked nurse girlfriend Daphne (Elisabeth Moss) just becomes exhausting, and there’s little to keep us invested for the duration.

In true Apatow movie form, the bawdy material is balanced by an appropriate level of heart. Things get serious in the third act when we realize Snow is a broken man, a figure who places all of his effort into himself artistically, so that off-stage he can’t help but recoil with drugs and alcohol and bad personal relationships. Much like Apatow’s Funny People, which explored a similar conundrum with Adam Sandler’s stand-up comedy character, the superstar is stricken with fame like an illness. And while it was easy to feel for Sandler’s character because he suddenly thought he had a fatal disease, Snow chooses outright to waste his life away on his vices. And despite the idea that drug and alcohol addictions are diseases, the script, also by Stoller, suggests Snow makes a conscious choice to use.

No matter what truths the movie offers about the rock ‘n’ roll lifestyle (which are few and not very insightful), the movie fails to do more than provide 109 minutes (about twenty-minutes-too-long) of raucous laughter (most of it very repetitive and based in the realm of exposing Hill’s character to an overabundance of illegal substances). So consider this a none-too-enthusiastic recommendation from a critic who wholeheartedly enjoyed Forgetting Sarah Marshall and most Apatow-produced comedies. Get Him to the Greek will make you laugh, but by no means does it live up to the Apatow standard that requires high praise and multiple viewings.