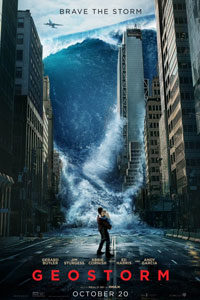 With profound disappointment and sadness, this critic must report that no such “geostorm” takes place in the disaster movie called Geostorm. Given Nature’s recent outpouring of earthquakes and hurricanes that have left dozens dead and countless more displaced in 2017, the poorly-timed spectacle features the annihilation of several major cities by extreme weather, many of them juxtaposed against the setting’s usual climate. A snowy Russian setting is beset by a devastating heatwave. An Afghanistan village normally running temperatures over 100 degrees Fahrenheit is frozen by an inexplicable burst of frozen weather. The desertous surroundings of Dubai are overcome by a towering tsunami. Less disjointed events include Manhattan submerged in water, Orlando rocked by lightning storms, and Mumbai beset by an onslaught of twisters. But none of these freak occurrences amount to the “geostorm” promised by the title. For nearly two hours, the audience waits for the much-talked-about “geostorm,” enduring inane dialogue and hammy acting by Gerard Butler and Jim Sturgess, but no such global catastrophe occurs.

From director Dean Devlin, Geostorm revels in mindless destruction and a body count that must be in the millions. It’s a common trend for the filmmaker. Devlin’s heyday arrived in the 1990s alongside his writing and producing partner, disaster artist Roland Emmerich. Together they unleashed a series of blockbusters, most of them devoted to the idea of worldwide destruction. From Universal Soldier (1992) to Independence Day (1996) to Godzilla (1998), the Devlin-Emmerich pair collaborated through 2000’s The Patriot. After a fifteen-year break, they reteamed for the belated sequel Independence Day: Resurgence (2016). Devlin makes his directing debut on Geostorm, aping his former partner’s style, which, of course, was merely a second-rate attempt at Spielbergian excellence and scope. The movie also borrows much from the long tradition of Hollywood disaster fare, particularly those of the late-1990s variety. Michael Bay’s Armageddon (1998) will undoubtedly come to mind, given Geostorm‘s combination of spatial science-fiction and planetary ruin.

Devlin and co-writer Paul Guyot concoct a progressive idea that, despite its well-intentioned cautionary tale about our current global warming crisis, results in any such message being lost on the weak plotting and dramatics. In the near future, a series of natural disasters leads to an American-led international effort to construct a net of weather-controlling satellites, called “Dutch Boy.” Invented by Jake Lawson (Butler), the satellites use lasers and other futuristic gizmos to prevent harsh or dangerous weather. Just after Dutch Boy’s implementation, Jake finds himself removed from the project for his no-nonsense attitude, only to be replaced by his political stooge-of-a-brother, Max (Sturgess), leading to the script’s belabored sibling rift. Devlin and Guyot remain incapable of creating even one character worth caring about.

In typical science-fiction fashion, the central technology in the movie goes haywire, causing aberrant climate events around the planet. Only one man can fix it, of course. Max, with the help of the president (Andy Garcia), must convince Jake to return to the Dutch Boy space station orbiting Earth and investigate the malfunction. With the help of the station’s crew (including Alexandra Maria Lara and Eugenio Derbez), Jake discovers the satellites have been sabotaged with a computer virus, while in Washinton, Max conducts his own investigation with the help of a wise-cracking techie (Zazie Beetz) and his Secret Service lover (Abbie Cornish)—whose fiancée status becomes an annoyingly recurrent talking point. Ed Harris also appears as a politician in a conspicuous supporting role. Eventually, the conspiracy at the center of Geostorm turns the movie into a shoot-em-up resembling Emmerich’s White House Down (2013).

As Dutch Boy succumbs to the computer virus, our heroes discover a plot to unleash a storm on a planetary scale. You might even call it a “geostorm” (the characters do). The foreboding promise of a “geostorm” comes complete with a red digital countdown, and the movie’s characters scramble to prevent impending doom and discover who’s behind the dastardly scheme—and it’s no surprise, given that some of the early weather-attack targets include American “enemies” in Russia and Afghanistan. At the same time, the above-referenced topsy-turvy weather events cause untold human death in cartoony CGI wreckage. Buildings in Hong Kong topple like dominos, suggesting a distasteful level of kitsch to falling skyscrapers; Japan suffers vehicle-sized hail. The special FX wizards seem to have had one helluva time animating mass destructions with little feeling for the human toll. Fortunately, when the movie introduces a young Indian boy who loses track of his canine best friend in a storm, the filmmakers know enough to provide a heartfelt reunion.

Geostorm offers a few unexpected, if ironic delights. If you’ve ever wanted to see Ed Harris lift an RPG launcher from the trunk of a car, this is your chance. If watching Gerard Butler propel himself through the vacuum of space in scenes from a C-grade version of Gravity (2012), then you’ll be delighted. In most other ways, the movie feels like a cheaper version of an Emmerich film, and far less technically cohesive (the three credited editors lacked a clear vision among them). Worse, due to poor test screenings, the production was delayed as Warner Bros. hired a replacement director and writer to oversee extensive reshoots, lending to a patchwork quality to the proceedings. The outcome may contain a welcomed message about taking responsibility for and care of our planet, but enduring an American exceptionalist perspective for an American-centric critique of policy, despite the worldwide consequence of everything onscreen, seems troublesome. This confused political status remains secondary to the utter stupidity of everything onscreen, and the tired tropes of the Hollywood disaster movie that Geostorm fails to enliven.