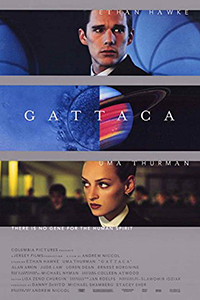 In Andrew Niccol’s feature debut, Gattaca, the writer-director crafts a paranoid, discriminatory world out of ripped-from-the-headlines science. Adopting a noirish mood amid an austere dystopian backdrop, it’s the sort of Orwellian vision that could only exist in a movie. Every detail—including the sleek production values, retrofuturist designs, and character constructions—explores the dangers of eugenics. Indeed, Niccol’s film involves a world so obsessed with genetic perfection and eliminating any unwanted hereditary flaws in a lab that its society has been completely reshaped around this premise. Released in 1997, the film tapped into society’s fear of genetic tampering that followed the launch of the Human Genome Project in 1990, rampant discussion of cloning throughout the decade, and prescient fear of gene editing long before the recent births of CRISPR babies. But Gattaca operates better on world-building and conceptual levels than on narrative terms. While initially thought-provoking, it’s the sort of setup that prompts the viewer to nitpick afterward. The film raises questions without convincing answers, and ultimately, it proves only superficially interested in its characters and is compelled instead by intriguing concepts.